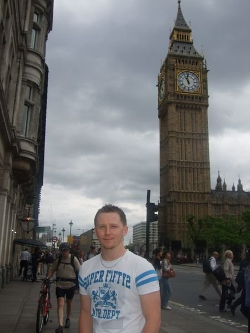 This site is (for the most part) a politics-free zone.

These days I try to avoid political talk because experience and maturity have taught me that it accomplishes nothing other than getting people upset over things that they have no control over.

And the sad fact is many people just simply cannot handle different opinions.

It’s astounding that people will ‘disavow’ or declare war on you just because you prefer chocolate and they prefer strawberry.

Of course, I have broken my no-politics rule once before here (in my controversial post about the political nature of Esperanto and why I refuse to learn it). It hurt a few feelings.

I’ve decided to do it again today regarding some of the reactions I’ve seen to Brexit (Britain’s decision to leave the EU). My social media feeds are littered with comments from people who are either a) jubilant, b) enraged, c) near-suicidal or d) wondering what the fuss is all about.

Search #Brexit, #Remain, #Leave or #LondonStays on social media if you’ve not been paying attention to the hysteria.

In truth, Brexit was a remarkable demonstration of functioning democracy against the odds where a majority of Brits rejected foreign rule through a simple binary vote.

For some in Europe (and a lot of the media) Brexit is made to look like the world is on fire but for the majority of others (and certainly for many outside Europe), the reaction is much more positive.

“That’s wonderful. Good for them.”

It seems that in every part of the world except Europe, independence is cause to bust out fireworks and raise a glass.

But European millenials have been raised and conditioned to see anything that opposes bloated federalism through a lens of fear. Their logic just doesn’t make sense: freedom, less corrupt government controlling their lives and lower taxes are somehow the same as (or will lead to) a 1940’s-style tyranny.

It’s beyond absurd and pure hysteria.

Now, I have actually heard some suggest that we in Australia, America and elsewhere see it all differently because the media doesn’t portray the full truth of the situation internationally.

I disagree strongly and take offence to that. That implies that people are incapable of looking at the facts themselves and making up their own minds.

The truth is we see it differently because we were raised differently to most European millenials.

We were raised better. [cue outrage]

It’s hard not to notice the flood of ageist and classist diatribe against tens of millions of people (certainly not a fringe group!). For me, the issue is not about the pros and cons of #Leave and #Remain, but rather about attitude.

That’s why I’m writing this today.

Frankly, it makes very little difference to me as an outsider whether the EU exists or not (European countries, languages and cultures will be still there regardless and it won’t affect my travel plans). The world economy will briefly dip with uncertainty and then rise again.

What bothers me is the repulsive classism I’ve seen so much of lately and during my travels.

I define ‘classism’ here as intellectual elitists looking down their noses at ordinary people (who don’t have to necessarily be working class).

I don’t even like to use the word ‘classism’ but it seems to be the best way to describe it.

People who are always the most vocal about standing up for oppressed minorities also tend to be the most vitriolic and nasty when talking about the “uneducated”, those they disagree with and even at times the elderly.

They rail against “hate” but if you disagree with them, they’ll hate you with the force of a thousand suns and insult you on every level.

I see so many spoilt, adult children raised in and poisoned by a toxic culture of entitlement go out of their way to insult ordinary people who according to them aren’t smart enough to make decisions. They believe that the world would be much better off if there were more intellectuals pressing the buttons.

Intellectuals + power = always an unmitigated disaster (here’s a great read for you).

If I’m completely honest, one of the main reasons why I have less and less to do with Europe these days as far as languages go is not because I’m not interested in European languages (I very much am) but rather I simply cannot stomach European politics, ambition-killing entitlement mentality and what it’s done to so many EU millenials’ attitudes.

And many of my friends in Europe agree.

The same intellectual snobbery causes problems everywhere in the world

I once talked about my severe disdain for Western “enlighteners” who try to impose their notion of progress on other countries and cultures.

“One thing I see all the time in just about every country I visit are the Western bleeding hearts who see it as their duty to enlighten the rest of world of what they believe to be the truth.”

In just about every part of the world I’ve lived in, I’ve seen the same pattern of ‘holier-than-thou’ snobbery time and time again. A few recent examples I’ve encountered:

Who are you to say that your intellectualism has made you better than everyone else?

These people are what I call the 21st century equivalent to missionary zealots centuries ago who believe their mission is to carry their intellectual enlightenment to the ‘primitives’ of the world.

They’re the most culturally ignorant and downright irritating people on the face of the planet, full of head knowledge (zero original thoughts though!) and obsessed with propagating their ideas and theories to the world’s masses.

They treat people from all these cultures as though they aren’t smart enough to succeed on their own. Intellectual ideas can solve all their problems and make their societies what they should be.

They were never invited and they’re certainly never appreciated for inviting themselves.

So getting back to Brexit…

I see so much of the same arrogant, intellectual classism.

I made the mistake a few days ago of chiming in on a tantrum by ‘Britain’s most multilingual student‘ and his followers that really exemplified my point. Ordinarily, I wouldn’t even pay attention to it but since he’s been the most vocal (tantrum-throwing) Internet polyglot railing against those who are ‘not intellectual enough’, I saw it as worth responding to.

Yes, I totally understand that some people are upset.

I get upset too when I vote for the losing side in politics. It happens to everyone at some point in their lives and you just accept it as “the people have spoken” and move on.

But many EU millenials are so conditioned by entitlement fever and an intellectual superiority complex that they don’t seem to be able to grasp that no means NO.

So they go on tirades about how the peasants are “anti-intellectual” and insinuate that people who are intellectual can fix the world’s problems (I’m still trying to find a single example in history where this has actually been the case).

People who not only think they know better than everyone else, but also deserve power and the decision-making monopoly because they know better than the plebs (ordinary folk). On the contrary, the plebs collectively know far more about the real issues than any of the out-of-touch intellectuals do (again, I highly recommend this book on the topic).

That’s exactly why anti-Brexiters have, among other things, been talking about holding a 2nd referendum so they can get the right answer – similar to the way the Irish were forced to vote twice in 2008 on the Lisbon treaty (as well as the way the French and Dutch were treated).

The excuse was and is always the same:

How about you just get rid of democracy altogether and save yourself some time?

The sooner people realize that it’s the intellectual ‘world fixers’ who are causing most of the world’s problems in the first place, the better.

Now that that’s off my chest… Back to languages… 🙂