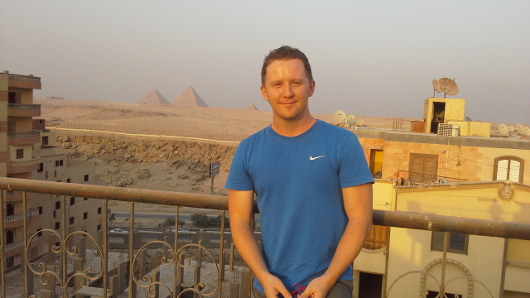 Leading up to my flight here I was getting the same reaction from almost everyone – is Egypt really safe for foreigners?

Are you sure it’s wise to go there?

I’m certainly no expert on Middle East politics but what I can do is tell you how I feel living here at the moment.

First of all I don’t really feel any different now in 2014 than I did the first time I arrived here back in 2002.

Let me say up front that Egypt is and always has been my favourite place to visit. The people here are some of the most hospitable and friendly that I’ve met anywhere in the world.

I feel at home here.

North Africa and the Middle East have always been unpredictable but as we’ve all seen in recent months and years there’s been a lot of turmoil in the region:

Egypt of course has gone through a roller coaster of political upheaval over the last couple of years and even though there seems to be a stable government now in power, the revolution is still fresh in peoples’ minds and I think it’s too early for anyone here to say what’s ahead.

As my Egyptian friends have been telling me there are still a lot of frustrated and angry people here after everything that’s happened and this is compounded by the fact that the economy is in a pretty bad way at the moment.

As well as the economy, electricity cuts out every day here in Cairo (it’s really annoying!) and I’m told by a lot of people that this is at least partly because the Qatari government who supported the ousted Brotherhood cut fuel exports to Egypt in protest.

Again, I’m no expert on this but it’s what I keep being told here.

You can tell that there’s definitely more of a security presence on the streets here now (e.g. more concrete barriers to prevent car bombs around buildings, heavily armored soldiers guarding many places, the closure of Sadat metro station in Tahrir (it’s so annoying having to transfer at Shohadaa station instead on a hot train packed full of people! :() and so on).

But apart from these things life goes on as it always has and Egyptian kindness and hospitality are always the same.

Okay so I had two bad experiences here last week.

The first time was when two guys tried to take my wallet (it was kind of my own fault for being stupid enough to get into the situation) and the other was a group of young guys calling me ‘yahudi’ (Jew) and telling me to ‘itla3 min musr’ (get out of Egypt).

To have two shitty experiences in the span of a couple of days was disheartening to be honest. It made me question whether Egypt had gone downhill since the last time I was here.

But after thinking about it for a while I realised that I was actually just very unlucky.

These are very rare instances and I just happened to be in the wrong place at the wrong time.

I’m absolutely certain that walking alone at night through big cities like Sydney, London, Paris (or probably just about any city in the US) is far more dangerous than walking through a city like Cairo.

There are more murders, bashings and robberies in those places than there are here without a doubt.

Sure, you get the occasional ‘nasab’ (نصاب) trying to get money out of you in a place like Cairo but as a foreigner you very rarely feel physically threatened by anyone.

I admit that for the first time I did have some doubts and concerns about coming to the region because of all the current news but shortly after arriving here I realized that those fears were mostly unwarranted.

I’m not saying we should disregard headlines entirely but it’s not wise to let the media scare you away from travel.