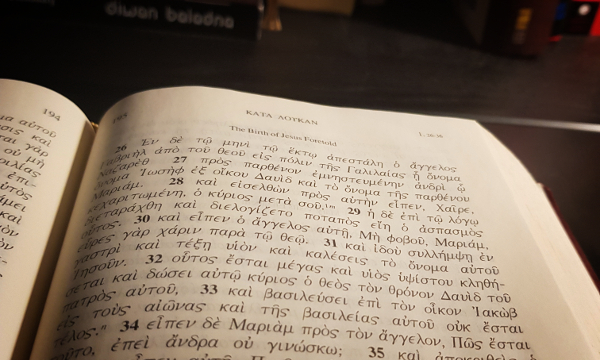 I hope you had a great Christmas and New Year celebrating wherever you are in the world!

We had our son’s first Christmas which was really special! (although I suspect he was probably more interested in wrapping paper than new toys at his age) 🙂

We also got to spend another fun month holidaying back home in Australia. A good but busy end to 2017!

With lots of tentative travel plans to share with you soon. 🙂

Normally, every year at around this time I come up with a routine idea for New Year’s language learning resolutions.

“How to plan/prepare/accomplish your language goals for the New Year.”

But I think that New Year’s resolutions rarely work out for most of us. We tend to forget about them by about February!

So not this time.

But I did want to share with you one of my own personal goals that I’ve set this year which I’ve been itching to get started on for a long time now.

And that is: Greek.

My goal for 2018 is to learn a spoken language and its written ancestor simultaneously.

What is Koine Greek?

It’s not a brand new language for me.

As I’ve shared often in the past, the first foreign language that I attempted as an adult (in college) was a language that’s no longer spoken.

Koine (Κοινὴ – ‘common’) Greek was the global lingua franca (similar to the way that English is now) from the time of Alexander the Great to a few hundred years after Christ. It was spoken across most of the developed world at the time.

Half the Bible was originally written in it (all the original Gospel accounts and letters).

So historically speaking, it’s probably the most consequential language in history as it facilitated the early spread of Christianity across the Roman Empire and changed Europe.

I took this language in seminary before taking up linguistics.

I flunked the first year completely and it wasn’t until I started developing a visual-spatial learning strategy for myself that I went from a total failure to a grade A student at the time (I explained that here).

I originally wanted to master Κοινὴ Greek back then and even continue on to a PhD but as you know, I ended up taking a very different direction with Arabic.

So I’m just now arriving back at the point of picking up where I left off.

I still don’t quite know just how rusty I am but I’ll soon find out (although as I often say, if you learn a language properly the first time then you never truly forget it). 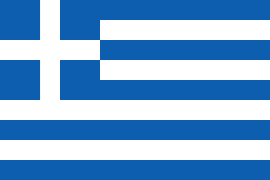 This time I’m not limiting myself to Κοινὴ.

I’m taking up Modern Greek at the same time and aiming for conversational fluency this year.

Κοινὴ evolved into Byzantine/Medieval Greek and ultimately evolved into the Greek that we have today. Unlike Old English and Modern English, I’ve been told (and correct me if I’m wrong on this!), Κοινὴ is quite intelligible to modern-day Greek people.

So I’m fairly certain there’s a strong advantage for me here if this is the case.

This will be the first time (another experiment) where I’m using an ancient language as a foundation to learning a modern, conversational language.

There may be drawbacks however.

No doubt the vocabulary and syntax have changed significantly over time so I’m assuming it’ll be tough dealing with interference between the two (where one language confuses the other).

This is why, by the way, I usually don’t advocate learning two languages simultaneously – especially ones that are so similar.

So why Modern Greek then?

It’s also just time for me to take up a new challenge as I had a long break over 2017 for language learning and 2016 was too hectic to accomplish much (getting married and all).

I’m itching to get back into language study. 🙂

So Greek it is.

Initial resources for learning Greek and my method

I’m amazed at how much my own language learning strategies have improved over the last decade.

I’ve developed strategies for learning that I never had a chance to implement when I originally learned Greek in college (and in retrospect would have saved me a LOT of time and stress).

For example, I came up with an approach called ‘chunking‘ (developed on the back of Michael Lewis’ Lexical Approach) which has been enormously successful for me personally and has also grown a lot in popularity over the last few years (other language bloggers have even adopted it from me).

Admittedly, everything I’ve applied is for spoken languages.

But I’ve never had a chance to reapply this learning approach to the ancient/written languages I took in my earlier years.

So I’ll be sharing my results and methods as I go along.

Resources I’m starting out with:

I’m starting back with my very first textbook for Κοινὴ Greek. It’s an older edition but I may purchase the newer edition soon that has an audio component.

One thing I’ll be doing differently is focusing on the English -> Greek translations (i.e. producing the language). I didn’t do much of this in college because it was widely regarded as unnecessary (why translate into a language that nobody speaks anymore?) but now I have the experience to know otherwise.

For vocab training, there seem to be some great courses up on Memrise that I’ll make use of at least initially.

I’ll also be creating my own audio tracks (more on how I do this later).

As for Modern Greek, you’ll be surprised to hear that I’ve decided to give Michel Thomas a second chance.

Yes, you read that correctly. 🙂

My MT review ended up being one of my most controversial posts and positions yet (people either strongly agreed or strongly disagreed). Some think I was very unfair because I reviewed the Arabic edition and therefore must of had a pre-conceived opinion.

Hodder Education actually contacted me about my review.

They offered me another free sample – MT Total Greek – to give the product a second chance.

I’ve decided to do that.

I’m going to start by going through the MT Greek audio course exactly as they recommend I do and then see at the end just how much Greek I’ve learned. As far as modern, conversational Greek goes, I know absolutely nothing.

So I feel like a complete beginner even though I may have some familiarity with Greek and be able to recognize words from Κοινὴ.

Later on I’ll take an italki conversation lesson to test my results.

For a change, I want to keep this is as simple as possible in the beginning so I’m not going to overwhelm myself with Greek resources until I complete the MT audio course and assess its true value.

But trends seem to be changing fairly quickly.

Although I’ve experimented a little bit here and there with podcasting and video, being the absolute contrarian that I am I’ve tended to stick with what I like and what I’m good at despite what everyone else is doing.

But I’m committed to being more adventurous this year.

I’ve decided to spend more time on other platforms getting my message out in different ways – in addition to writing.

So I’ll be sharing more about this soon and I’ll update my progress with Greek on other platforms.