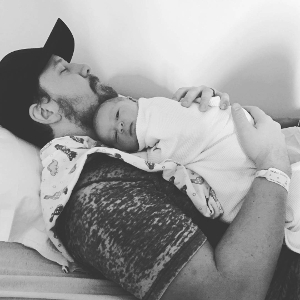 You might remember that back in July last year I shared two huge updates with you:

2) We found out we were going to be parents for the first time.

I was beyond excited to share these personal announcements with my long-time readers here and got some really touching well-wishes from many of you (thanks!).

Well, just over two weeks ago we welcomed our son, Aidan (Irish: Aodhán) into the world and here he is!

Our healthy little ball of cuteness. 🙂

It really is the most amazing feeling in the world being a dad for the first time and as I’m sure every parent knows, the total exhaustion is tough but it’s so worth it.

Of all the adventures and travels I’ve had, this is the most exciting by far!

Raising Aidan multilingual is going to be hugely important to me so I’m looking forward to sharing my research and discoveries with you over the coming months and years.

And this is good since I get a lot of emails from parents asking about resources for kids!

Obviously all of this has kept me pretty busy lately (understandably) and distracted from a lot of other things I’m normally focused on including languages but I thought I’d drop a quick update as to what I’ve had my team working on in the meantime.

There are some pretty exciting things ahead this year.

It was about this time 2 years ago that I rolled out TalkInArabic.com for the first time.

Rough around the edges admittedly but it attempted to answer the cries of many totally frustrated Arabic students who were looking for resources in the Arabic dialect they wanted.

In case you’re late to the party, TalkInArabic.com is a community-driven site that provides learners of Arabic with a constantly-expanding resource for (currently) 8 different varieties of Arabic.

The Arabic that native speakers actually use.

There’s always been a disappointing lack of spoken dialect resources for the 15 years I’ve been learning Arabic while nearly everything on the market is for Classical or Standard Arabic (which nobody actually speaks as a first language).

Since its initial announcement, TalkInArabic.com has had thousands of members join from all around the world.

The interest has been steadily growing.

But there have been major problematic issues (many raised as feedback) that we’ve frankly taken too long to address:

1) The site navigation needed to be totally restructured.

2) Absolute beginners were struggling with ‘where do I begin?’ as the content was (intentionally) not designed to be a linear course so beginner material ended up buried beneath content that suited higher-level learners more.

3) There’s been an imbalance of dialect content (due primarily to demand). For example, we tried to put the majority of attention on Egyptian and Levantine because it’s what most people want and ended up giving other dialects less attention (a mistake).

4) No free or limited trial.

5) No easy way for students to communicate directly with native teachers for help.

Everything just needed to be simplified, clarified and more modernized.

So, a few months ago we started a contract with some high-end designers and developers to give TalkInArabic.com a brand new look and to respond to all the concerns I just mentioned.

This should hopefully start to be rolled out in 3 – 4 weeks time (insha’allah!).

And… (what I’m most excited about)

It looks like I might be heading back to Jordan in the coming months to potentially open up a TalkInArabic.com office in Amman.

Before its inception, my goal with TalkInArabic.com was to focus on providing refugee and struggling families with employment (something I’ve always been deeply passionate about). In fact, we originally began the project with a group of Syrian refugees living in Cairo while I was living there.

I recently sat down with the leader of a large humanitarian program in Jordan and we came up with some great ideas for working together.

This is a program that assists refugees with finding work so I’m thrilled to potentially be a part of helping people rebuild their lives.

These plans will become more concrete as we get closer to June (don’t want to be overly assumptive until we really look at the logistics of it all) but I’ll update you here on what happens.

Also FYI: in order to cover a lot of the website development and hiring of permanent staff, the subscription cost of TalkInArabic.com is likely to increase with the release of the new site.

The existing low monthly subscription fee will continue for current members and not change (so make sure to join before the new rollout if you haven’t already).

Where else from here?

Right now my new son has most of my attention. 🙂

And will for a while.

But I’m realizing that I need to spend more time here on The Mezzofanti Guild as well on my passion for language learning. If I’m honest, it really kills me to go too long without language study and being able to produce new content for my subscribers here.

This is probably the longest period of blogging inactivity I’ve had since I began in fact.

For those of you who have emailed me and not received a reply, I’m working on it! I have an inbox FULL of emails that I haven’t replied to but fully intend to. 🙂

I’ll update you on potential plans for Jordan and the new TalkInArabic.com rollout soon.