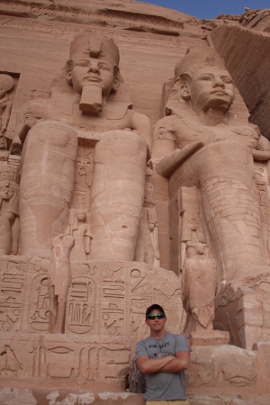 I’ve finally arrived back in Cairo after an amazing journey down to Nubia in the far south of Egypt along the border of Sudan (hence the lack of updates the last few weeks!).

I had originally hoped to go into Sudan as well but I’ve decided to postpone that for a later trip.

Although I’ve stayed in Egypt several times over the last 12 years, this was actually the first chance I’ve had to venture down this close to the Sudanese border and I’m sure it won’t be the last.

The hospitality and friendliness of the Nubians left such a good impression on me that I’ve decided to look into moving my “office” there for a while from Cairo. 🙂

Not only is the area stunningly beautiful (much more than Cairo) but it will give me a good chance to experience and learn a very different ‘flavour’ of Egyptian Arabic as well.

The accent the people speak south of Aswan was more of a challenge for me even at my level in Egyptian but I found it so incredibly fun and interesting to listen to. Hopefully next time I’m down there I’ll be able to collect some sample recordings for you so you can hear the difference (Nubians actually have their own native languages so of course their Arabic is influenced by them as well).

I had zero time to do any Arabic study on my trip unfortunately but the enormous amount of speaking practice with locals made up for it anyway. 🙂

Now it’s back to work!

I gave it a lot of thought on my trip and made an important decision today.

The Arabic project that I’ve talk about quite a lot this year was ideally meant to be finished and announced back in June but due to all the moving around I’ve done and some other distractions, it’s unfortunately faced quite a few delays in getting finished.

So I’ve decided to do something special for you…

Since I get questions each week asking about resources for spoken Arabic and I know for a fact that what we’ve already put together will be extremely useful for a lot of you, I’ve decided to announce the project and share it with you early – while it’s being developed.

This basically means that you can make use of it while it’s being worked on and also help us steer it in the right direction at the same time.

I’m confident that what’s been put together so far will impress you and help you a lot even in its unfinished state. It’ll also give us a chance to hear what you think (feedback, suggestions and so on) so we know what to focus our energy on as a top priority.

If you’re learning a spoken dialect of Arabic then this will help you.

When will it be announced?

I won’t be posting anything about it here on the blog for sometime so if you’re interested and want to be informed then you need join at the top of this page (select the language you’re learning, enter your email and click ‘Join’).

I’ll send out an email next week explaining in detail what it’s all about.

UPDATE: I announced it and it’s been a huge success. The project’s called TalkInArabic.com (here’s a learner’s review).