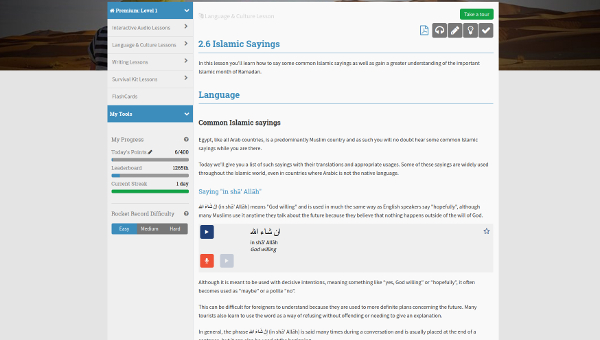 I recently had the opportunity to try out and sample the Arabic edition of the well-known Rocket Languages series.

This series has been around now for over 15 years and since I have expertise in the Arabic language, I like to test the effectiveness of as many courses and books for Arabic as I can.

So I was more than happy to sit down and comb through Rocket Arabic.

Now, I should note from the outset that unlike some of the other language editions, Rocket Arabic at this time only provides Level 1 (other languages like Spanish have 3 levels).

This means that the course might not be suitable for some Intermediate+ learners. If you are looking for something more challenging then I’d recommend TalkInArabic.com as an alternative.

As you’ll read below, I’ve put Rocket Arabic under the microscope so that I can share my overall impression with you.

Here’s a video demonstration that I put together a while ago (an earlier version which has since been significantly improved):

If you’ve used Rocket Arabic, make sure to comment below!

And through no fault of their own.

They’ve had an issue for a long time with unrestrained marketing partners who spam websites and YouTube with phony ads and recommendations to make a profit. There are still loads of sneaky “review” sites that you’ve no doubt had to sift through to get here.

For this reason, I refused to review Rocket Arabic for a long time (even tweeting this out at one point years ago):

Anyone leaving links to Rocket language products on my site are instantly banned. Constant spam from their affiliates. @rocketlanguages

Fortunately, this has nothing to do with the company itself.

They just have poor control over their marketing partners who abuse the system and get away with it.

So word of caution: don’t believe every gleaming recommendation you read online.

The difference between Rocket Arabic and Talk In Arabic

I should add a disclaimer here to say that this our resource for learning spoken Arabic (8 different varieties).

But I have actually had questions from people before asking me what the difference is or which one is more suitable for specific learner types.

In other words, it assumes that you’ll go from Lesson 1 to Lesson 2 to Lesson 3 – right through to the end. The course doesn’t restrict you if you don’t want to do this but it’s intended for that purpose.

TalkInArabic.com on the other hand is a non-linear audio and video resource – you learn how you want with constantly-updated material.

Every week, there are new lessons added.

With Rocket Arabic, although comprehensive, it’s not a dynamic resource (not updated frequently).

That’s the difference in a nutshell.

On the issue of Arabic dialects and Rocket Arabic

This is the most well-known and widely-understood dialect of Arabic due to the majority of media being of Egyptian origin.

If you travel anywhere in the Arabic-speaking world and use Egyptian, people will generally understand you without a problem.

Important point: This doesn’t mean that you will understand them however.

But this is a valuable selling point for Rocket in my opinion.

They teach a spoken, natural variety of Arabic unlike so many other courses and books which teach Modern Standard Arabic, a dialect that nobody anywhere speaks as a native language.

Rosetta Stone for example teaches the standard dialect (making it a useless product).

Don’t make the mistake of learning MSA first if you plan to communicate.

Rocket will get you speaking natural Egyptian.

Some of the lessons focus on numbers and individual letters, while the rest move on to basic words and demonstrate how those letters connect together.

While not essential for speaking, reading Arabic script is actually a lot easier than most people think and will simplify your travel to the Middle East as you’ll be able to better read signs and menus.

Plus a lot of quality Arabic books for learning are written solely in Arabic script.

Unlike the other editions like Chinese and Japanese which do an outstanding job of teaching you how to read and write, I feel that the Arabic literacy lessons could be improved with more detailed explanations.

Right now, they consist of very short videos of a teacher’s hand writing the letters and words.

These are accompanied by audio pronunciation and sample words.

I already mentioned our site, TalkInArabic.com.

There’s also another similar site which is primarily for Moroccan Arabic called ArabicPod101.

At present neither of these are linear courses.

But Rocket Arabic is.

As I already intimated, you don’t have to use Rocket as a linear course but for those who prefer to be held by the hand and walked through the course from start to finish, it does just that.

You also have the option to be tested.

So the good thing about Rocket Arabic is that it leaves you with options.

Although the course only provides Level 1 at this time, it’s still a very comprehensive platform that covers a lot of relevant material.

As someone who is fluent in Egyptian Arabic, I can vouch for the quality of the natural recordings (I wrote about how to learn Arabic before).

They’re presented in a fun, slightly humorous way too.

But in the age of Internet subscriptions for everything (both TalkInArabic.com and ArabicPod101 are subscription based), Rocket Arabic is a lifetime, one-payment product (UPDATE: They do now offer a payment plan/subscription-type option as an alternative).

You buy it, you own it for life.

And you can download absolutely everything on the site – audio and lesson notes – for offline use.

This means that unlike a product like Rosetta Stone where you’re restricted by the software, you can use Rocket Arabic however you want (e.g. download all the audio and use it on a portable listening device).

This is another great point about Rocket that’s often overlooked.

Some Rocket Languages forums are active and some aren’t

Unfortunately, Rocket Arabic’s forum is one of the latter.

The whole purpose of the language forums is to foster community and encourage discussion among other learners. It’s also so the native speakers can answer questions.

I just don’t see much activity in the Rocket Arabic forum sadly.

While there are some recent topics, most of them go back many months or even years.

This is something I believe Rocket needs to work on improving.

When it comes to language learning, community makes an enormous difference to one’s outcome (see the italki community for example).

For some people, the forum may be all they have.

If you’ve used Duolingo or Memrise before, you’ll appreciate the gamified features in Rocket Arabic

While not a core feature, this is important for some people.

Gamified motivators which let you “compete” with other learners are a feature you see on sites like Duolingo and Memrise.

Basically, as you complete lessons, you gather points which are indicated on the sidebar of your dashboard, and gradually climb up in rank.

The purpose of this is to help encourage you to have study streaks (so you keep coming back).

It can make a big difference.

Healthy competition and a sense of satisfaction gained by completion is a nice touch that Rocket Arabic has.

I actually prefer the mobile app for Rocket Arabic personally.

It’s included free as part of the subscription you pay for and provides another way to access the same content while on the move.

In my opinion, the app feels smoother and seems to load faster than the browser version at times.

I just like being able to drive or lay in bed and listen to the Arabic lessons.

All the core features from the site work and display perfectly on iOS and Android.

And the fact that it covers Egyptian Arabic rather than Modern Standard puts it light years ahead of competitors like Rosetta Stone.

Rocket Arabic may appear slightly expensive for a digital product but compared to its competitors who restrict access or limit lesson material, it provides value.

The comprehensiveness of the lessons and natural high quality of the Egyptian dialogues outweigh the few negative points I’ve listed above.

Get a free Rocket Arabic trial

Already familiar with Rocket Arabic? What did you think?