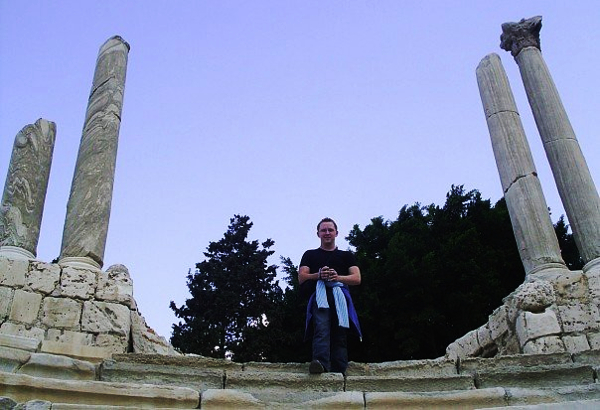 I often hear from readers who are interested in or are learning ancient or dead languages.

The two are not necessarily the same category (though they can be).

Ancient languages refer to those that are centuries or thousands of years old, whereas dead languages could have been living just yesterday (and died out with the last speaker).

For many dead languages there’s also the possibility that recordings still exist so we can still hear what they sounded like.

With ancient languages (generally speaking) this is not the case.

We don’t always know for sure how they sounded. Even if there’s a modern form of an ancient language (e.g. Greek), pronunciation has almost certainly evolved over the centuries.

In the case of a language like ancient Hebrew where vowels weren’t written, true pronunciation of many words is even more uncertain.

So I thought today that I’d offer a few tips that have really helped me over the years when learning ancient languages.

I’ve had the privilege to be able to learn Ancient Hebrew, Koine Greek and Classical Arabic, and they presented various challenges that I haven’t had to face when learning modern languages like Russian and Korean.

But there are some equally applicable strategies that work for both.

The main difference of course is that nobody learns ancient languages to speak. People generally learn them to read old or religious texts for spirituality or just out of interest.

So improving literacy skills is the goal here.

1. Remember that although dead, the language was once as living as yours is now

This is the most important point I’m going to make.

When you’re dealing with a written or ancient language, it’s easy for it to become just a bunch of rules and problem solving on paper.

You quickly forget that people once lived who spoke this in the exact same way that you speak your language today.

It was a real language, full of slang and swear words. People fell in love with it, they sang in it, they joked in it and they taught it to their toddlers.

It was once totally alive.

Now of course, the kind of material you’re reading makes a difference because if it’s a formally written document then it’s not going to reflect ordinary speech in the same way that a legal document today doesn’t sound anything like the way normal people speak.

But if you’re reading an informal/casual piece of writing (even if it’s 2000 years old) then the human side and personality of the writer really shines through the text if you allow it.

You begin to see that this thing was written by an actual person with a sense of humor and other emotions at the time.

The best example of this I’ve seen are the letters of the New Testament in Koine Greek where you get some very colorful slang and emotive language that gives you a good glimpse into what the writers were like as people back then.

So I encourage you to try and get a sense of that while you’re reading ancient texts in the original language – try to visualize the very human writer and the emotions that he or she poured into the text all those years ago.

When it becomes real this way, you’ll find it easier (and much more enjoyable) to learn.

2. Learn according to your strengths

I once wrote that I’m visual-spatial learner.

It was a realization that took me a while to figure out but when it did it changed everything about the way I study languages.

What that means is that I learn languages best when I can visualize them. It’s usually a lot more challenging for me when I only hear something to remember it well but if I can get some kind of visual anchor then it tends to stick really well.

If that’s you then the good thing about learning written languages is that it’s completely visual already.

So words, collocations and phrases become visually familiar to the point where we begin to recognize them in print even before we’ve actually read them (just as in our own languages we don’t spell out every word we see but rather we recognize the length and ‘shape’ of the word and know what it is).

The bigger problem I think is for audio learners.

When you have an ancient language with no accompanying audio or listening material, your key learning strength is neglected.

I’ve seen learners struggle immensely with ancient languages for this reason because they can’t hear it.

That is, say it whatever way helps you remember it.

Voice it and record it.

If you rely on audio, create the audio if it doesn’t exist.

The time spent recording yourself reading words out may seem like a waste but consider that time part of your study as well.

3. Translate into the target language

When you learn to speak a modern language, regular output (speaking) is essential.

Listening on its own won’t make you a better speaker.

Even though ancient languages aren’t spoken by anybody, the production of the language in writing has similar benefits to producing a modern language in conversation.

You learn by doing – not just by passively receiving it.

I used to know Greek professors who would only require students to translate from Greek into English but not the other way round. It was considered a waste of time and students didn’t see the point of translating back into a language that’s no longer spoken by anybody.

But when we finally got a lecturer who decided that we needed to translate into Greek from English, the results spoke for themselves.

Some students dropped out because this was a lot more challenging but for those of us who stayed, we learned it very well.

So I want to encourage you to challenge yourself to do this and you’ll see the difference that it makes.

Translate single words, then two word collocations, then phrases and then whole sentences.

Increase the complexity of the sentences you create as you improve.

4. Learn it in chunks

We learn languages (including our first) in chunks.

It’s an awful sounding word I know but what it means is that when we learn a language, we don’t (or at least shouldn’t) start by memorizing grammar rules first.

We learn whole expressions, phrases, collocations and words through frequent exposure which we then begin to replicate.

In other words, almost everything you say is unoriginal.

So take this sentence for example:

I went to the shop.

I know and use that sentence because I’ve heard it and/or that sentence structure countless times in my life. And not just the whole sentence but the parts of the sentences as well which I’m able to move around and swap words to create other sentence patterns.

With this in mind, I learn modern languages through high repetition of language chunks (similar to the way a toddler does) and this can also be applied to learning ancient languages.

Because ancient languages are written, we naturally assume that we need to memorize all the conjugation tables and vocab first in order to read texts.

However, I want to encourage you instead to focus on whole chunks just as if it were a spoken language.

Take this for example in Koine Greek:

This is a common expression in Koine Greek.

You could learn these words individually and study the grammar in depth as most people do but if you instead focus on learning whole expressions like this as they are, you’ll find that you start to naturally learn the grammar and recognize similar patterns in other places.

So you can see here that ὑμῖν καὶ εἰρήνη is a chunk that you’ve already learned by high repetition of the first expression so when you then see it within another sentence structure like this, you’re able to instantly identify it.

Languages are a framework of blocks that fit together neatly.

Think of it as a kit of parts already mostly assembled rather than raw materials you have to construct from scratch.

Have you learned an ancient or dead language? What helped you?