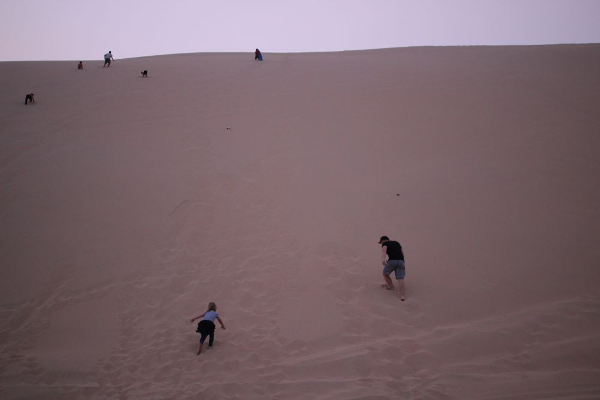 A while ago I mentioned my plan to drastically improve my Moroccan Arabic.

Regular readers of this blog know that my background for the last 12 or so years has been in Egyptian Arabic (and to a lesser extent Levantine and Iraqi).

But Moroccan has always been a challenge of mine.

Spending a lot of time in the Gulf this past year especially, I’ve met a LOT of Moroccans and Tunisians living there for work and interacting with them has taught me heaps about the differences and various strategies for communicating.

Usually this would entail me speaking Egyptian and them replying to me in their dialect or a slightly ‘Egyptianized’ version of their dialect to make it easier.

Therefore I saw a real need to start spending some serious time focusing on Maghrebi Arabic (Moroccan, Algerian and Tunisian mainly) to get it up to a more competent level since a lot of the work I do these days requires me to speak with people from these places.

Honestly I have no desire to speak Moroccan Arabic.

What’s important to me however are my listening comprehension skills – to understand what I hear.

Since Moroccans can generally understand Egyptian Arabic because of the media, my main priority has simply been to make sure that I can understand them when they answer me.

Note: While I usually recommend this resource and this for learning Arabic online, I’ve found that ArabicPod101 is the most comprehensive tool for Moroccan specifically.

The common argument – Moroccan Arabic is like another language!

Ask anybody with even a rudimentary knowledge of Arabic about Moroccan and they’ll tell you it’s like a totally different language.

Even native Arabic speakers from the Middle East and Egypt can seriously struggle to understand a speaker from North West Africa.

This is probably why it’s one of the least desirable dialects to learn since it’s the most geographically limiting variety of Arabic.

Because of this, many argue that it shouldn’t even be classified as a dialect.

The easiest way to understand this argument is to compare it to Portuguese and Spanish which are very similar and yet two completely different languages.

I’m personally undecided as to how I’d classify it.

In this post, I’ll share with you just a few observations I’ve made about Moroccan from the perspective of someone with over a decade learning other dialects (Egyptian, Levantine and Iraqi).

I’m definitely no expert on Moroccan but some of the observations I’ve made here may help you if you’re in a similar situation or considering which dialect to learn.

1. Moroccan pronunciation takes getting used to

When I first sat down to start listening carefully to Moroccan material I was disheartened.

I could recognize a few words and expressions here and there but they were lost in a sea of gibberish that I couldn’t understand. Here and there a French word would jump out at me too but none of this was enough for me to decipher what was being said.

Some of the letters (in particular the strange gutturals!) just didn’t sound familiar either.

But here’s what I started to realize:

Like every dialect variation of Arabic, there are significant vowel shifts that make a very common Arabic word totally unrecognizable at first sound.

As a simple example, take the word for ‘dog’ (كلب).

Across dialects, you’ll hear this pronounced ‘kalb’, ‘kelb’, ‘kilb’ or even ‘keleb’.

It’s the same word though if you look at the consonants – the only difference is that it’s undergone vowel changes over time in different places.

When you hear this spoken in a sentence at normal speed surrounded by other words, it can be very hard to hear if you’re not used to that particular vowel change.

Since Egyptian is my forté, when I meet a Levantine or Iraqi speaker I’ll usually have to make a mental adjustment at first to prepare myself for the many words they’ll use which have slightly different vowel sounds but the same consonants.

This is no different to English either.

They’re the same consonants but the vowel change makes it sound like a very different word to a learner of English.

The issue with Moroccan does get a little more tricky than this though in my opinion.

This is because of the odd consonant clusters you get due to short vowels actually dropping out of words altogether.

So a word like ‘balad’ (بلد) for example which sounds very much the same in most dialects sounds a bit like ‘bled’ in Moroccan. The short vowel in the first syllable essentially disappears which means that in the context of a full sentence it sounds like a very different word.

Personal pronouns like ‘enta’ and ‘enti’ become ‘nta’ and ‘nti’.

You encounter these vowel changes and deletions everywhere in Moroccan Arabic.

So what I’ve found is that consonant clusters caused by dropped short vowels make it very tricky to hear what’s being said the first time round. But when I listen a few times or see it in a transcript I usually (though not always) get an ‘aha!’ moment.

The challenge is training your ears to listen carefully for the familiar consonants.

2. Moroccan Arabic grammar and syntax have basic differences to other dialects but nothing major

Moroccan is quite different to other dialects but it’s still Arabic.

The general structure/syntax and majority of terms are the same and once you get your head around some of the basic differences, you can move ahead easier.

Here are just a few simple realizations that helped me begin to move from Egyptian to Moroccan:

The typical verb conjugations depending on gender, number and person are the same as the other dialects with one notable exception that I’ve seen.

So ‘I write’ is ‘ana niktib’ (unlike other dialects where it’s prefixed with an aleph: ‘ana aktib’).

Of course, this means it’s a little confusing for third person plural (we) which in every other dialect has the same n- prefix.

So it’s the same prefix but it includes a plural suffix as well to differentiate.

The other challenge as mentioned above are the vowel differences with verbs which make them harder to hear and pronounce coming from a different dialect, and the occasional different vocabulary.

This is something I’m still training my ear for.

The present tense prefix is k- rather than b- and this attaches to verbs that conjugate just like the other dialects (e.g. ‘You (m) write’ = ‘nta k-tiktib’.

Future tense is indicated by a prefixed gh- (غ) or as a standalone particle before the verb: ghadi (غادي).

Finally, negation works mostly the same way as in Egyptian where the verb is circumfixed with a negative prefix and suffix (ma+verb+sh(i)).

This works much the same way as the French negation with ne+verb+pas (and probably originated from it).

3. Accepting the Berber, French and Spanish influence in Moroccan Arabic

One thing you’ll hear often about Moroccan Arabic is that it’s heavily influenced by French, Berber and Spanish.

In fact, if you listen to a Moroccan, Algerian or Tunisian speaker you’ll almost certainly hear many French words and phrases, as well as a whole lot of unfamiliar terms and expressions that are not found in (or rarely heard in) other dialects (including antiquated Arabic expressions).

To give you an example, I was just listening to this street interview today and I noticed the woman used a sentence/expression that’s half French and half Arabic:

In this particular instance, I don’t think it’s necessarily codeswitching (where a bilingual person injects words and expressions from their other language).

But rather I think this is an example where French has become such a part of the language and culture that Moroccan Arabic has absorbed it as its own, the same way English has with so many French words and expressions.

Either way, you can hear the French influence clearly.

Spanish has had a big impact on Moroccan Arabic too.

This is because of its proximity to Spain and the Moorish occupation of Portugal and Spain for so long.

My Spanish is awful admittedly but two examples I know of are the word for kitchen (cocina in Spanish and kuzina (كوزينة) in Moroccan), and week which is usbu3 (اسبع) in Arabic but semana (سيمانا) in Moroccan.

Egyptian and Levantine are also quite heavily influenced by European languages but I’d say that anyone with a background in French or Spanish might find it an easier transition moving into Moroccan first.

I also know very little about the Berber languages but I do know that Moroccan Arabic is littered with borrowings from Berber.

The most well-known of these is the word for ‘how much’ – in every other Arabic dialect it’s kam (كم) whereas in Moroccan Arabic/Berber it’s sha7al (شحال).

This is similar pattern to the Arabic expression ‘3andak kam sena?’ (lit. you have how many years?).

You’ll also find a lot of unique terms to North West Africa such as wakha (واخا) for ‘OK’, daaba (دابا) for ‘now’ and jooj for the number 2.

At the end of the day, I suggest not being put off by the different vocabulary and borrowings but just learn them gradually as you come across them.

Of course, French and Spanish might give you a leg up but they may also be detrimental since you’ll be tempted to use them with Moroccans when you get stuck.

For Moroccan Arabic, I recommend ArabicPod101 (video and podcast lessons that are mostly focused on the Moroccan dialect).

We’re currently working with some Moroccans to expand our content for that dialect at TalkInArabic.com as well.

For a good book, Abdellah Chekayri’s Introduction to Moroccan Arabic and Culture is the best I’ve seen personally.

Are you experienced with Moroccan Arabic? What would you recommend?