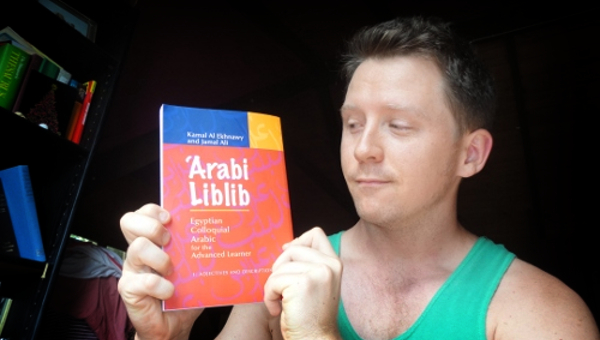 Can you recommend a good book that has helped you understand the finer details of colloquialisms (including bad words) in Arabic?

From time to time I put up reviews and recommendations of Arabic books (see here and here) and tools that I use or have used which I think might be of some help to you.

Today I’m going to briefly share another one that I’ve just bought.

The comment section is always open to your input so if you have any recommendations of your own feel free to share it with everyone!

UPDATE: See the list of my best Arabic resources here.

It’s one of a three part series (see 2nd and 3rd parts) on adjectives, idiomatic expressions and proverbs used in everyday colloquial speech in Egypt.

“The goal of this book is to help advanced students of Egyptian Colloquial Arabic to achieve a near-native level of proficiency through a focus on adjectives and expressions used to describe people.”

The title of the book is a colloquialism itself – ‘Arabi Liblib’ (Fluent Arabic).

A lib is a seed (usually refers to a pumpkin seed), and the reason why it’s used to refer to fluency is because of the way you use your mouth/lips to open and chew the seeds (you usually have bits of seed shell on your lips).

It’s a metaphor implying that words are all over your lips like seed shells.

Here are three random example entries from the book:

When you’re watching a film in any language or walking the streets in any country you come across terms like this all the time (this is generally true anywhere you go on the planet). They’re terms that conventional textbooks will never teach you.

They may seem rude or inappropriate to some people but the fact remains that until you get a handle on common language like this you’ll never fully grasp the language.

One of the things I like about this book is that descriptions of the words are written in Colloquial Egyptian and not English.

At first I wondered why they did this and didn’t just provide an English translation, but now I appreciate that when you read an explanation in colloquial speech it actually feels like a native person is explaining the word to you.

This makes a huge difference believe me!

UPDATE: Since writing this review, several other advanced textbooks have come out of AUC that also teach this way. See my review here.

Here’s an example of the explanations in colloquial dialect:

This book has and will continue to be a huge help to me as it really clarifies a lot of things that I hear a lot when watching movies or travelling but can never find a definition or adequate explanation for.

If you’re learning Arabic and want to learn more about the ‘Arabi Liblib series you can get it here.

I plan to put together some tutorial videos soon on how I use tools like this effectively along with media to teach myself ‘street slang’ without necessarily travelling or needing to be in an immersion context.

Our new resource for colloquial Arabic dialects – all naturally spoken

This is an updated appendage to the original ‘Arabi Liblib review.

I just want to let you know that not too long ago, we released a massive online resource for spoken Arabic that covers 8 spoken varieties including Egyptian.

It’s been a huge undertaking putting it together but in a short time, we’ve had literally thousands of people join our community and improve their spoken Arabic.

The resource is called TalkInArabic.com.

Make sure to a have a look and let us know what you think!

Do you know of another Arabic books like ‘Arabi Liblib?