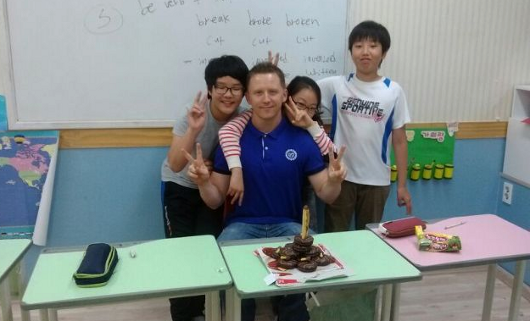 It was my birthday yesterday and some of my favourite Korean students made me a cake out of chocolate cookies. 🙂

They spent all their pocket money to buy the ingredients!

Today I’d like to get your opinion on something that I think might generate a bit of healthy discussion (I’m sure everyone will have different thoughts on this).

Would you prefer to reach a strong level in just one or a few languages, or would you rather be able to speak many of them at low levels?

And yeah, this is pretty much an either/or question.

The reason why I’m asking is that there are a lot of people who really want to speak as many languages as possible and I’ve received a few emails from people saying that simply being a polyglot is their ambition.

Rather than saying I want to speak language X for a genuine need or specific interest, people seem to be chasing the romanticised idea of being able to speak a lot of languages.

Even though most of the people on our planet are by definition polyglots (those who speak only one language are a minority group in the world), people from predominantly monolingual countries are still amazed by polyglots (multilingual people) as if it’s something remarkable (hence why the media creates sensationalized stories over YouTubers who record themselves speaking many languages).

In fact, the word polyglot gets thrown around so much these days that I now avoid using the term altogether like other words that get over or misused.

Being a language enthusiast is great (I’m definitely one of them) but the issues I have with the fad of pursuing “polyglottism” are these:

I started writing here nearly 2 years ago because of my love for foreign and endangered languages (I’ve invested countless hours here and 10’s of thousands of my own dollars in fact), and all I want to do is share my passion as well as learn from all of you.

What I’ve always done however is intentionally keep myself at arm’s length from what I consider to be circus polyglots who are more interested in popularity and virality than the languages and cultures themselves.

My opinion: specializing yields great rewards in the long run

Plenty of people can strum a few chords on a guitar but it’s the bloke who can improvise a beautiful piece of unrehearsed music who really knows his instrument.

It’s great to be able to barter and flirt your way around a continent with a few A-level languages under your belt but eventually it loses its thrill.

When you set yourself up mid to long-term in one foreign place and go through lots of hard struggles, gradually learning how to communicate to the point where both parties really understand and connect with each other (past the nods and smiles :)), that’s when your eyes really begin to open to a new culture.

I’m talking about making a connection with people that goes way beyond the superficialities of the circus polyglot.

For me personally, whether it’s languages or any other skill, I like to see each endeavour through to the very end.

Perhaps it’s the perfectionist in me that doesn’t like the feeling of having lots of unfinished projects! 🙂

Now of course everybody’s different (I’ve just shared my opinion) and I’m sure there are plenty of people who just love to backpack and move around, and being a jack-of-all-languages suits their lifestyle.