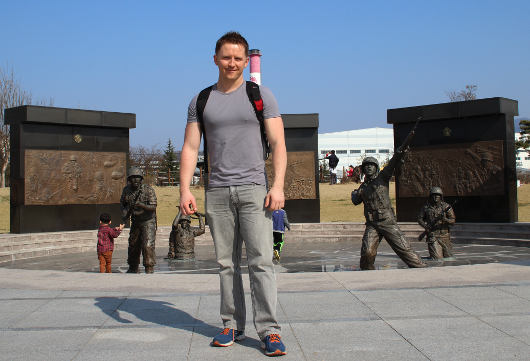 Rest assured that while the media’s causing hysteria over North Korea at the moment, people here in South Korea don’t seem to be worried at all. 🙂

First of all, sorry for the lack of frequent updates lately.

Working full-time here in Korea has given me lots of fantastic exposure to the language and helped me make good, native speaker friends but it’s also been demanding enough to mean that I’ve had to carefully ration the free time that I get.

My language and fitness targets have been my absolute priority this year, and since the weather’s warmer now I’ve been intentionally spending less time at home and more time out speaking with the Korean locals every chance I get.

I’ve reached the 6 month mark with the Korean language and I’m definitely at a clear intermediate level now which means that spontaneous, fruitful encounters and new friendships have started to become a real regular occurrence, opening up lots of new doors that I previously didn’t have.

My experience with Koreans (particularly in the smaller town that I live in) has shown me that many people here tend to be quite shy about talking to foreigners which I think has a lot to do with them lacking confidence in their own English skills more than anything else. It’s also true that approaching strangers for friendship is rare in Korean culture.

Some East Asian countries can be a tough nut to crack in terms of meeting new people without introduction but it’s definitely doable and very rewarding in the end.

This has been challenging but being the stubborn social risk-taker that I am, it’s a hurdle that I haven’t backed down from. 🙂

I’m also well aware that it’s been 3 months since I uploaded a progress video so I’ll do that and put some recorded chats with friends on my YouTube channel as well for anyone curious in tracking where I’m at.

The more you comprehend, the more your chances are of learning passively.

Elementary learners often experience the frustration of being around native speakers having a conversation and only being able to pick out a couple of words here and there.

Most of what they hear is meaningless babble.

You simply cannot learn from incomprehensible noise and this is why passive listening as a beginner is pointless. Even though it’s good to get familiar with the sounds of the language, it’s not an effective use of your time.

But what I’ve noticed time and time again – especially this time with Korean – is that when you reach an intermediate level, you really do begin to notice the details of everything that’s going on around you.

Every time you’re in a conversation or within earshot of one at this level, you continually spot patterns, words and expressions that you previously couldn’t notice.

Although this requires you to have good attention to detail, a lot of it also happens effortlessly and unintentionally.

Comprehensible input, whether through reading or listening, is key to learning quickly and effectively, and as an intermediate learner begins to understand much larger amounts of what’s going on around him or her, the input that was previously useless suddenly gains new value.

Stuff that was totally alien a short while ago becomes meaningful – almost as if it happens overnight.

I think of it as a snowball that’s picking up speed and getting larger the further along it gets.

In the last few weeks, my Korean friends have remarked on what they say is a sharp, rapid improvement in my own level which I put down to the growing momentum of this learning snowball – pushed by driving perfectionism.

The good and ugly kinds of perfectionism

There are two kinds of perfectionists.

On the one hand, you have the know-it-all, (usually) socially inept types who lambast anyone or anything that dares to step outside the box and challenge the norm.

These are the kinds of vocal grammar nazis you find who just can’t stomach someone else’s unconventional ideas or success.

The people who have this kind of attitude study for ages waiting for the non-existent perfection day to arrive when they’ll finally be ready to start communicating. They’re the kind of people who are hesitant to practice openly out of fear of making mistakes and losing face.

It’s a crippling, negative attitude to have.

On the other hand, you have the kind of perfectionism that drives an individual to succeed and to never be satisfied with they’re at.

I alluded to it here while talking about fossilization:

The key here is to let perfectionism drive you to be on a daily mission to improve – even with the most rudimentary things.

I’m constantly keeping my ears open to listen to the way native speakers greet each other, the way they ask simple questions, the slang/colloquial expressions they may use in place of standard expressions, accent variations and so on.

I think to myself, “I know how to say X but I’m sure there’s a better, more natural way to say it” so I seek it out, letting that perfectionist ambition drive me to get it right.

As long as you don’t allow perfectionism to stall your progress through fear of making mistakes then it’s a powerful thing to be driven by.