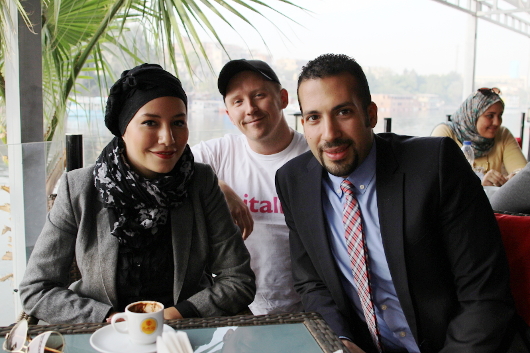 I hope you’re enjoying the holiday period wherever you are in the world. 🙂

I’m currently back home in Australia for a short break before I head back to the Mid East to continue working on TalkInArabic.com.

Our small team will be heading to a region that I’ve never had the chance to visit before so I’m very excited about what the new year has in store!

Today I wanted to share 5 things that are absolutely crucial in helping you achieve your resolutions for the new year.

Follow these and make this your year of accomplishment.

1. Wake up to the reality that you’re going to die and it could be tomorrow

You and the people dearest to you will all die.

That’s pretty heavy when you stop and think about it for a moment. It’s totally unavoidable and a reality that every single person has to face at some point.

And the worst part about it?

It could be at any moment.

You might have 70 years left on the clock or 7 years. Could be 7 hours or 7 minutes.

The last thing I want is to get to the end of my life and think about all the quality time I spent sitting here talking about things that I plan to do but never quite got around to.

Or stuff that I was too afraid to at least try my best.

When you put life into this kind of perspective it creates a powerful sense of urgency. You’ll push yourself to constantly achieve because you know the clock is always ticking and life is so unpredictable.

Whenever a day goes by that’s one less day that you have.

2. If you have a new year’s resolution, start in December before it even begins

December is not the time just to think about what you’re going to get done next year.

We think a year is a long time but before we know it it’s October, then November and then Christmas again.

It’s easy to think of the end of the new year as being far off. We trick ourselves into believing that the year ahead is long and that there’s plenty of time to accomplish all that we want to do.

If your new year’s resolution is to travel somewhere, reserve or buy the tickets right now. Close this page now, open up a site like Skyscanner, Hipmunk or Expedia and book the tickets.

It’s done. You’re going. Now you’ve got between now and then to work out the rest.

You can take the same approach to just about anything else you plan to make part of your new year’s resolution.

3. Stop saying ‘let me just get over this hurdle…’ – if you’re saying this then it’s never going to happen.

The grass is never greener on the other side.

In terms of age the grass only gets browner every year! 🙂

I know a few people who have been talking about quitting smoking in the new year. “Oh, I’ll just get over this hurdle at work first.”

They’ve been saying the same thing every single December for the last 8 years.

Whichever analogy you use whether it’s hurdles, mountains or whatever, life is full of them and as soon as you conquer one you’re staring at another five.

Waiting until conditions are just right before trying is foolishness. You’ll be waiting forever.

You’ve got the resolve. Do it now.

4. There are 12 months in a year. Make a resolution for each of those 12 months of the year.

Or make each month a step toward a massive end of year goal.

So for example if quitting smoking is your new year’s resolution and going cold turkey is impossible for you, set a very achievable goal at the end of each month where you cut down or introduce new, healthy habits gradually instead.

If your goal is to learn to speak French, you could set yourself very measurable, achievable goals each month that lead up to an end of year trip to France.

This coming new year for me personally will be a massively hectic year full of travel between 4 continents so I’m managing my own resolutions to get these things done by setting monthly goals the very same way.

The important thing is that you can look at each month of the year and be proud of yourself for moving forward.

When we talk about new year’s resolutions the reality is that not all of it can be achieved.

We’d love to be able to do it all and even though we may be serious about getting it done, it just might not be doable for reasons beyond our control.

So separate the ‘will do’s’ from the ‘hope to’s’ right now.

The ‘will do’s’ are things that you can absolutely accomplish and have no excuse for failing.

The ‘hope to’s’ are things that you can at least work toward but not feel totally bad over if they don’t get done.

Once you have them separated like this, you’ll be even more serious about getting the ‘will do’s’ done because you’re honest with yourself that there isn’t a valid excuse for failure.

Here are my personal new year’s will do’s:

1. Due to the fairly sudden rapid growth of my pet project TalkInArabic.com, I’ve partnered up with an Egyptian friend of mine (see the picture above) to help speed up producing content for all the different dialects on the site.

We’re visiting other parts of the Middle East and North Africa to work with different Arabic speakers and work on video and a new podcast series for learners among other things.

This is my number one ‘will do’ for the year.

2. I will spend more time at home visiting family and enjoying my own country which I miss terribly.

Believe it or not, spending whole years at a time gallivanting around the globe takes its toll in many ways. This year I’ll spend more of my time visiting home.

This is an important personal goal of mine and something I’ll mention a bit more soon (I’ll share some tips and advice with you on how to learn dead/ancient/written languages effectively).

It’s one of the few parts of the world I’ve never visited but I’ll be finally heading there (west coast) sometime in the summer. If any of you live around the San Fran area I’ll shout you a coffee. 🙂

I hope to spend time in the new year actively improving Irish, Korean and Russian.

2. Start a new language in the second half of the year.

I usually like to get stuck into a new language at the beginning of each year but since the coming year is so hectic for me I have to break tradition this time and start later (I hope to).

Although I will be spending time learning other Arabic dialects so that kinda counts. 😉

I hope to get back into the books for a while but we’ll see.

So you see that by separating these things I’m being honest with myself about what I’m dead-set on accomplishing in the new year and the things that are less prioritized for now.

What are your own ‘will do’s’?

Achieve them in the new year by applying the advice above.

1. Create a sense of urgency. Life isn’t getting any longer.

3. Stop waiting for ideal conditions before you get started. The grass is never greener.

5. Be honest with yourself and separate the ‘hope to’s’ from the ‘will do’s’.