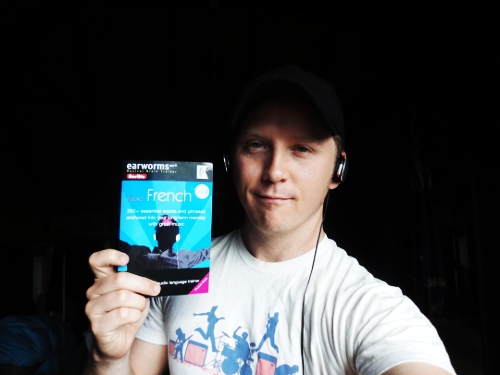 I recently grabbed myself a copy of Earworms – Musical Brain Trainer (from Berlitz) to help reactive my French and to try out its unique method for language memorization.

Every now and then I like to buy myself various seemingly innovative language products so I can give them a test drive and see if they live up to their claims.

Most of them don’t, but I have to say that the Earworms series has impressed me.

Earworms MBT is available in loads of different languages at various levels, only costs a couple of bucks and is instantly downloadable.

If you’d like to head straight over and see what they’ve got you can do that here.

The science behind Earworms MBT

I’m sure we’ve all had moments where we’ve had some seriously annoying (or seriously good) song stuck in our heads after hearing it on the radio or TV.

What this basically means is this part of the brain is actually capable of producing virtual sounds (e.g. generating voices in our head or our own inner voice, watching lips moving and hearing what’s being said in our own minds, etc.).

When we’ve got a song stuck in our heads it’s actually the Auditory Cortex putting the song on virtual replay, even if it’s a new song that we’ve heard for the first time.

There’s a good article by Beaman & Williams here on “stuck song syndrome” if you want to read a bit more about it.

The folks over at Earworms MBT decided to tap into this and see if they could exploit that part of the brain for language memorization:

How Earworms MBT Is Presented

The CD’s have a series of catchy music tracks with dialogue between a learner and native speaker over the top of the music.

The native speaker teaches the language to the learner and they respond back and forth to the beat of the music, with occasional rhythmic repetition of certain phrases. It is not sung, however. They speak naturally.

For those of you who teach ESL, it’s almost comparable to a jazz chant.

They align themselves with Michael Lewis’ Lexical Approach, starting with phrasal chunks (e.g. “I’m going to take you”) and then they break it down (“I’m going”, “to take you”).

I’ve talked about the importance of chunking before. The British Council also has a good page for more info on Lewis’ approach here.

What level is Earworms MBT aimed at?

Each language comes with two volumes:

Volume 1 is aimed at survival basics. If you’re a complete beginner and just want something to help you get acquainted with the new language then this would benefit you.

Volume 2 is somewhere between Upper-Elementary and Low-Intermediate. It still contains a lot of basic language but some of the grammar and vocab it presents puts it at a slightly higher level in my opinion.

I’m using volume 2 for my French which is fairly good for where I’m at right now.

I’ve had a listen to the samples of the other languages on the Earworms MBT website and they all seem to be of equal, good quality. The Arabic one is excellent for low-level learners too in my opinion (MSA).

There are two problems with this series:

The chunking + stuck-song approach has enormous potential for higher level learning using more useful, everyday phrases so I hope that Berlitz expands on it in future.

EDIT: Since writing this review, higher level volumes have now been released! Click here to check it out 🙂

Create your own earworms tracks

I thought I’d experiment a little and have a bit of fun with the idea.

Here’s a tiny segment that I’ve cropped from An Ghaeilge Bheo (an incredible book for Irish that I picked up this week) and put to a catchy music tune (La Noyee by Yann Tiersen [from the movie Amelie]).

I’ve put the original segment and the version I edited myself here so you can see what I’ve done. It’s a sloppy job because I put it together quickly for this post, but you can see how potentially effective it is in getting you to memorize chunks.

You could also record your own voice doing this rather than use another recording:

I used Audacity (a free, open source audio app) to do this and it’s very easy to do.

If you want some instructions on how to do it let me know in the comments section below and I’ll write a post detailing it.

As for Earworms Musical Brain Trainer, if you want to get yourself a copy in the language you’re learning, you can buy directly from their website here.