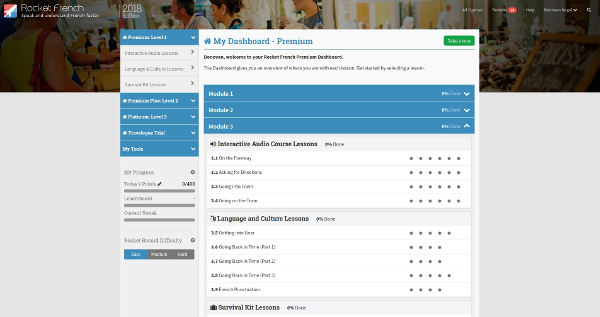 Today I’m going to share my Rocket French review with you (one of the popular editions of the Rocket Languages series).

When I first sampled Rocket French (and before that Rocket Arabic), I admit that I didn’t have high expectations of the program but I was actually seriously impressed at the high quality of its audio content and dialogues.

In fact it’s one of the most comprehensive sites I’ve ever seen for natural dialogue material.

Grammar is demonstrated rather than just being explained and instead of just being a tedious literacy-based program, it really focuses on getting you to speak and listen to French better.

Rocket French uses what’s called a ‘chunking approach’ which means that they break everything down into small pieces or segments so they can be easily absorbed and remembered. This is an approach I advocate a lot in my own writing on this site.

There are 3 different pricing tiers – Premium, Combo and Works. While the Premium tier offers a lot of great content, the higher tiers offer loads more (with a significant price difference however).

To get specifics on these tiers, click on one of the languages above to see what they offer (personally I think the middle option – Combo – is more than adequate for most people).

Below I’ve listed the reasons why I think Rocket French is worth it and I’ve followed it up with a few negative points.

But first a video demonstration (this is a couple of years old now — it’s since been improved even more in the 2020 edition):

The quality and comprehensiveness of Rocket French’s audio is outstanding

The quality and comprehensiveness of its audio is what sets Rocket French apart from most other French products.

In preparing for this Rocket French review, I was seriously impressed by the high quality and scope of its audio and dialogues. By comparison, it’s miles ahead of products like Rosetta Stone (see my review here) and Babbel (review).

You’ll find naturally spoken French phrases and dialogues just as they’re used in real life by French native speakers – something that’s hard to find in many other French resources.

In Rocket French there’s a unique and wide variety of topics ranging from absolute beginner level to advanced and they cover areas such sport, literature, France-specific topics, relationships and more.

The best part is everything is accompanied by 100% natural audio to improve your listening comprehension skills.

There are two sections – ‘Language and Culture’ and ‘Interactive Audio’.

The Language and Culture section is the part where you’ll find grammar and detailed information on culture.

Unlike other programs like Rosetta Stone, Babbel and Pimsleur (see this review), Rocket presents its content in a humorous and unique way that doesn’t follow a ‘cookie cutter’ approach (all language versions are unique to France and French culture). The presenters in the audio comment on and engage with the material which makes it fun and interesting to follow.

Due to the comprehensiveness and high quality of the audio alone, I believe the price for Rocket French is absolutely justifiable.

Compared to its competitors and other French products, Rocket French’s audio content is outstanding value to serious French learners.

When you sign up for Rocket French you’ll find that there’s a helpful community of people to help you with your French.

There’s also a general forum for other languages.

Being able to engage with other French learners is a really great feature to help both you and for you to be able to help others.

If there are questions about grammar, vocabulary or anything else French-related that isn’t covered by the Rocket content then you may find the answers here.

It seems as though the forums are also actively moderated by native French speakers.

Rocket recently released a fresh, new design as part of their more recent edition rollouts which I’ve been really getting into.

The desktop version was previously very outdated (in fact, I raised this negative point in my earlier Rocket French review).

The latest edition of the mobile app is incredibly simple, clean and easy to use.

I actually prefer it to the desktop version since it removes a lot of the clutter and unnecessary features, making it easier to access the French audio directly.

If you have a mobile device then you’ll love the Rocket app as you can squeeze in some study time while you’re out and about (on commutes to work, university, etc.).

While the Rocket languages app gives you access to all the languages they have, it’s worth pointing out that the app is lighter in features.

As I said above, I actually prefer it because it has a simpler, cleaner interface and gives you exactly what you need to study French.

Whatever aspects of the site may be missing from the app version, they’re not part of the core product.

Learn more on Google Play or the Apple Store.

This isn’t necessarily a unique feature to have but like other software (e.g. Babbel), Rocket Languages provides these tools to keep you motivated.

They also keep you challenged.

This encourages you to have ‘study streaks’ (unbroken study over a long period) which will prevent you from losing motivation to study or giving up entirely. I can’t emphasize enough just how important this feature is.

There’s also another feature which works brilliantly called a ‘phrase finder’ which scans through the entire French course when you search for something and brings back every example of the word or phrase in their database. 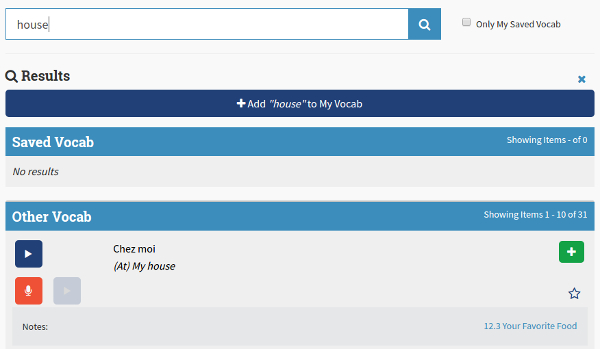 Since Rocket French is so comprehensive, it’s great that they’ve included a search tool that works so well.

This is one of the best points about Rocket French.

Unlike other programs and websites which restrict you to using their material inside the application or on the website, you can download all of the Rocket French content as MP3’s and PDF files.

This means you can easily put the dialogue material on portable listening devices (e.g. phone, tablet or iPod) and take it with you as well as being able to read the lesson PDF on your device.

I always say that if you pay for something, you should be able to access wherever and whenever you want.

Rocket Languages is one of the few resources that makes this possible (though it’s also a feature of FrenchPod101).

Rocket French is fantastic but there are some features and general issues that need improving:

They also have an additional French Travelogue addon which is designed for people planning a quick trip to France or a French-speaking country.

Each level is individually valued at $149.95 but there is a default coupon applied that usually brings it down $50.

For the complete package (all three levels combined), which is typically valued at $449.85, there’s a whopping reduction in price of $189.95. This makes it pretty much a no-brainer if you’re trying to find the Best Value option for Rocket French.

UPDATE: I’m running a unique, exclusive offer on Rocket French that’s only available to my email subscribers. I don’t share it publicly. Subscribe below and choose ‘French’ for more info.

Rocket used to offer the physical CD option for people not wanting an online course but I’m not sure if that’s still offered (let me know in the comment section if it is).

Like most online subscriptions for language courses, Rocket offers a no-risk trial period on their courses.

This is a 60 day satisfaction period and from what I’ve heard, they’re pretty good at responding quickly to people’s concerns and requests.

If you’re looking around for alternatives before making a final decision on Rocket French, there are some good ones to consider.

I’ve listed my personal favorites on my French resources page.

Ultimately, it depends on your own individual needs and learning style as to what kind of French course or program you sign up for. I could recommend a few to you but they might not suit you.

It’s quite different to Rocket French (less organized and more of a podcast than a course).

Glossika French is incredible but some people get frustrated by its unique method and style.

There’s also French Uncovered which is comprehensive but much more of a ‘hand holding’ for people with no background in French.

Personally, I would avoid well-marketed apps like Babbel and Duolingo.

Rocket French review summary: The great quality and comprehensiveness of its audio makes it worth the investment for a serious learner

Other sites and books lose their usefulness pretty quickly.

Rocket French is a little pricey compared to some other products but trust me – you will get years of use out of it.

I’d happily recommend it because of the comprehensiveness of its content and excellent quality of its dialogues.

Some of the other features I’ve mentioned need improvement (or removal) but the natural audio is where Rocket shines.

You can try it out (they do offer a free trial on their products) here:

Please share your thoughts below if you’ve used the course (or any other Rocket edition) below.