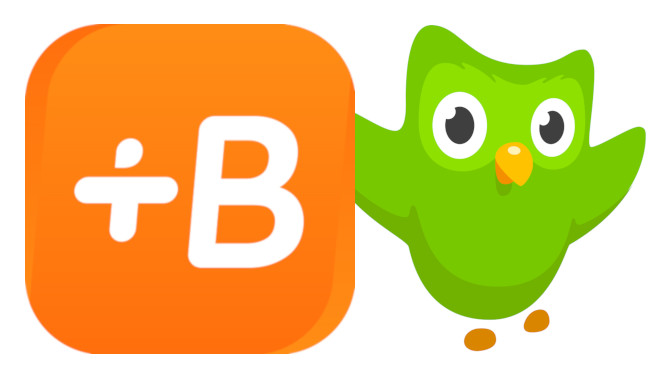 Babbel and Duolingo are two of the most popular and well-known platforms for language learning.

Duolingo’s popularity stems primarily from the fact that it’s a “free” service, whereas Babbel is known by its viral marketing campaigns and TV ads.

I’m sure you’ve seen that bearded hipster who’s in pretty much every Babbel commercial.

I’ll get into the main similarities and differences in detail in just a moment.

But let me just start out by saying that I’m usually not a fan of writing these kinds of comparisons (see my Rosetta Stone vs Duolingo review for example). It’s often like comparing apples and oranges when you take two different platforms with different missions and try to draw comparisons.

I’ll do it anyway today since people ask.

Here’s the email I received from Duolingo for clarification:

I work for Duolingo and wanted to reach out regarding your review of us vs. Babbel. Specifically, there is one factual error in the article that I’d like to clarify, which relates to our business model and the crowdsourcing of translations. While we did this early on, we stopped crowdsourcing translations a few years ago and have instead focused on monetizing through ads and our Duolingo Plus subscription option, which is our biggest source of revenue.

If you are able to clarify this for your readers, I would greatly appreciate it.

I’ll update these points at a later date when I have time.

To summarize the main differences:

Personally, I don’t get much value out of either Duolingo or Babbel and wouldn’t personally rely on them to learn a language.

There are much higher quality language learning resources in my opinion.

Duolingo – nothing is ever free!

So I assume that the main reason why you’re comparing Duolingo with Babbel is that one is “free” and the other is not.

Babbel has a recurring charge. Duolingo costs nothing.

It makes perfect sense why people would prefer to use a seemingly free product over a paid one (even though Babbel is inexpensive).

But one thing I’ve been pointing out lately is that Duolingo is not free.

Every time you go on their platform to learn a language and fill out exercises (fill-in-the-blanks) and so on, those answers you give are actually passed on and sold to major corporations.

You don’t even realize it but you are translating content that gets sold on.

The man who invented Duolingo, Luis Von Ahn, is the same guy who created the CAPTCHA login quizzes.

It’s a genius concept to be fair – they show you some images and ask you to identify something in the images or write the text you see in an image, and then your answer is used to authenticate you.

It’s also sold to a company that wants your answer for whatever purpose that may be.

You get a service (language learning) and in exchange for your answers that are provided to companies, Duolingo is paid a lot of money.

So really, Duolingo is just a front for crowd-sourced translation.

Most people wouldn’t have a problem with this model.

Some people might see it as a fair exchange (a service for a service).

But I have ethical concerns over it – I don’t want anything of mine given away to people when I can’t see the details or have any control over it. I feel the same way about companies like Google and Facebook who profit off your data and the information you freely provide to them.

UPDATE: I have read some unconfirmed reports online that suggest Duolingo moved away from this model and in place of paid subscriptions for their premium service.

I’m not sure if this is accurate or what the details are at this stage.

Duolingo’s UI is a child’s toy – by design

I’ve written extensively about the very clear trend of infantilization in UI.

Take a look at the UI (design) of the Duolingo website and app – it’s a children’s toy. It’s incredibly babyish and appeals to limited attention spans.

This is a general trend we’re seeing across the board with design.

Babbel doesn’t follow the trend of UI infantilization quite as much – they look a lot more professional and ‘adultish’.

You might think this is an odd argument to make but the dumbing down of interactive learning for adults is concerning.


The issue I have with Babbel is that it is a very mediocre platform (not bad, not great).

See my Babbel review if you haven’t already where I explain this in great detail.

But it’s becoming more and more of a household name because of the advertising it runs – it’s literally everywhere.

I see it all over Google and social media (relevant ads because I research language content so much) and all over TV.

In fact, my wife who knows very little about language learning trends came up to me recently and asked me:

“Hey, have you used this Babbel app?”

She’s seen it on TV so much that it stuck with her!

But here’s the thing:

Babbel is not becoming well-known because it’s a great platform.

I usually judge a language resource based on this question – has this product achieved recognition based on its own merit?

Is it unique enough that it stands out and gets organic reach?

Or is it just really good at ad campaigns?

I made a very similar point about Michel Thomas not too long ago – it’s a terrible product that had the advantage of Hollywood celebrity endorsements which catapulted it to fame.

It’s not that Babbel’s a bad app.

Personally, I prefer neither but Babbel is clearly better than Duolingo

Duolingo and Babbel have some similarities in style but are utterly different overall.

Duolingo has an army of volunteers and devotees who build it for free. It’s not really free though.

When a product is free, it usually means you are the product.


The language coverage of Duolingo is impressive however and the gamified aspects are clever and fun (provided you don’t spend too much time on it).

Babbel has less languages but does them better than Duolingo.

You can tell that Babbel has actually put effort into hiring language experts to craft proper lessons.

The problem is, the platform is bland and feels uninspiring.

I just don’t get much value out of either Duolingo or Babbel and would get further booking a few cheap sessions on italki. If I had to choose one, it’d be Babbel though, because it’s designed by professionals and doesn’t farm my translations to sell to corporations.

There are also plenty of better language resources that I’ve shared before.

What are your thoughts on Duolingo and Babbel?