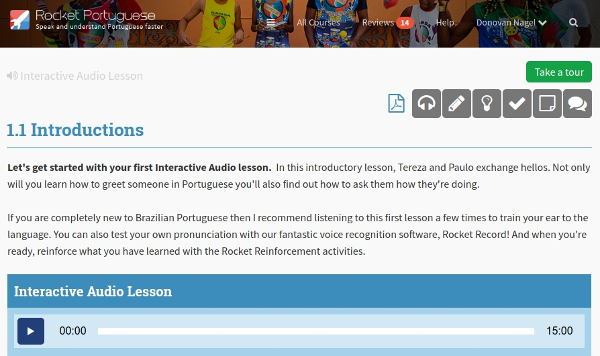 Today I’m going to review the Rocket Portuguese course and offer you my honest feedback on its value and effectiveness.

I’m sure you’ve already heard of the course.

It’s one of the many editions of the popular Rocket Languages series and has been around for about 15 years now making it one of the oldest online courses on the market.

The program implements a ‘chunking approach’ which means that instead of focusing on heavy grammar instruction and getting you to memorize rules, they focus on the practical side of the language and how to use it.

Unlike most of the other editions (e.g. Spanish and French), Rocket Portuguese contains Level 1 only which is important to note.

This means that it’s probably not going to be overly useful for Intermediate or Advanced-level learners.

If you’re a beginner however, then you’ll find Rocket Portuguese offers a substantial amount of material despite only offering Level 1.

Read on and I’ll dive right into it for you.

Firstly, here’s a quick video demo that I put together showing some of the other language editions (this is from an earlier version interface which has significantly improved in the latest 2020 edition):

What alternatives to Rocket Portuguese are available online?

Portuguese unfortunately suffers from a lack of resources compared to languages like French and Spanish (where there’s an over-abundance).

Rocket Portuguese is without doubt a unique, one-of-a-kind resource.

I just want to highlight a few other excellent (and in my opinion, indispensable) resources for learning Portuguese that would make good supplements to Rocket:

PortuguesePod101 uses video and audio podcasts to teach the language.

It’s a lot more disorganized than the structured Rocket course is but there is some great content on there and it occasionally gets updated with new material.

Glossika is one of my all-time favorite resources, it’s very unique and highly suitable for all levels (including Int – Adv level). It’s a spaced repetition learning system that I found exceptionally good when learning other languages.

And of course italki is a site that connects you with conversation partners and teachers worldwide (including loads of Portuguese speakers).

It’s extremely cheap too (some teachers are just a couple of bucks per hour).

These few resources here are my go-to resources and would be adequate for most Portuguese learners.

One of the most important things I always say about Rocket Languages is that the audio quality is outstanding.

Rocket Portuguese is no exception.

The dialogue quality in both scope and quality are very good and you’ll find that the Portuguese material is presented in a way that’s true to the way native Portuguese speakers talk in real life scenarios.

Ranging from brand new beginner right up to higher levels, Rocket Portuguese covers a range of useful and interesting topics.

And all accompanied by high quality, natural audio.

The Language and Culture section is for the grammar and detailed information about Brazilian culture (very scenario-specific language).

The Survival Kit is (in my opinion) the best starting point of the course as it goes over the essential survival terms and expressions in Portuguese — very useful if you’re traveling to Brazil or Portugal.

This means that unlike a lot of other big name courses which basically create the same course and then translate it into different languages, Rocket Portuguese is uniquely designed for Brazilian Portuguese.

The audio lessons are present in a fun and interactive way.

I don’t feel that the presenters are paid translators but rather passionate Portuguese teachers.

Which could be a big deal for some learners.

While it’s clear that Rocket Portuguese has a many thousands of members, I often criticize the almost dead community.

I’m talking about the forum that you can find under My Tools.

If you look at the thriving and active communities on sites like italki for example, you see constant interaction with teachers and students alike helping and supporting each other.

This is vitally important for many learners.

But I also should acknowledge that for a lot of people, they don’t care about this element.

Some people genuinely just want to study Portuguese on their own at their pace and I get that.

This may be especially true for the Rocket Portuguese forum.

The entire platform is available both on the web and as an app.

If you use a mobile or tablet device often (who doesn’t) then I highly recommend downloading the free app for Rocket Portuguese.

Even though the desktop interface has improved a lot recently, I’m even more impressed by the simplicity and value in the mobile app.

You get all the same Portuguese lesson content and all the features work the same (including voice recognition) – but all on a sleek, minimalist app that you can take anywhere.

I actually think it runs faster too.

It’s a free download from the iTunes and Google Play stores.

I highly recommend it for anyone who commutes or if you prefer to lay in bed or on the couch while studying Portuguese.

So the forum was one tool that I found lacking.

But three other tools are worth mentioning: My Vocab, My Progress and My Flashcards.

The My Progress tool is comprised of a leaderboard and study streak companion which is focused on helping to keep you motivated to study.

It’s a gamified motivator to keep you coming back for more Portuguese. You may have seen it already in other programs like Duolingo – it has a competitive aspect.

The My Vocab tool is my favorite.

It’s basically just a contextual dictionary that allows you to search for any word or phrase within the entire course.

If you search for “house” for example, it’ll give you the meaning + a list of contextual examples of the word house being used in sentences.

Including the audio that you can listen to and check your pronunciation against.

You can also add these words to the My Flashcard tool.

Anything word in the course can be added to your flashcard pack for later study.

With Rocket Portuguese you own what you paid for (important)

Imagine actually owning what you paid for! 🙂

Many online language programs and courses are going totally subscription-based these days, but Rocket is still currently a one-time payment product.

The problem with other courses (e.g. Rosetta Stone) is that you either get locked into a contract or you need to continue using their program.

Your limited in what you can do.

You can download the entire Rocket Portuguese course for offline use.

Want to print it all out? You can.

Want to download all the audio as MP3’s and listen to them on your iPod? Easy.

Being able to do this is a huge selling point in my opinion.

Some of the less desirable elements of Rocket Portuguese

There are a few aspects of Rocket Portuguese that I think need addressing, fixing or adding:

Rocket Portuguese retains its value over the long term.

It’s a comprehensive course (despite only having a single level at the time of this writing) and covers a wide range of topics.

Some of the features I’ve mentioned need improvement (or removal) but the natural audio dialogues are where Rocket Portuguese shines.

Combine it with Glossika and italki and you have all you need to progress to fluent proficiency in Portuguese.

You can try it out by clicking here: