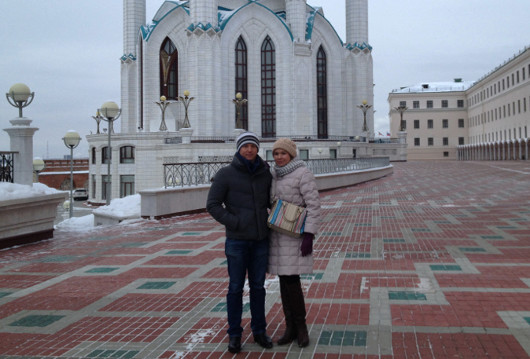 Behind me and my new friend there is the Qolşärif mosque at the Kremlin in Kazan. It’s a nice place to visit even when it’s freezing cold. 🙂

I’ve already been living in Russia for about a month, learning and using Russian every day.

I have to say that of all the places I’ve been to and lived around the world, the people I’ve met here so far have been some of the most hospitable and helpful people I’ve ever met.

Russia is already proving to be one of the most rewarding language immersions I’ve ever done.

For all the negative press that Russia often gets (nearly all of which I think is bullshit and undeserved), the reality is that it’s a great place to be with some of the warmest, friendliest people you could possibly meet. Of course, since Russia is a such big place it’s hard to say for sure if what I’ve experienced is true for the whole country or just the region I’m in but I’m sure I’ll find out later when I head north.

It’s been really fascinating getting to know more about the local Turkic people, culture and cuisine here too. You can really see how closely related it is to Turkey with the traditional food and costumes, and I’m noticing the connection in a lot of local words and names to the Turkish language (e.g. the Tatar word for a convenience store is ашамлыклар – лар (-lar) being a plural suffix in Turkish).

Some parts of the world really are sink or swim when it comes to learning the local language.

In Korea where I just spent the last year learning the language, you can live very easily without learning much or any Korean at all. Local people will for the most part adjust for and accommodate you as an outsider (I think it’s shameful that English-speaking expats expect this though but it’s true).

I always found that to be a big challenge in Korea because so many people would insist on speaking English even when it was clear that I was trying to learn Korean.

Here you really have no choice but to try your best to communicate in Russian from day one. I’m forced out of my comfort zone every day. The few times I’ve asked people “Вы говорите по-английски?” (“Do you speak English?”) and received that same facial expression of “No and why should I?” have been a welcome challenge to say the least.

Survival and necessity push us beyond our limits

If you only want to learn a language then you might succeed.

If you need to learn a language then you will succeed.

Over the last 4 weeks I have genuinely needed to use Russian every day.

I work with people who don’t speak English. The friends I hang out with on weekends here don’t speak a word of English (including the one in the picture above). I’ve had to join a gym, get a haircut, buy my first pair of ‘Russian’ Winter boots (it’s a miracle I still have toes), as well as see a doctor (not related to my toes) – all without the luxury of any English.

It’s forced me to learn vocabulary and expressions that I otherwise wouldn’t have learned (at least not for some time).

As an added bonus, working for one of the wealthiest families in Russia means that I’m also constantly surrounded by and interacting with Russian staff – maids, nannies, bodyguards, security, drivers and so on. I’ve had to learn a lot of work-related vocab quickly because none of them speak English and it’s important that we can communicate.

Many times it’s about voluntarily putting yourself in situations that stretch you too.

For example even though there’s a nice, flashy gym down the road that I was initially going to join, I instead decided to join a small, ‘basement-type’ gym where the equipment looks more like something Fred Flintstone would use. I did this primarily because I thought it’d be a better place to meet people.

The Flintstones’ gym has much older equipment (still does what I need it for!) but so far it’s been a great place to meet people because it has a small and cosy atmosphere. 🙂

Likewise, I could continue doing my job without communicating with my co-workers but it would make my job tougher than it already is not to mention boring so I’ve made it a necessity to be able to speak with them as quickly as possible.

Create need where this is none

I know that many of you who are reading this aren’t doing language immersion abroad so of course you won’t have survival needs but the point of need over want is always applicable even if you’re at home.

Necessity for something is a much stronger motivator to push through than simply having an interest or desire to do it (though this is important too of course).

You can create need by setting yourself short and long term deadlines that require you to reach a certain level in your target language by a certain time (e.g. travel dates, exams, regular meet-ups, etc.).

I find that having weekly private lessons is a great need creator because each week your teacher will expect you to have completed homework and will challenge you on previously learned material (if he or she is a good teacher that is).

You could also create a blog like this one and let your readers keep you accountable which in turn creates a need to keep constantly improving.

Even finding a course that costs quite a bit of money can be a good need creator because nobody likes to fork out lots of money for something and not get their money’s worth – I need to do well at this because it cost me fortune.

No progress update video on my Russian this week

I had a beautiful woman in my bed yesterday.

She was actually a doctor giving me a shot (needle in the backside!) for a really nasty stomach virus I picked up this week.

I was going to put a video together for this post but I’m still bedridden and certainly not camera material at the moment so that will have to wait at least a few more days.

Over the coming weeks I’ll share some great resources with you that I’ve recently sampled for Russian too so keep checking back for that (still open to your suggestions as well).