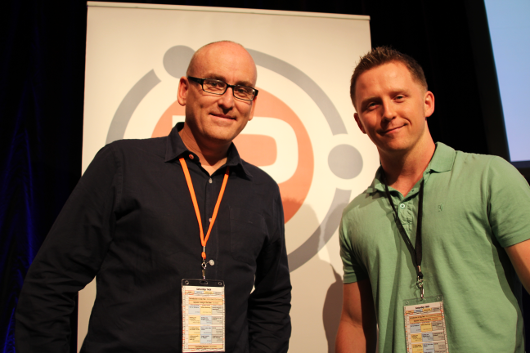 I’ve just come back from a great weekend at the Problogger Event with 450 other bloggers (put together by Darren Rowse of Problogger). As a writer and someone passionate about being part of an online community it was great to feed off the energy of so many like-minded people!

I have a question for you:

How many people around you know that you’re trying to learn a foreign language?

I mean people in your life – friends, family and colleagues. Is it something that you’ve kept to yourself or is it well known?

Something I’ve seen with a lot of adult language learners is a tendency to keep what they’re learning to themselves – as if learning is a private matter – or to only share it with a select few people around them.

This is not necessarily because of shyness or being embarrassed to talk about it (although this may be the reason for some people) but perhaps you just don’t see the value in telling the world about it.

Today I want to convince you just how much of a positive difference it can make to your learning success when you go public about what you’re doing.

Here’s a great and very relevant quote from Keith Ferazzi’s book Who’s Got Your Back?:

“Once you make a public commitment, there’s no turning back.

Essentially, you don’t want to let yourself or other people down. By committing publicly, you’re far more likely to follow through on your promises.”

I’ve been enjoying learning languages for over a decade.

However I have to say that since I started this blog over 4 years ago, my own language learning success and general motivation has sky-rocketed and been constantly high during that time.

I’ve set goals and I’ve poured my heart and soul into reaching those goals.

Because I’ve shared my goals and plans with you and that gives me a solid reason to get up every day and make an effort to keep going with it.

Of course I do it for myself as well and because it’s something I love but knowing that so many people are aware of what I’m doing and wanting to see me succeed pushes me harder – even on days where I’m down and just not in the mood.

If you’re setting yourself to something long-term like a foreign language where keeping your motivation level high is so important then the more people who know about it the better it’ll be for you.

I get a lot of emails and messages through social media these days from people who just want to know how my Korean’s going for example. Something so simple as a complete stranger on the other side of the planet sending me an email to ask how I’m doing just spurs me on.

I think to myself, “Shit. I don’t wanna let this person down!”

It really makes a difference let me tell you.

No one likes to fail and nobody likes to be seen as a person who gives up easily.

Be specific about what you’re aiming for

Be super specific about it so people can hold you to it!

That book that I quoted above (Who’s Got Your Back?) calls it a press release for your goals.

Bam! Here’s exactly what I’m doing and now that the world knows about it they won’t get off my back until it’s done.

So who’s got your back (and who doesn’t)?

You don’t need a blog to get this kind of accountability (although it definitely helps!).

What’s more important than 10’s of thousands of strangers landing on your blog every month are the people you see every day – friends, family and the people you work or study with.

They all know the language you’re currently learning and they’ll check in on you to see how it’s going. Positive nagging is a good thing.

They’ll hold you accountable and it puts healthy pressure on you to stick with it.

Of course it needs to be said that sometimes there are people around us who don’t have our back – people who respond negatively to what we’re trying to do. I know in my own life that there have always been negative voices that demotivate more than motivate so make sure to surround yourself with encouragers, not discouragers.

Doors are more likely to open when you go public

One final point I want to make and a really important one.

When I started learning Arabic over 10 years ago I told everyone about it. I was excited about the challenge and I wanted to share it with people.

I went to an Israeli shop one day (of all places!) and started chatting to the lady behind the counter about the Middle East and how I’d started learning Arabic the week before.

That one mention – that brief, seemingly insignificant share with a total stranger – changed the direction of my life for the next 10 years.

That woman knew someone who knew other people who became the center of my world for many years after that. I may have ended up in the Arab world anyway (who knows!) but I’m glad it happened the way it did.

Go public about your language learning goals and benefit from the accountability and new opportunities it’ll bring you.

You can start by sharing it with everyone in the comment section below (or on the forum). 🙂