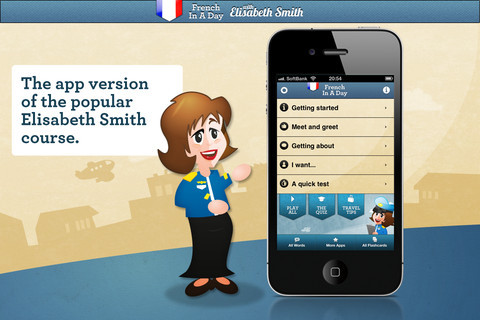 For a few dollars/pounds more, I highly recommend the Earworms ‘Rapid’ series. Check it out here.

I recently received a sample of the French edition of Elisabeth Smith’s In A Day iPhone/iPad apps from Hodder Education.

While I would usually be dismissive of any language product that has “in a day” attached to it, I was really impressed by this app’s unique style of delivery which is aimed at the complete beginner, and is non-grammatical with a focus on highly relevant vocabulary and expressions.

The app was built on the backbone of Mirai Language Systems (which has its own series of similar language-specific apps too which work in much the same way. E.g. Mirai Japanese).

The Elisabeth Smith In A Day series is also available in German, Greek, Italian, Spanish, Mandarin, Polish, Portuguese and Turkish.

Here’s a video I put together to show you how it’s laid out and some of its features:

Elisabeth Smith and her method

Elisabeth’s a polyglot from Germany (now living in the UK) who is well-known for her contributions to the Teach Yourself series of books – in particular the books with ‘fast’, ‘rush-hour’, ‘instant’, etc. in their titles.

This is the promo video (WARNING: seriously cringeworthy promo video) for her Fast In A Day/In 6 Weeks series (which the iPhone app is based on):

She makes the point that most language courses are “too long and too tedious” and full of vocab and grammar that you won’t necessarily use which I definitely agree with.

Elisabeth’s aim is to implement what she considers to be necessary French phrases, vocabulary and expressions based on her own experience, and this is clear in the dialogue of French In A Day which doesn’t waste time on pointless target language content.

Similar to other language learning products (e.g. Earworms Musical Brain Trainer), the In A Day series focuses on dialogue between a learner (Andy) and the teacher (Elisabeth).

Apps and audio products like this are usually aimed at travellers and business people who want to arm themselves with just enough target language to get around with.

I think an app like French In A Day is also great for people to dip their toes into a new language and learn a few of the basics before starting a course or serious study.

It’s a fun way to educate yourself with your iPhone or iPad while waiting on a bus or in a queue and only costs about two bucks.

French In A Day can be found in the Apple App store.

If you try out any of these other languages, please share your thoughts (good or bad) in the comment section below.