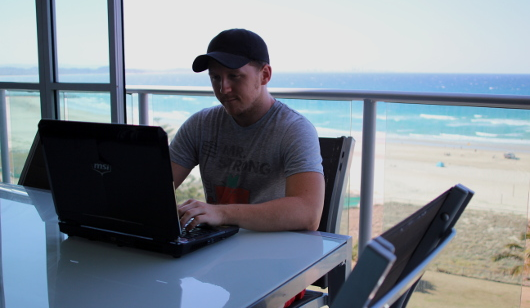 Update: If you’re really serious about wanting to be a freelance translator then I highly recommend a book like The Translator Training Textbook by Adriana Tassini.

As many of you know, when I travel and live in a foreign country to learn the local language I usually support myself by teaching English.

I don’t do this because I consider ESL teaching to be a great career choice (on the contrary!) but rather because it provides me with a consistent source of income while I’m away. It also gets me in a social environment every day where I can meet native speakers and most jobs tend to offer accommodation, airfares and medical insurance which makes life a lot easier!

However, I also have a few online projects that keep me afloat at times when I’m not teaching – one of which is translation work (Arabic to English).

I’ve been fortunate enough to get quite a bit of translation work lately while I’m waiting for my visa to come through for my next big move (it’s been a frustrating wait dealing with annoying red tape since it’s one of the hardest countries in the world to visit but hopefully I won’t have to wait much longer!).

Since I get questions about translation work from time to time I thought it would be a good idea to respond to some of it here. 🙂

At what point did I decide I wanted to do translation work?

I was in a coffee shop years ago and I started chatting with a translator who ran her own business in French translation (I think she’d set up her “office” in the corner of the cafe).

At that stage I was already conversationally fluent in Egyptian Arabic and people were always saying to me, “Why don’t you use your Arabic skills to earn some money?” but I had never considered freelance translation as an option because I didn’t fully understand what the job involved.

Just having a friendly chat with this girl opened my eyes to the fact that translators work from a language that they’re not native in (in my case Arabic) into their mother tongue and not vice-versa. I was attracted to her lifestyle more than anything and the fact that she could set her own prices and her own schedule, as well being able to take her work anywhere she wanted.

While it definitely requires that you have a very advanced level in the language to really capture the nuance of what’s being said in a text, the real skill of a translator is not just in how well they know a language.

There were of course some extra difficulties for me as a speaker of a colloquial Arabic dialect that’s almost never written as I had to invest a bit more time into studying Modern Standard Arabic which in many ways is like a completely separate language.

As a side note, for anyone considering Arabic translation I can’t recommend enough the book Thinking Arabic Translation – A Course in Translation Method: Arabic to English (James Dickins).

You should only translate content that you have some expertise in

If you don’t have some kind of background (either academic or work experience) in the stuff you’re being asked to translate then it’s a good idea to leave it alone.

Take a look at this legal paragraph for a second and you’ll see (I just plucked it randomly off the internet):

The Issuer and the Company hereby ratify, approve and authorize the use by the Underwriter, prior to and after the date hereof, in connection with the offer and sale of the Series 2005A Bonds, of the Official Statement. The Underwriter agrees that it will not confirm the sale of any Series 2005A Bonds unless the settlement of such sale is accompanied by or preceded by the delivery of a copy of the final Official Statement.

Now ask yourself – if a translation agency sent this to me in another language could I produce something like this?

It’d be bloody difficult trust me (speaking from experience)!

But a translator who has qualifications or some kind of background in Law could quite easily write something like this because it’s their area of expertise and they’ve seen it many times before.

Likewise, would you feel comfortable translating a medical or legal document that could be damaging to somebody if not done properly?

If you’re thinking about getting into translation, think about one or several areas of expertise that you have (something that you’re trained or experienced in) and aim for translation work in that specific area!

Take anything you know really well and specialize in it.

If I’m conversationally fluent in a foreign language how do I get started?

The only way you get better at something is to do it often.

Remember that translators are excellent writers first and foremost. Just because you’ve got killer foreign language skills or are extremely fluent in a language doesn’t mean you’re any good at translating.

You could have near-native fluency and still be a pathetic translator believe me!

But let’s suppose you’re not 🙂

My advice is to keep expanding your vocabulary in subject matter that you want to work with (it helps to use tools like Memrise and Anki for this), read up on some translation theory/methods with books like this and this (familiarize yourself with important issues related to creativity and flexibility in translation, ethics and so on), and most importantly translate everything you can get your hands on for practise.

The issue of creativity in translation is a huge one because there will always be times where you can’t just literally translate everything word for word. You often need to strike the balance between being literal and keeping true to the mood of the original text. Sometimes this means you have to use a completely different word, expression or sentence to carry the same effect intended by the original author.

One thing I often do is go to news portals where there are usually tabs at the top of the website for different interests (Technology, Health, Business, Politics, etc.) and just find interesting articles to translate on various subject matter.

There are so many names of organizations, abbreviations and so on that you’ll come up against repeatedly and possibly won’t recognize at first. Compile your own list and it’ll be a handy reference for when you need it.

Translation accreditors like NAATI in Australia and ATA in the USA sell practise tests that you can order online too which I also highly recommend (you’ll need this certification in some countries for many jobs but it’s expensive and does expire after a while). Since every country is different you’ll have to do some research to find out what the rules are where you are but this isn’t always necessary for overseas work).

There are also associations that you can join (e.g. AUSIT and ITI) which are great for helping you network with the right people in the industry, attend workshops to increase your skills and find work.

Contact translation agencies online and they’ll often send you a test translation before deciding to work with you.

You should also check out Proz and Translators Cafe which are forums dedicated to translation (not entirely free to use!) but bear in mind that depending on your language set there’s usually a lot of competition for jobs posted there.

Once you do a couple of good translations for an agency you’ll start to build up trust and they’ll send you jobs more often (like any kind of agency work really).

You eventually should get hold of some CAT (computer-assisted translation) software like SDL Trados which is pretty much essential for many jobs. An excellent CAT tool to get started with is OmegaT which is completely free (I still often use this as it runs well on Linux). The benefits of using CAT tools is that as you translate, the software stores what you’ve translated in its memory so that when you come across the same or a similar sentence in future (either in the same document or another one), it saves you having to translate it all over again.

It can cut your work in half especially if you’re working on a document that’s really repetitive!

The most important reason to use CAT tools however is that they make sure you stay consistent in what you’re writing.

It certainly can but in my case not really! 🙂

I tend to take jobs in drips and drabs but I’m not active at all in trying to market myself to big clients (I have other projects taking up my time).

If I did market myself I’m sure it’d be a lot more lucrative for me since Arabic is not quite as competitive as languages like French and Spanish are.

So how it works is I get emails from agencies from time to time who say something along the lines of, ‘Here’s such and such a job. Are you interested?’ and usually they’ll set an offer based on the word count or a flat rate if it’s small. Then it’s just a matter of accepting the job, completing the translation and emailing it back to them before the deadline.

A few days later I get paid electronically.

No phone calls. No face to face contact whatsoever.

This is great if you want to move around a lot and deal with clients/agencies via email at your own convenience but just remember that you’ll be spending a lot of hours indoors staring at a computer screen. 🙂

Since I love outdoor adventure and social interaction this gets stressful for me at times!

The money I get from what I do could easily allow me to live comfortably in the kind of countries I like to live in where living costs are extremely low (e.g. Egypt or Georgia) but if I wanted to set myself up in Australia or Ireland with the high living costs of those places I’d need to market myself a lot more actively to be able to live off translation alone.

I should note too that I am registered as a business for tax purposes in my country which is a legal necessity (in fact I’m registered to pay tax on everything that I get through my various streams of online revenue).

Also, if you’ve got a rare language set then you might find fewer opportunities but they will most likely pay more when you do find them.

Ultimately I love what I do (even though I am really hoping to find the right girl, get married and buy a house in the next couple of years with an in-house or government translation job ideally).

I’m not a rich guy but I have no debt and everything of value that I own along with everything I need to sustain myself abroad fits in my backpack which is very liberating indeed! 🙂