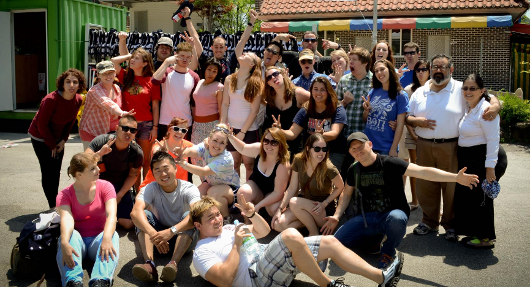 UPDATE: As is always expected, this kind of post draws defensive reactions from some people – especially those who are learning languages for the sole purpose of reading literature or for academic reasons.

While I do believe that reading skills are greatly enhanced by speaking practise, this post is mainly directed at people who are aiming to speak a foreign language.

You will never, ever learn to speak a foreign language properly without being a sociable person.

Language serves as a bridge between two or more people, whether it’s written or spoken and it’s nurtured through our interaction with other human beings. So many people never become fluent speakers of another language because they don’t grasp (and put into practise) this simple truth.

Stop creating a false dichotomy between ‘social language learners’ and whatever the opposite of that is (anti-social maybe?).

Language is a social thing.

The ego-busting fact of the matter is that no one cares how much theory you know. What matters is if and how well you interact with others.

Extroversion/introversion and sociability are not the same thing!

If there is such a thing as an introversion/extroversion scale then I’m about as introverted as you can get.

I’m a deep thinking, very analytical and reflective person, and if I don’t get frequent ‘me time’ to retreat and recharge then I feel drained and stressed out.

If I go long periods without having my alone time then I get cranky as hell! 🙂

And yet when people meet me they remark about how much of a people person I am. I’m a very self-confident guy and I get a kick out of sparking up conversations with complete strangers wherever I am.

This wasn’t always the case though! It’s something I’ve improved over the years – as I would with any skill – to the point where sociability for me has become a vital part of my daily routine.

The reason why an extremely introverted person like me can be a great people person is because introversion has nothing to do with sociability.

You need to stop using introversion as an excuse for your anti-social behaviour!

Sociability is your motivation or desire to talk with and be around other people. It’s your willingness to put yourself out there. It’s a decision we must make.

You choose to be anti-social and that’s why you’re not getting the results you want.

While introversion and extroversion may effect your personality and learning style, it has absolutely nothing to do with your willingness to meet other people.

Shyness is something else entirely.

Some of us do have crippling social anxieties which hold us back – even for the sociably-inclined.

For me personally this manifests in the workplace if I’m teaching while being observed by my boss or co-workers. I’m a great teacher normally but I struggle to perform well under that kind of pressure.

Many people dread public speaking. Others I’ve spoken to have a similar kind of fear from simply talking to strangers in public.

Whatever the severity of your shyness or social anxiety is, the truth of the matter is that the only way you’re going to beat it is to face it.

I don’t like heights at all and planes used to scare the hell out of me but the more I travel the easier it gets.

Keep confronting those fears and fix your mind on how quickly you’ll improve as a speaker by meeting people.

Cast aside any silly thoughts about people judging you for making mistakes (they aren’t!) and be on a daily mission to interact with new people in your target language.

Put willingness to action and reap the benefits

Sociability is not confined to bars and night clubs.

If you don’t like small talk (neither do I) then you don’t have to. Talk about meaningful things. Be interested in the people you talk to – actually give a shit about other human beings!

Stop calling yourself an introvert and using that as an excuse to sit in front of your computer clicking through flashcards or memorizing more grammar for that “some day” when you’ll use it.

Those things are important but they’re frankly a waste of time without other people in your life.

You need constant interaction to improve.

Language proficiency is ultimately measured not by all the vocab and grammar you’ve memorized but by how you put it to use, and this is only going to be improved by stepping outside your comfort zone and being sociable.