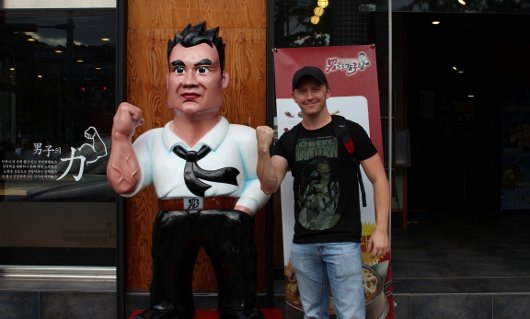 I made a slight cultural boo-boo two days ago that prompted me to write this very important post on how important it is to be a social risk-taker.

Right beside my apartment here in Korea is a small, family-run convenience store that I go into every day to buy food and I usually try to practice a little bit of a Korean with the kids who work there after I finish work.

Using hand gestures and broken Korean, I try to elicit new language from them, repeat cash amounts after them and point to things in the shop saying, 이거 뭐예요? [ee-go mwo-ye-yo] (What is this?).

I always learn a lot from our brief exchanges. 🙂

Now, I’ve really wanted to get to know the parents who own the shop because they’re there more often and they seem really friendly so I tried to initiate some chit-chat with the mother by asking her – using the polite form in Korean – what her name is.

Her response to my question was pretty apprehensive.

Now, everywhere else I’ve been and lived in the world it would be strange not to ask questions like this when you meet somebody but here in Korea there are layers of social hierarchy that the society takes seriously. She was much older than me and therefore, as my Korean friends explained to me afterwards, it was impolite of me to ask that of an older stranger.

If she had of been a younger woman it probably wouldn’t have been an issue (although a young woman might get other ideas). 🙂

I did manage to clear it up by explaining that I’m learning Korean and just want to talk to people which she was happy about in the end, and she eventually introduced herself.

I’m not sorry for making this mistake.

Part of the reason for my success with other languages is due to the fact that I put aside my fear of making mistakes – language and cultural – and just put myself out there. You’re never going to get anywhere if you let shyness, introversion or fear of what other people might think hold you back from giving it a try.

Sure, you might make some cultural boo-boos by saying something inappropriate or making grammatical mistakes but so friggin’ what? That’s part of the process of learning.

People can see you’re a foreigner making an effort and even if they do get pissed off and dislike you (highly unlikely), you’ll learn an important lesson for next time.

When I was in Ireland over a month ago on a mission to improve my Gaeilge, I was harshly criticised in an email by another popular language learning blogger who was also on the same course because he saw me walk up to a group of people I didn’t know in a pub, sit down and introduce myself to them.

I was accused of being rude for doing this.

Now I’ll be honest – this did make me consider that maybe he was right. Maybe it was inappropriate for me to do that and I was the only one who didn’t realize it.

Putting aside the fact that where I come from this is perfectly normal in a pub, I came away from my time in Ireland with a lot of new friends who I met up with several times throughout my stay in different parts of the country.

We’re all still in contact and looking forward to the next course when we can catch up again. There were also enormous improvements in my Irish as a result (which attracted numerous interview requests from newspapers and radio stations) and I now have language exchange partners via Skype that I previously didn’t have.

It was a massive accomplishment – all thanks to being a social risk-taker.

Now, if I had the same attitude of the person who criticised me I would have sat in the corner of the pub not knowing anyone and I wouldn’t have come away with the experience that I did. Perhaps it was rude initially but the results of me taking that risk far outweigh anything else.

I also experienced the same kind of results in Egypt and Georgia where I came away with precious friendships as well as enormous gains in my language learning by putting myself out there.

Today I’m giving you some homework.

Every time you have an opportunity to use your target language – whether it’s ordering food in a restaurant, talking to a friend, taking a taxi, Skyping somebody, or whatever – I want you to take at least one risk.

What do I mean by that?

I’ll give you an example:

When I go into a convenience store, the gym, a cafe or wherever here in Korea, rather than only using the language I need to do whatever it is I need to do (e.g. order a coffee), I push myself to go beyond what’s necessary. I’ll ask for a takeaway latte, use the necessary dialogue (simple request and thanks) and then I’ll talk about something – anything – that brings the exchange up a notch.

This could be something as simple as it’s really cold today isn’t it? How’s business? This is really good coffee.

Last week I was in a cafe and a song came on the radio that I liked the sound of (a Korean song). So I used Google to find the word for song in Korean (노래) and used to it as a conversation starter by asking a couple of people what the song’s called.

I say these are risks because anybody can walk into a shop, use a standard can I have…? request from a course book, ask how much, say thanks and then walk out.

It’s only the risk-takers who see this as an opportunity to add some flavor to what they’re saying – even if it’s at a very basic level. It’s the risk-takers who use the small amount of language that they have to actively pursue friendships without being afraid of what others might think.

Don’t wait to be introduced to people – get out there and take some risks.

Then you can come back here and tell us all about the new acquaintances and friends you’ve made in the comments section below. 😉