This is a guest post by John Renfroe from Outlier Linguistic Solutions.

Over to you, John.

My name is John Renfroe.

I’m a polyglot (English, Chinese, some French, learning Japanese and Cantonese) and I do research on the Chinese writing system.

I’m working on a team with Ash Henson and Christian Schmidt to develop a new dictionary of Chinese characters for learners that focuses on increasing learning efficiency. 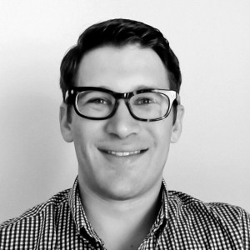 I thought the language sounded cool — as a music major, maybe the tones appealed to me. But there was this scene where a calligrapher wrote the character for sword (劍) and explained that there were over twenty different ways to write it.

I’ve always found writing systems fascinating, so I was hooked.

The next day I got my hands on a Pimsleur course, and then later the FSI Standard Chinese course, and onward from there.

I spent a LOT of time learning characters, and learning about characters.

I eventually moved to Taipei to step up my learning and dive into the writing system on an academic level.

While I was taking language classes and studying Chinese as hard as I could, I also kept learning about the characters.

The first full book I read in Chinese was one on ancient Chinese writing by Li Xueqin (李學勤《古文字學初階》).

I audited an intro to Chinese palaeography course in the Chinese department at NTNU as soon as my Chinese was good enough, and the following year I took a full load of graduate-level coursework in palaeography and Chinese linguistics.

Believe me, along the way I learned a lot about characters and how to learn them.

The first principle of effective memorization is meaningfulness: you must at least be able to make sense of or attach meaning to what you’re memorizing in some way.

This is why mnemonic techniques are so effective.

You attach a keyword or mental image to a character component that you don’t know, and suddenly it has some meaning to you.

The problem with these mnemonic techniques is that they often obscure how the character is actually structured.

Many of them ignore the function that a particular component plays in the character, and they often break down the character in ways that hide the logic of the underlying system.

But knowing this system gives your mind a mental framework into which you can put new characters, reinforces characters you already know, and makes it easier to learn characters in the future.

So it seems that the most effective way to learn characters would be one which combines powerful mnemonic techniques with a correct understanding of how characters work.

With China’s rising influence in the world, there’s a greater need than ever for people to be able to learn Chinese to a high level in order to understand China on its own terms and foster cultural exchange.

And to do this, we need better tools and more efficient learning methods.

Academics like Victor Mair and David Moser have written fairly extensively about the need for a better, more etymologically accurate way to teach characters.

But there’s the problem: there is nothing out on the market for learners which accurately explains how Chinese characters work.

They might get it 70% right, but that leaves you with a lot of misconceptions and misunderstandings.

**NOTE: Donovan here. Since this article was written, I’ve actually found the book Chineasy to be a fantastic tool for learning Chinese characters.

Obviously, this takes a great deal of academic training, and most of us don’t want to have to get a PhD in Chinese just to learn Chinese.

That’s why we’ve started developing a new dictionary of Chinese characters for learners.

We’ve taken our extensive academic training and are using it to build a new dictionary of Chinese characters which focuses on increasing learning efficiency by fostering a correct understanding of the system underlying the characters. David Moser has called it “easy to use, user-friendly, very clear — but at the same time correct and comprehensive.”

What are Chinese functional components?

Functional components are the parts of a character form which express sound or meaning.

They can also serve as a replacement for an earlier form, which I’ll get to in a moment.

You might have heard of them but chances are, you’ve only heard of sound (or phonetic) components and semantic (or signific/meaning) components.

Check out the examples for 美 and 尖 below and you’ll see the difference. 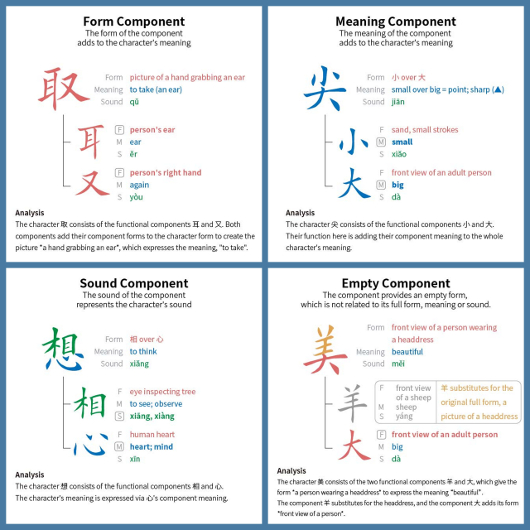 A form component depicts something.

In the example above, we have a picture of a hand 又 taking an ear 耳.

A meaning component adds its meaning to the character’s meaning.

In the example above, we have “small” over “big,” which expresses the meaning “sharp” or “pointed.” Note that the character is using the meaning of 大 here (big), not the form (a person).

A sound component gives a hint about the pronunciation of the character.

In the example above, 相 xiāng serves as the sound component for 想 xiǎng.

The dictionary we’re working on will have explanations and simple formulas which explain these relationships.

An empty component gives neither sound nor meaning.

Some empty components serve as substitutions for a sound, meaning, or form component in an older form of the character, while some serve merely to distinguish two characters from each other.

In the example below, 羊 yáng, which usually means “sheep,” is a substitution for an earlier form — a headdress.

The headdress looked sort of similar to the character 羊, so over time the two converged. So in 美 we have a person (大) wearing a headdress (羊, a substitution for an earlier form — a headdress).

It’s important to note that 羊 is not adding meaning (sheep) or sound (yáng) to the character, nor is it depicting a sheep. This is why we call it an empty component.

It’s simply substituting for the headdress in the older form.

And there you have it: a simple overview of how Chinese characters really work.

Here’s an updated list of the best online Chinese courses.

A lot of resources out there talk about sound and meaning components, but form and empty components might be new to you.

But as I mentioned earlier, a correct understanding of how the characters work as a system is one of the best ways to increase the efficiency of your learning.

This understanding can be combined with mnemonics to make an incredibly powerful system for learning and remembering characters. For instance, a mnemonic for 美 might be to visualize a beautiful woman wearing a sheep-like headdress.

To emphasize that the sheep 羊 is an empty component, perhaps it could be made of glass, not a real sheep.

This is the first time a resource like this will available for learners. Much of the information can’t be found in English. Even in Chinese, you’d have to read some pretty heavy academic books to find it all, so this will be the first time all this information has been brought together anywhere.

One thing readers of The Mezzofanti Guild might be interested to hear is that we’re making this a bilingual, multilingual resource.

Multilingual because we’ll be translating it into as many target languages as possible, starting with English and German (our team’s native languages).

Too many people have to learn Chinese through their second language — English — and we’re trying to do what we can to fix that problem.

Once the first version is finished, we’ll also do versions for people learning Cantonese and Japanese.

IMPORTANT: I’ve not heard back from John or his team yet about the release of this dictionary unfortunately so I’m not sure if the Kickstarter was successful.

For now, take a look at my compilation of Mandarin Chinese resources here.