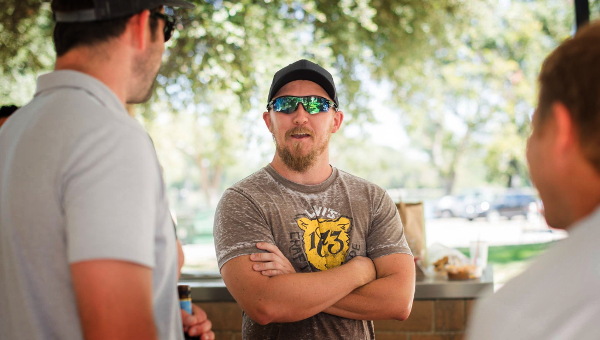 I had an interesting thing happen to me recently that prompted me to write this today.

I was out walking here in California and came across a Lebanese food truck on the side of the road. I thought to myself:

“This is a great opportunity to practice some Arabic and meet some new people.”

I stood in line waiting to be served by an older Lebanese woman and there were lots of people standing around within earshot.

As I got up to the front of the line to be served where I was planning to introduce myself in Arabic, the nerves hit me hard. I was suddenly very nervous to talk to this woman.

This was something I noticed straight away and even asked myself:

“Why the hell am I nervous?

I’ve done this a million times all over the world.”

Not to mention that Arabic is my best language after English.

I couldn’t tell at the time if it was nerves to speak to her in general, fear of screwing something up or concern about using Arabic in front of a bunch of English-speaking strangers and what they might think.

Long story short, we ended up having a wonderful chat (the nerves went away after I started speaking to her) – I met her husband and kids and we exchanged contact information. I got to practice lots of Arabic that day and considered it a successful encounter.

But I went home and reflected on what happened earlier.

Has it happened before and I just didn’t pay attention to it at the time?

This may come as a surprise to some of my readers that I still get very nervous at times when practising foreign languages with other people.

Both in person and online.

If you met me, you’d probably think “this guy’s an extrovert”. I come across as incredibly confident and talkative but I’m very much introverted.

I’m what I call a ‘sociable introvert’.

This means that while I crave ‘me time’ like every introvert does to recharge, I have no problem with sociability itself (see this post where I explain the important difference).

If you’re afraid of talking to people in general, this has nothing to do with introversion.

On the other hand, if you just don’t like being around other people, then that’s a lack of sociability. If you fall into this category then my question is: why bother learning to speak a foreign language at all?

As far as social anxiety is concerned, I don’t believe I have major issues with it. Meeting new people has never bothered me or been hard for me as it is for some people.

I have always struggled with performance anxiety.

Most of us hate public speaking which is one form of performance anxiety.

But even when I was a kid, though I was excellent at sports for example, whenever I had to play a game in front of a crowd and all eyes were on me, it was crippling. If there was ever a skill that I was great at and could do perfectly in private, put me in front of people and I felt like an amateur again.

This even affected my employment in the past where I once opted out of a job interview because the process required a performance test (even though the task itself was a piece of cake).

I threw away a potentially high-paying career back then because I didn’t have the nerve to do a simple task in front of a group of strangers!

Performance anxiety is a huge hurdle for a lot of language learners that I can relate to.

So here’s where I give you profound insight into how to solve this problem once and for all.

As I’ve intimated, I still have to deal with performance anxiety even after all these years of learning many languages and speaking to people all over the world.

Like my fear of flying, it never fully goes away.

But here are some steps I take that I’m sure will help make it easier for you:

1. Accept that you won’t ever improve unless you just do it

This is your most important realization to make.

You cannot become a better speaker of a language unless you speak. Full stop. End of story.

Reading and writing won’t make you a better speaker either.

Only speaking will make you a better speaker.

I compare it to my fear of flying (I’ve flown around the world more than anyone I know and yet I still find it difficult to fly every single time I get on a plane!).

Even though flying makes me nervous, I tell myself:

“You can’t get to your destination any other way unless you’re prepared to sit for months on a ship at sea.”

Like speaking, flying is absolutely non-negotiable for what I’m doing.

I have no choice but to suck it up each time and just get it over with.

You can’t beat (or at least challenge) the fear of anything unless you face that fear head on either.

Just like public speaking, if you know your stuff well then you’ll be far less nervous overall.

Performance anxiety is basically an irrational fear of screwing something up in front of other people and its perceived repercussions.

How do you screw up speaking a language?

Forgetting what to say (primarily).

You’re going to forget things no matter what but you can take a lot of pressure off by being prepared beforehand.

What do I mean by that?

Try to predict where a particular conversation might head and use that to inform your study. If you’re going to talk about your family for example, then you’ll want to familiarize yourself with vocations of your family members, ages, familial terminology (brother, sister, uncle, aunt, etc.).

Having some kind of an idea beforehand and prepping for predictable conversations makes a big difference to your confidence level and greatly reduces performance anxiety.

Some people find it easier to speak with people they know.

I actually perform worse with most things if people I know are with me. I’m not sure why this is but maybe it’s a fear of being judged for poor performance later on by people who know me and may change their attitude toward me for failing (of course this is nonsense!).

One piece of advice I can give regarding strangers is to tell yourself:

“I’m probably never going to see this person again so if I screw up, who the hell cares?”

That takes an element of social pressure off you as you don’t have to feel like your performance will affect the way you’re treated later on.

4. Don’t let reclusiveness be an option

As I said above, speaking is essential to becoming a better speaker.

There’s no way out of it (and no point really).

Chatting online, practicing by yourself, reading – all of these anti-social activities are in no way alternatives to speaking with people face-to-face.

If you convince yourself that speaking with people is vital to success then you will muster up the will to make it happen. Necessity changes everything.

But keep convincing yourself that speaking can wait or isn’t important and you’ll be waiting a long time.

5. Forget about getting it right

So your grammar stinks?

You’re not perfect and never will be.

A big part of performance anxiety (certainly in my own case) is the desire to get everything exactly right before proceeding. I want to make sure that this next sentence that comes out of my mouth is 100% accurate and pronounced like a native.

One of two things happens:

1) The nerves prevent me from proceeding at all.

Or 2) I do proceed, make mistakes and then beat myself up over the mistakes which makes me more nervous the next time round.

Forget about getting everything right. Embrace sloppiness. Nobody cares if you use the wrong tense or forget a word.

6. Stay in control of the conversation

This is a big one that doesn’t get mentioned enough in my opinion.

Control the direction of the conversation as much as possible when you’re practising.

Part of this is natural and I don’t want to encourage you to avoid natural conversations by any means.

But since you’re struggling with the performance anxiety aspect which is made worse when you lose total control and confidence, try to make sure you keep control of where the conversation is heading as much as possible.

Interrupt when you don’t understand.

I see a lot of people ask questions in a foreign language (that’s the easy part) but then when the native speaker responds with a long answer they don’t understand, they just nod and pretend they get it (while getting more nervous as they’re losing control of the discussion).

Politely interrupt and ask for clarification.

Otherwise you’re not going to learn anything.

Finally: Nobody is laughing

And if they are, they’re a jerk and not worth your time.

One thing I’ve learned over the years (and still learning through experiences like the one I mentioned above) is that while you’re sitting there sweating and worrying that everyone’s laughing at your effort, they’re thinking something totally different.

They’re looking at you and thinking about about how impressive you are.

Even if you’re a new learner and can only get a few sentences out, you’ll earn instant respect for trying.

We’re not in school anymore where kids laugh at other kids for just about every stupid thing.

Keep reminding yourself that your performance anxiety is internal and something only you in that moment is experiencing.

Can you relate to this? What’s your strategy?