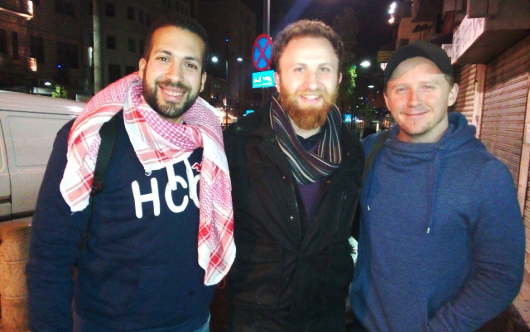 Did you know that people who only speak one language are a small minority group in the world?

There are roughly 7 billion people on Earth right now.

Most of those people are speakers of at least 2 – 3 languages.

This is a difficult concept for a lot of monolingual speakers (people who only speak one language) to grasp.

That means that it’s actually more unusual and remarkable to not know a foreign language.

Think of all those who complain and say that they weren’t ‘born good at languages’ and then consider the fact that most other people around the world speak more than one.

I first had my eyes opened to this truth back in college when I was studying history and reading about average men and women living in the Middle East between 200 BC and 200 AD who would commonly know 4 or more languages.

In the case of a Palestinian Jewish person living at that time they’d know:

Latin (for dealings with the ruling authorities)

and various other languages of people in the wider region that they may have come in contact with.

The situation today is still pretty much the same in many parts of the world.

In most countries people usually have a local/tribal language or dialect, a standard or regional dialect, a religious/liturgical language and an international language like English or French. I’ve got good friends from South Africa for instance who know a family language (e.g. Xhosa), Afrikaans, English and then a working proficiency in other neighbouring, local languages.

And of course it’s becoming increasingly vital for people everywhere to know English in order to use the Internet and engage with the rest of the world which guarantees that most non-English speakers will have at least some proficiency in English – at least enough to use the Internet.

So why do we get so impressed by Western polyglots?

In my experience living and travelling around the world I’ve met some really impressive polyglots from all walks of life.

I remember chatting to this young guy called Ahmed (probably no older than 15) who was working around a tourist area in Egypt.

He was fluent in Arabic, English, Italian, French, German, Spanish and Russian (possibly more but these were the languages I witnessed him using).

This kid was so poor there’s no way he could have learned these languages using the Internet – he simply picked them up by being around people in the street. We’re talking about a guy here dressed in rags, living in what most of us would regard as squalor without learning resources and yet he was able to achieve a very good level of fluency in at least 7 languages.

Sounds incredible and yet there are so many adults and children just like him.

It makes you wonder why when a privileged rich American kid makes a couple of YouTube videos speaking foreign languages he becomes an overnight celebrity and the Western media swoons like mad over him as if he’s done something remarkable (not to mention self-praise).

It’s important we continue to acknowledge the ‘forgotten polyglots’ of the world who are in fact the world’s majority.

So how does knowing that monolinguals are a minority help you?

If being a polyglot is such a normal, common thing in the world then there shouldn’t be any reason why it’s out of your reach to achieve.

When you realize just how ordinary it is to know multiple languages it makes it feel less extraordinary and therefore more attainable by anybody.

If a homeless person can pick up 7 languages without a computer or even books then how much more can you, with everything you have access to, do it too.