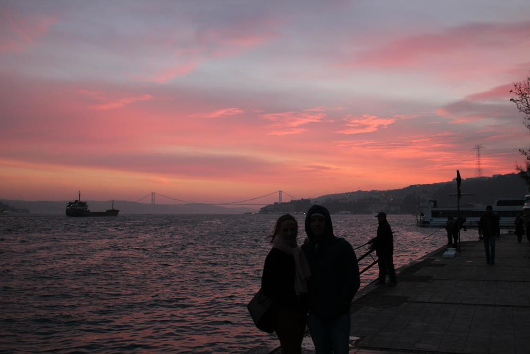 RECOMMENDED: If you’re looking for a quality resource to learn Turkish with, I highly recommend this one.

Since we’re now in the run up to the ANZAC Centenary (the most sacred event on the Aussie and Kiwi calendars) I thought it would be fitting to help those of you who are interested in learning Turkish.

After having spent some time living in that part of the world with his family, Aaron learned an impressive level of Turkish (see the video I’ve posted below). This is a major point of interest for me personally as I’ve lived in Turkey and spent quite a bit of time learning it.

I stayed in Turkey again a few months ago (that’s my girlfriend and I at sunset in Istanbul) and it’s made me want to pick up Turkish again so much!

It’s definitely one my favorite places in the world and a language I love. 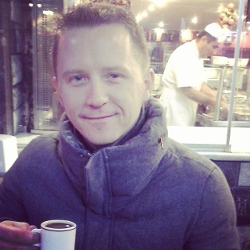 Before we get into the guest post by Aaron, I thought I’d just list a few excellent resources here to help you get started.

This small list is current and after spending some solid time going through most available online resources, these made the cut:

Getting started with Turkish:

Both of these are paid resources and have a very similar lesson style (podcast) that’s more geared for new to intermediate learners.

For free sites that explain the grammar of Turkish comprehensively, these sites do a good job of it (no audio though unfortunately).

There are some excellent vocabulary lessons on Memrise (especially the ‘Hacking Turkish’ ones).

Also if music helps you learn languages, my friends over at Earworms Musical Brain Trainer have a Turkish edition available called Rapid Turkish (see my review here as well).

Riding the mini bus toward my new apartment in the middle of Istanbul my palms began to sweat. The walking bridge with it’s arched blue beams was quickly approaching and with it came my point of disembarkment.

I’d learned a new phrase today – memorized it really – for I had no idea what it really meant, but I knew that if I said it, and said it loud enough for the driver to hear, the bus would pull to the side of the road, the doors would swing open and I would be able to step onto the walk leading home. I’d heard others say it time after time in my week and a half in Turkey and it always worked for natives. But the question remained – would it work for me?

The problem was actually in the spitting out of this new cacophony of sounds and syllables, so strange to a tongue that had only traipsed the English and Spanish languages.

And so there I sat, note card in hand, silently whispering it over and over again. The bridge approached.

I stood and blurted out as best I could:

Despite the fact that I had little command over the grammar or even meaning of what came out of my mouth, the bus driver slowed, pulled to the side and threw the door open. I stepped out into the fresh air and sunshine, let out a deep sigh of relief and rejoiced.

Turkish is a wonderful language. As it marched across the the steps of Central Asia from Mongolia to Turkey a thousand years ago, so it marches across the page today in tight strides with little time or energy for exceptions to the rule or irregularities.

With scientific precision its alphabet was converted from the Arabic to the Latin script in 1929, assigning one sound to each new letter. This is where the easy parts of Turkish lets off though.

Turkish is also highly agglutinating, meaning that it uses a lot of suffixes and infixes to mark or modify words. English too is agglutinating giving us words like suffixation, enjoyment and education. But where English adds an occasional suffix or two, Turkish regularly uses several stacked right on top of another each adding a grammatical feature to the word; negation, passivity, mood, plurality, possession, questioning and many more.

The longest word in the Turkish language is:

It has 70 letters and means “As though you are from those whom we may not be able to easily make into a maker of unsuccessful ones.” Not a word anyone would use in normal conversation, but an example of what one can do with agglutination none the less.

Another aspect of Turkish that takes some time to get used to is its demand for vowel harmony, the phenomenon in which all the vowels in each word must be of the same class, i.e. all front vowels or all back vowels. And of course like many languages, there is a whole range of Turkish grammatical structures for which there is no real equivalent in English.

As a Turkish language learner myself I will in no way claim fluency over the language, but as someone who has worked to learn it in an independent, self-directed manner over the course of the last four and a half years I will offer a few pieces of advice that I hope will make your journey toward fluency in Turkish – and perhaps any language – more enjoyable and successful.

As a language coach, I’ll always encourage my clients to think about their personal learning style.

Many a language learner has been told to join a Turkish class filled with lecture and workbook exercises when their learning style would have them thriving out in the community interacting with the locals. When they begin to fall behind, most conclude that they must not have the language learning “gift.”

There are literally hundreds of resources, activities, methods and opportunities to learn Turkish – you just need to find what is the right one for you. For me that was with a language helper, a young college student who was my Turkish resource and who now as well is a good friend.

Like any new language, Turkish is filled with both new sounds and new sound patterns.

These are at first strange to the ear for an English speaker and completely foreign to the tongue. By listening early and often, learners will begin to train their ears to these new sounds and sound patterns even before understanding meaning.

This is especially important for Turkish with its use of vowel harmony. You cannot pronounce it correctly if you cannot hear it and you will not be able to hear it until you’ve heard it a lot. So go online and find podcasts, videos, music, movies or radio stations and begin listening to Turkish right away.

Finding input that is comprehensible is key to beginning to to actually understand and speak Turkish. For me, comprehensible input began Saturday mornings with Dora the Explorer and my two kids.

High quality comprehensible input can come from nearly any source, but the main idea is that you should be able to understand the message behind the sounds. Not every detail, not every grammatical function or even every word, but the message behind the sounds you are hearing. In the early days on the bus in Istanbul, I would routinely hear Turks say phrases that caused the driver to stop the bus and allow them to get off. I didn’t understand what was happening grammatically in the phrase “musait bir yerde inebilirmiyim” for some time after I began using it.

I had rather made a direct connection between a phrase and it’s meaning. I had acquired the language rather than learning a word for word translation. And acquisition will always be deeper, more meaningful and longer lasting than learning. 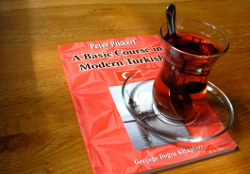 While working to get massive amounts of comprehensible input was the back bone of my journey to learn Turkish, I also used a number of different text book type of resources to help fill in the gaps, gain understanding and get much needed practice with the new concepts I was learning.

My favorite for Turkish as a beginner was the Teach Yourself Turkish book. I worked through the sixteen chapters over the course of about seven months, giving myself plenty of time to camp out in each of the new concepts and practice using them.

Another great resource is Peter Pikkert’s A Basic Course in Modern Turkish. This is a simple grammar text with no exercises or dialogues, just explanations and examples. It is simple and to the point.

There is not one thing anyone can do to master another language.

Each day as I was learning Turkish I tried to listen a lot, to read, to write, to speak with others and in the course of conversation, to listen as well. I used flashcards, a pocket dictionary, my ipod, a text book, I journaled daily and used a host of activities and tools to help me gain access to Turkish out in the community.

It was a well rounded personal program for learning the language and it worked.

You Should Learn Turkish Too

Turkish is spoken by over 70 million people. Turkey is also a rising economic and political power whose influence is growing throughout the world.

If that isn’t reason enough to start learning it today, Turkey itself is a beautiful country filled with immense cultural heritage and tremendous natural beauty.

Book yourself a ticket and begin learning Turkish today.

Here’s a short video that Aaron made in Turkish a while back for one of the The Mezzofanti Guild language challenges. 🙂