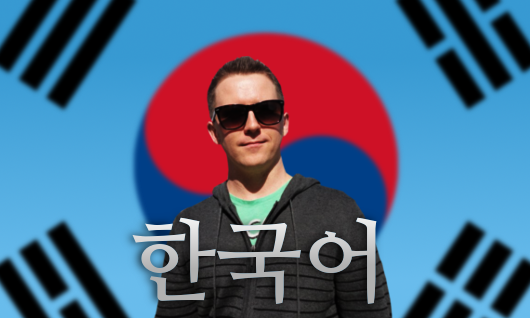 In less than 2 days I’ll be boarding a plane to what will be likely be my new home and travel base for the next 12 months – South Korea.

This is a country I’ve never stepped foot in and a language that is unrelated to any that I’ve ever studied so I’m really excited to take up this challenge!

Even though I announced my intention to start learning Korean a few months back, I haven’t given it a lot of time because I’ve been really focused on Irish so even though I can read the alphabet and know how to say a few basic things I am pretty much starting from the beginning with this one.

Of course I’ll be sharing a lot over the coming months here about the Korean language and culture, my progress and plenty of interesting HD video too.

UPDATE: I succeeded in my mission to learn Korean after less than a year. See here.

Where in Korea am I going?

When I wrote about getting the most out of an immersion trip before, I talked about how it’s a good idea to avoid major metropolitan areas if you want to really better your language learning experience. Stick to smaller places where the locals find you to be more intriguing and are less likely to speak your native language fluently.

I love visiting those places but living mid to long term in a concrete chicken cage packed into a densely populated metropolis would never be my ideal and my experience tells me that building good relationships with the local community is far less likely to happen there.

I’m heading to a small town called Gumi, right near the center of the country in the Gyeongsangbuk province (about half an hour out of Daegu).

It’s not a village by any means though as the population is around 400,000 (I’ve lived in smaller places like Rustavi, Georgia which had a population of 120,000 and El-Fashn in Egypt with only 60,000) but it’s small enough and the central location means that cities like Busan, Daegu and Seoul aren’t too far away.

I’ll be moving into my new apartment there this weekend if all goes according to plan and will be shopping around for a new motorbike or scooter so I can move around a lot easier. 🙂

How I intend to tackle the Korean language

The number one complaint I’ve heard about Korean from other learners is that its grammar is very tough.

Korean’s an agglutinative language with a very different word order to English and an honorifics system that tends to worry a lot of people.

The FSI (Foreign Service Institute) places Korean in its “superhard” category along with Arabic, Mandarin and Japanese for native English speakers.

I don’t place a lot of faith in FSI however because as I’ve already pointed out, its categorization of Arabic is absurd (UPDATE: Korean is way easier than I thought).

From what I’ve seen so far, the Korean alphabet is as logical and straightforward as the Arabic script is so this categorization surely can’t be based on reading difficulty alone. I’m sure that Korean grammar would be a mammoth challenge for people to overcome but this is only going to be the case for people who actually take a grammar-based approach to learning a foreign language in the first place.

Grammar study is entirely unnecessary in the early stages and in fact I’m convinced that it’s the worst thing you can do if all you want is to learn how to become conversationally fluent.

I’ve just demonstrated success with Irish in only 10 months of learning at home (despite minimal practice) having never really studied its grammar at all (in fact the only time I did study grammar was two weeks ago at an immersion course in Ireland where I had no choice).

My approach to Korean will be no different.

Rather than sit around pulling my hair out over speech levels, complex grammar rules, memorizing lists and making little progress toward conversational fluency, I’ll be tackling Korean the same way I’ve tackled Irish over the last year but this time I expect to make much faster progress for the obvious reason that I’ll be able to step outside my front door and practice whenever I want to.

I’m sure that a few veterans of the Korean language and critics will raise the issue of the honorifics system (the various degrees of formality depending on the social status of the subject). I don’t doubt that it’s difficult for learners.

I’ll talk in detail about this soon but for now my response (as with any language) is simply:

2. You’re obviously a foreigner learning the language so peoples’ tolerance for your formality errors is always going to be much higher than it would be for a native speaker regardless of where you are in the world.

I’ll be making regular updates both here and on the Facebook page about the Korean language (with video) and as always I’d love to hear any experienced input and advice from people.

If you’ve got suggestions on books, films, places, people, etc. that I should check out or review, fire off an email to me or share it in the comments section below.

To be honest, I haven’t got a lot to say about resources at this stage as I deliberately held off on buying books to avoid weighing my luggage down.

Quite a few people have suggested the Sogang series which apparently has less of a grammar focus so that will be the first one I check out.

The only book I have armed myself with at this stage is Essential Korean – Speak Korean With Confidence which is the clearest, most detailed phrasebook I’ve managed to find so far (it cost me $9).

I’ve become a fan of the website Talk To Me In Korean which is a phenomenally good, free resource run by fellow polyglot, Hyunwoo Sun. I’m hoping to meet up with him and the others at the LanguageCast polyglot meetups in Seoul and Busan while I’m there to learn more about the great work they’ve been doing.

Any further suggestions of excellent quality Korean resources would be most welcome. 🙂

Other huge language goals for my time in Korea

The next 6-12 months will be absolutely critical for my Arabic as I need to sit an advanced level exam when I get back to Australia (my employability actually depends on this). I’ll be taking regular time out over the coming months to invest heavily into polishing up my Arabic skills (mainly MSA but also acquiring a lot more dialect vocabulary).

If any of you reading this know of an Arabic-speaking community in South Korea (I’m sure there is such a thing!) let me know. 🙂

As I’m hoping to make it back to the Gaeltacht next year, I’ll be working hard on my Irish as well while in Korea through regular Skype lessons and chatting with friends.

I’d like to at least be ready to sit a B2 exam for Irish so I’ll continue to improve as much as possible for that (although I don’t think the next available exam date for me will be until January 2014 so I’ve got more than enough time :)).

I’ll also be taking occasional time out to work on my Georgian and French, hopefully getting in some good practice at the LanguageCast meetups I mentioned above.

As for other East Asian languages (particularly my dormant, abandoned Mandarin), we’ll see what opportunities arise over the coming 12 months.

Any suggestions on Korean bands of this style are also welcome 🙂