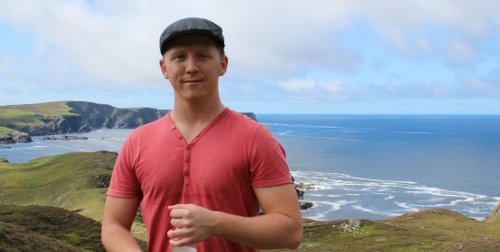 Here’s a quick update on what’s been happening on my trip to the Gaeltacht (one of the areas of Ireland where the Irish language is spoken) so far.

I’ve been in Gleann Cholm Cille, Co. Donegal for a week now and spent the first three days hiking the hills and enjoying the gorgeous landscape here while getting to know the other students and faculty at Oideas Gael.

My own course started on Sunday and will go till Friday with classes going through the day and cultural activities such as traditional dancing, singing (in Irish) and most importantly, plenty of drinking in the evenings.

This particular course that I’m on attracts some really interesting people from all over Ireland and the rest of the world. You’d never expect to see so many people from places like Russia, Japan, Italy and even Australia of all places here taking such a keen interest in Irish! 😉 It’s a real eye-opener into just how alive the language actually is.

Plenty of high profile people come here to do this course as well and I’ve been fortunate enough to spend time this week with one of my favourite actresses from Irish television (in fact one of my favourite characters from Rásaí na Gaillamhe – a show that I’ve been using as a learning tool for the last few months) and the Minister for Tourism last week who were both here for the same course.

I’ll write up a detailed review of the school I’m at when the week’s over and I’m putting together some video footage that’ll hopefully pursuade other learners to venture out here as well.

Keep checking back for that!

UPDATE: Read the end result of this trip here.

Language is much more than just input and output

I’ve been confronted by something crucially important over the last few days.

If you’re an experienced language learner then you’ve no doubt been in that frustrating situation where you feel like you’re at a very high level, you head off on a trip somewhere to use the language and then when a native speaker asks you a basic question it throws you completely off guard making you feel like you actually don’t know as much as you thought you did.

It might be something as simple as how are you? – you know it perfectly well and you know how to answer it but you seem to forget everything for a brief moment – er… um… I’m good… emm… er… and you?

When I first arrived here in the Gaeltacht last week I had a delayed response to pretty much everything that was said to me in a target language that I was supposed to be quite good at by now.

Here I was understanding television shows and reading books yet a simple greeting had me stumped!

Talk about massive blow to the ego.

Now, as frustrating as it was it actually wasn’t an entirely new experience for me – I’ve been in a similar situation several times before with other languages but this time I decided to pay close attention to it.

It was worse with Irish because with other languages I’ve always had people in Australia or online to practice with in the early stages but all this Gaeilge practice is very new to me so it’s a giant struggle.

It’s all part of the process of turning a very strong passive knowledge into an active skill.

Exchange is a vital aspect overlooked

Without other human beings you can’t beat the fluency mark.

It’s bad news for people who like to fly solo but you can never really claim to be properly fluent in a language until you’re managing to exchange discourse with another person or people.

I can hear you all saying well duh! but hear me out for a second 🙂

We use language to get a desired outcome, whether it be requesting something, expressing thoughts or feelings, making a demand, etc. and although you can theoretically learn a language in isolation (sometimes with minority, endangered or dead languages you have no choice after all), there eventually comes a time where fluency will only come when you’re face-to-face with another speaker.

Here’s an analogy for you:

No professional baseball player ever became a pro just by tossing the ball to himself in the backyard.

I know it’s not a great analogy and it sounds like simple common sense (you might be thinking no shit!) but I don’t believe a lot of people fully understand this until they’ve been in the situation themselves.

Only by having unpredictable questions and statements thrown at us again and again, having to think on our feet and respond appropriately does our competency change dramatically (not to mention the benefits of error correction and so on that come as well).

I’m happy to say that all of the passive knowledge I’ve built up over the last 8 months is activating rapidly but to really get to the level that I want I’ll need to spend more time here in the Gaeltacht.

I’ll be heading to another Gaeltacht area on Saturday for two days before I head off to Dublin and then back home to Australia (then immediately off to South Korea *phew*).

Keep checking back as I’ll have some video (with a 9 month progress video to come), a detailed review of the course to share and plenty to say on the Irish language itself (since I received quite a few messages and emails asking me about it).