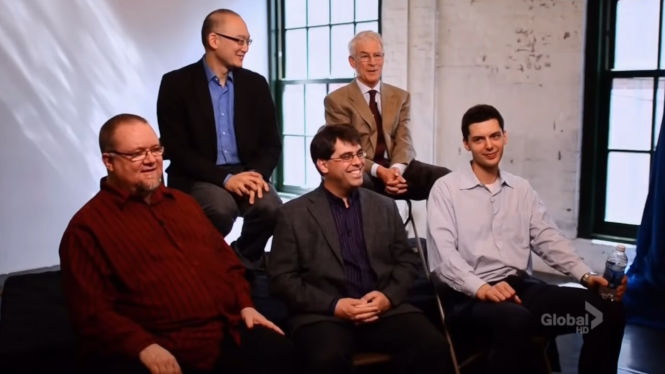 If you haven’t already seen this, there was a very interesting segment called Word Play on the Canadian TV ‘current affairs’ show 16×9 – The Bigger Picture a while back.

It took a close look at hyperpolyglots (a fancy word for polyglots who speak dozens of languages) and the question of whether or not their brains work differently to other people came up.

Do their genes enable them to learn multiple languages with apparent ease?

The relation of the Geschwind-Galaburda Hypothesis to language learning

The thing that really fascinated me in the Word Play segment was the plausibility of the Geschwind-Galaburda hypothesis (which Erard talked about in his book).

According to the report, most of these exceptional language learners tend to have the following characteristics:

I suppose I should make it clear that I’m not necessarily taking sides by suggesting that males perform better at languages than women.

These are the views shared in the segment.

These days it’s risky to even ask some questions. 🙂

I personally do not believe that successful language learners are the product of special ‘genes’.

Everybody with an L1 is perfectly capable of learning an L2 (or more).

In fact, I’ve encountered some incredibly talented women in my travels who speak more languages than I do.

However, as a linguist who has spent time studying Second Language Acquisition there are always a multitude of factors that should be taken into consideration and examined when dealing with extraordinary cases of language learning (whether it’s ‘hyperpolyglots’ or adult learners achieving near-native fluency in one other language).

To say that the men in the picture above ‘just worked harder’ is a pathetic oversimplification of the issue.

I’m not arguing that special genes are the cause but my point is to say that it definitely warrants research and this includes affording linguists (those horrible academics who have never lived in the real world or learned another language *eye roll*) the opportunity (and respect) to do things like study the brain.

I’m fascinated by the plausibility of things like the Geschwind-Galaburda hypothesis (and other genetic studies), not because I’m arguing in favor of it, but because it’s one of many avenues of research examined to explain a very extraordinary phenomenon.

“They worked hard” is lazy (see some of the comments below).

Are you a polyglot or hyperpolyglot?

Can you relate to any or all of the “cluster” of attributes mentioned here (autoimmune weakness, left-handedness, etc.)?

I’d like to hear your thoughts on the questions raised by this segment in the comments section below.