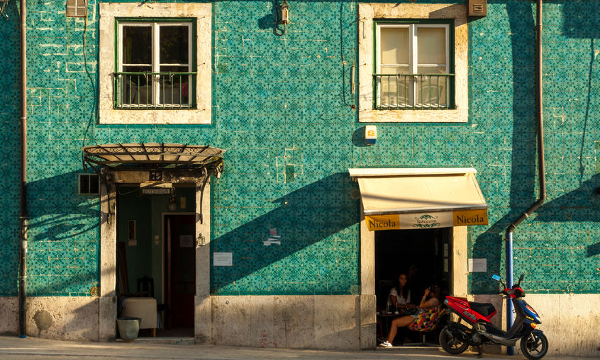 Today we have a guest post from Lucia Leite who runs a blog called Lingholic.

Lucia’s from Portugal herself and in this post she’ll share some interesting info on some of the differences between the Portuguese varieties spoken in Portugal and Brazil.

Over to you, Lucia.

Portuguese and Brazilians do not agree on many things and their conversations are always full of discussions.

For example, who makes the best feijoada (a black bean and pork dish) or if brigadeiro is better than Portuguese custard tarts (come on guys, just try them both! They are delicious). However, there’s one thing the residents of both countries agree on; the Portuguese spoken in Brazil is completely different from the one spoken in Portugal.

Many Portuguese learners freak out when they start noticing those differences.

Some of them even wonder if they will be able to communicate in both countries after years of a language course. It might sound scary and it will be at first sight but once you get used to the differences, the understanding will be much easier.

Though Brazil and Portugal share the greater part of the language, there are many variations in both spoken and written.

Those variations can be found in many other languages, such as Spanish and English, but in Portuguese they reach a higher level.

Can Portuguese and Brazilians understand each other?

This is one of the most common questions made by any Portuguese learner.

The first thing to point out is that despite all the differences, there is no doubt that most Portuguese and Brazilians understand each other well.

While some Brazilians still find it a bit hard to understand the Portuguese spoken in Portugal, Portuguese people are used to the Brazilian accent due to exposure through Brazilian soap operas (who does not love them?), which are really popular in Portugal.

Another very common question is how the Brazilian Portuguese became so different from the one from Portugal and why the same thing did not happen with other Portuguese speaking countries spread around the world.

There is a concept created by the American linguist Albert Marckwardt called Colonial Lag that explains for some people how the Portuguese spoken in Brazil and the one spoken in Portugal have become so different over time.

Colonial Lag is the hypothesis that colonial varieties of a language (such as Brazilian Portuguese) change less than the variety spoken in the mother country (Portugal).

It is often said that colonies follow the linguistic advances of the mother country with some delay especially because of the geographical distance.

Portuguese was established as the official language in Brazil only in 1758, even though the colonization started in the 16th century. By that time, the contact with the indigenous people and slaves had changed the spoken Portuguese in Brazil.

In the XIX century, some more changes occurred in the language due to the contact with European and Asian immigrants.

The other countries that were colonized by Portugal speak a Portuguese more similar to the mother language.

There are two main explanations for that: the first one is that since most of them are African countries, they did not have much external contact from other cultures that could have adapted their way to speak. The second reason is that compared to Brazil, those countries reached their independence much later (Angola became independent in 1975) and therefore they had much more contact with Portugal and its people during their historical development.

Now that you know how the Brazilian Portuguese became so different from the Portuguese from Portugal, let’s look at these differences and how to notice them.

Differences in the pronunciation between the Portuguese varieties

Perhaps pronunciation is the main difference between the languages spoken in both countries.

Let’s use the word dois (two) as an example.

There are still many other differences even in these regions.

The main difference lies in the pronunciation of vowels or more specifically how Portuguese people eliminate the unstressed vowel between consonants of a word when they speak.

For example, the word padaria (bakery). In Brazil it would be pronounced just how it is written but in Portugal, this word sounds more like pad’ria.

The last but not least important difference in the pronunciation of words is the T’s and D’s.

In Portugal those consonants are pronounced always in the same way but in Brazil, when followed by an i or an e, change their sound to G and Chi respectively. For example the word dia (day) and tapete (rug), when pronounced by Brazilians, sound like gia and tapeche.

The pronoun você is used in Brazil in both informal and formal contexts.

Verbs to be used with cocê must be conjugated in the 3rd person singular and it is the most common word that Brazilians use to address someone. In Portugal, você is a formal way to address someone that you do not have much contact with.

Tu is the pronoun used in Portugal in an informal context, exclusively for friends, family and casual situations.

In the south of Brazil, the conjugation is according to the Portuguese from Portugal but in the northeast, both pronouns tu and você are always conjugated in the 3rd person of the singular.

You can hear an example below:

Gerund? Not in Portugal

If there is something that Brazilians love about Portuguese grammar, it is the gerund.

All the verb tense rules are forgotten, the only thing that matters is to insert a gerund into a sentence in the past, present or future. In Portugal, the gerund has been considered unusual for decades and instead of that, they simple use a + infinitive of the verb.

Let’s see an example below:

In Brazil it is also possible to use the infinitive but never how Portuguese people use it.

For this alternative, Brazilians will just say:

Brazil: Eu falo com Maria sobre o trabalho (I am talking to Maria about the work)

Brazilians are not just creative in football or in carnival; they are also creative in their language.

It is common to hear in Brazil nouns that suddenly become verbs. For example let’s use the Portuguese phrase dar os parabéns (to congratulate). In Brazil, this phrase would simple become a verb called parabenizar.

American words such as brainstorm, media and etc. already belong to the daily communication of the people in Brazil.

Brazilians and Portuguese use quite different vocabulary that makes it harder for them to understand each other.

Sometimes those differences can generate an awkward situation.

For example the word bicha.

Bicha in Portugal means fila (line) but in Brazil the same word is a pejorative term for homosexuals. Another word that can bring some strange moments is the word propina.

For that reason, we are going to leave some examples of words that mean the same but are pronounced different:

We hope this article helped you in understanding some differences between the Brazilian Portuguese and the European one.

Portuguese is a fantastic and rich language and despite all the differences that we are showing here, Portuguese and Brazilians can still communicate with each other.