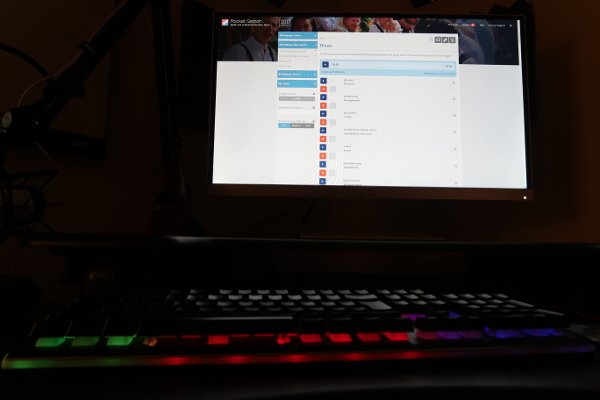 I announced not too long ago that after doing some ancestry research on my family and finding strong links to Germany, my interest in learning the German language really piqued.

Learning German quickly became important and personal to me knowing my family’s history.

So naturally, I started to look into the best resources for learning German. There’s not a whole lot available unfortunately but the one that really stuck out to me was Rocket German.

Rocket German describes itself as a market leader and has been around for over 15 years now.

Like most of the different language editions available, Rocket German has 3 levels/tiers of difficulty which are sold as ‘Premium’, ‘Combo’ and ‘Works’ packages respectively. There’s a fairly substantial difference in the amount of content between the different packages too – ‘Premium’ offers only 64 lessons whereas the ‘Works’ package has a total of 190 lessons.

Although it comes with a higher price tag, I found that the best and most interesting content is in the higher tiers.

I spoke to the CEO of Rocket German and asked for full access to examine the quality and method of all three levels of the course which I’ve shared with you below. Here you’ll find points where I think Rocket does an excellent job and points where I believe it needs serious improvement.

Also before you read on, here’s a video demo I made a while back of the French, Spanish and Arabic versions. The 2020 edition has several significant improvements since: 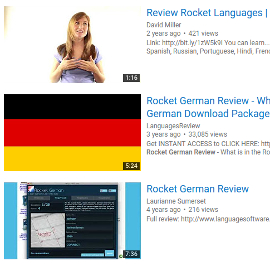 I need to get one thing out of the way first.

Before you landed here on this page, you may have looked around for a sound review of Rocket German and had to sift through a frustrating pile of fake reviews and videos on YouTube.

Rocket German has a sizeable commission scheme in place that attracts a lot of disingenuous profiteers. They spam people with links to Rocket German which has (in my opinion) caused major damage to the reputation of the company.

In fact, it’s so bad that I avoided reviewing the course for a long time.

But what I can assure you of after using it myself and speaking with the CEO is that Rocket German is not in any way connected to abusive marketers and profiteers.

I personally wish they’d find a way to stop people from doing it as it makes it difficult for consumers to find reliable information.

Just be aware of it and make sure you’re not being taken advantage of.

As soon as you log in to Rocket German, you see that each tier is comprised of four main sections: 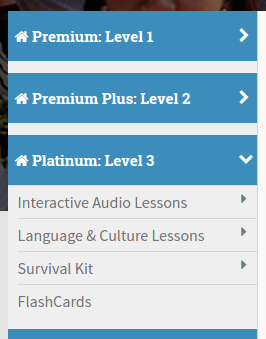 These are lessons on grammar and aspects of German culture.

Here you’ll get to listen to podcast-style lessons (casual chat) on German hosted by Sarah and two native German speakers, Sandra and Matthias.

These are survival and core phrases/expressions needed to get by in Germany.

An in-built flashcard app where you can add vocab and expressions from anywhere in the course to be studied later on.

The interface is simple and clutter-free; you have dialogues and expressions, download links for audio and lesson notes, and all lessons are followed up with exercises to test you (writing, pronunciation and listening comprehension).

As you complete each lesson and testing component, the program marks it as complete.

Unlike other competitor courses (e.g. RS and Pimsleur), the Rocket lessons are presented in a humorous way and they don’t follow a ‘cookie-cutter’ approach (meaning that the lessons in Rocket German are very different to those in every language edition).

Sarah, the lesson host, is very engaging and fun to listen to as she talks with the native German speakers.

Rating the comprehensiveness, clarity and overall quality of Rocket German

As I mentioned above, Rocket German provides a staggering 190 lessons (in the ‘Works’ package).

For the average person learning German, this is a lot.

It’s potentially years worth of material to work through or at least many months for motivated learners. In terms of the scope of its content and overall comprehensiveness, there doesn’t seem to be any comparison to a competitor like Rosetta Stone whose lesson scope is minimal.

Throughout the Rocket German course, you’ll find naturally spoken dialogues on all kinds of topics such as sport, literature, politics, German culture, relationships, business and more, making it suitable for an array of learner types.

The scenarios are just as you’d find them on the streets in Germany – something that’s not typically found in other German programs.

Content difficulty ranges from absolute beginner level through to advanced in the highest tier and all lessons come with 100% natural audio recordings to improve listening comprehension.

One of the biggest criticisms I have of Rocket German off the bat is the forum/community section.

Like some of the other Rocket editions, it’s very inactive, meaning that while there are thousands of members, very few of them bother using the forum to communicate with other members.

Community’s very important for learning a language (for practice, motivation and to seek help) but the Rocket German forum just doesn’t seem to be popular.

I took a look and found some questions getting responded to many months after they were asked.

Now, it’s probably just a case of members not wanting to use it and preferring to work alone but I think it’s unfortunate that the community aspect is not taken advantage of.

Perhaps this is something that Rocket German can improve on – getting members more engaged with each other and fostering a better community experience.

What do you mean it “shouldn’t be free”? 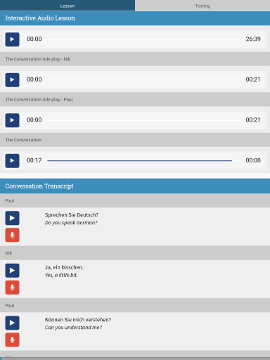 I’m not complaining that it’s free by any means! 🙂

I say it shouldn’t be free because it’s such a great app that works flawlessly on all mobile devices and yet Rocket doesn’t charge for it – it’s a part of the membership.

The Android app which I use on my Samsung tablet (also the iOS version on my wife’s iPhone) is a joy to use and I can access all the same lesson content in Rocket German and all other language editions that I’m subscribed to with a few swipes.

This makes it super convenient to study German during commutes or while I’m out waiting somewhere trying to squeeze in a few minutes of extra study.

If you do end up using Rocket German, I highly recommend downloading the app as well.

Rocket German downloadable content, leaderboard and the ‘My Vocab’ tool

One of the best and most underrated features of Rocket German is that you can download everything.

It seems odd to point this out but with many programs (especially nowadays with the rise of subscription-based learning products) you don’t actually own what you pay for.

For example, if you sign up to Rosetta Stone’s online courses, you get limited access and for a limited time. After that time is up, you’re shut out and have to pay again.

You also can’t download the audio to load into a portable listening device or print out the lesson content.

With Rocket German, you have the option on every lesson to download printable lesson notes and to download the full, high quality MP3 files. 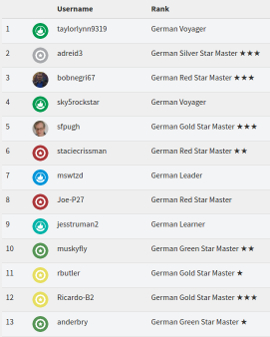 In addition to this, there are two other great little features:

This makes it possible to earn points and compete with other members as you progress. It’s a great little extrinsic motivator to keep you coming back and learning – to help on days where you lose motivation.

I love this feature as it’s a high-powered search tool that allows you to look for any word, collocation or phrase in the entire course. The search results display the word in context along with the audio and a button to add it to the flashcard deck so you can review it later.

Until its most recent edition, Rocket German was miles behind its competitors in voice recognition capabilities.

Other programs like Rosetta Stone had for quite some time employed a fairly accurate form of automatic voice recognition for pronunciation checking. This was one of the few features that made RS as popular as it is.

Rocket German has now taken advantage of Google’s own ‘web speech’ technology to accurately compare voice recordings on the fly.

I’ve used this feature in a number of different languages including German and found it to be the most accurate I’ve seen anywhere (though of course not perfect).

At the end of the day, I’d much prefer and recommend using a partner or tutor on italki for pronunciation practice but this is the next best thing if you’re unable to do that.

Overall: Is Rocket German worth it?

Rocket German could do with a more engaging community, less spammy marketers and other minor improvements (e.g. more images and video would be nice).

But overall the comprehensive scope of its content (a whopping 190 lessons), 100% natural German dialogue, an outstanding mobile app, Google Web Speech technology and other excellent features make it well worth the price.

The price does seem a little high but considering that you’ll potentially get many months or even years out of the program, it’s worth it in my opinion.

You can test out Rocket German or sign up here:

Used Rocket German before? Let us know what you think below!