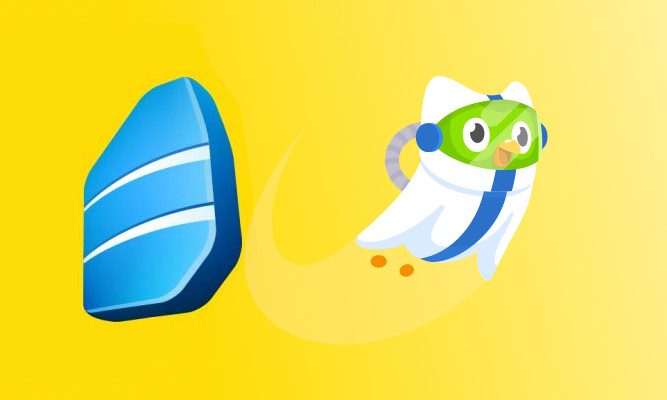 Is Duolingo better than Rosetta Stone? (or vice-versa?)

I was honestly inclined not to write this post today (because it really is like comparing apples to oranges!) but since so many people ask about it, I thought I’d take some time to put the matter to rest.

While I’ve written at length in the past about Rosetta Stone’s method, I’ve actually said little about Duolingo (keep reading and I’ll explain why).

Both platforms have had huge success in their own ways and many imitator products have spawned off them over the last few years.

First of all, let me summarize how they differ (based on their own claims):

I don’t represent or earn from either of these companies.

Both of them have strengths and weaknesses in different areas but I definitely have a personal preference between the two which I’ll explain in a moment.

Is this your first time here?

If you love languages and language learning, make sure to sign up to The Guild (free) at the bottom of this page.

RS and Duolingo: Buying a product vs BEING the product

My assumption is that anyone looking for a comparison between Duolingo and Rosetta Stone are doing so for one main reason:

So if Duolingo produces better results then why not take a completely free product over something you need to pay for, right? Makes sense?

I’m going to say something really unpopular and fairly controversial here (that you probably weren’t aware of).

With Duolingo, YOU are the product.

By using their “free” software and doing their fill-in-the-blank exercises, you are actually submitting translations that are then sold to major corporations.

In fact, the guy behind Duolingo (Luis Von Ahn) previously worked on Re-CAPTCHA.

You know that annoying image pop-up on registration/login forms that gives you an image of a sign and asks you to verify by typing in what it says? That answer you type in actually gets sold – you’re basically translating something for them for free.

So this same principle is used on Duolingo.

What appears to be a completely free web app for learning languages is really just a front for crowd-sourced translation (why pay a translation company when they can just get ignorant consumers to do it for them?).

Nothing is ever free.

Rosetta Stone on the other hand is obviously a paid product.

When I initially reviewed RS years ago, I talked about its grotesque price tag and it really was notorious for being expensive. You’d pay several hundred dollars to buy a boxed package.

Thing have completely changed over the past 2 – 3 years.

With the massive rising popularity of subscription-based course platforms, RS was basically forced to change their pricing structure and offer an online subscription service (SaaS) at a fraction of the original cost.

Now, you might not consider Duolingo’s business model to be unethical or problematic in any way. That’s fine.

After all, they’re offering you a service (learn languages) in exchange for your service (translation).

But for someone like me, I would rather pay directly and knowingly for a service that is built solely for the purpose of teaching languages, rather than a company that’s taking my work and selling it to God-knows-who for God-knows-how-much.

It’d be like a teacher taking a student’s finished exam and selling the student’s exam answers to a third party without the knowledge of the student.

UPDATE: They recently introduced a Duolingo Plus option for about $7 a month that removes ads and allows for offline learning, but it seems you’re still giving them your translations which they’ll sell and profit on.

I’ve seen some reports around that Duolingo moved away from their crowd-sourced translation model (meaning they’d rely mostly on volunteers and donations) but nothing solid to confirm that yet.

Duolingo and the infantilization of language education

I recently wrote an article about the notable trend of infantilization in language app UI’s.

In fact, it’s not just language apps but a general “dumbing down” of education and attention spans everywhere.

Compare course content and delivery from 10 years ago to the products being sold today and you’ll notice something striking – consumers in 2019 are treated more and more like adult children.

Duolingo has a UI that looks like a child’s toy with cartoon awards, noises and it is completely non-intimidating by design.

The entire course experience is based on giving the user a false sense of progression as they click through to win their achievements and keep up learning streaks.

One of the criticisms of Rosetta Stone on the other hand that you hear quite often is that it’s “not fun”.

But I wonder if that means that RS is legitimately challenging as an adult learning platform that doesn’t treat its customer base like children?

Nearly every majorly critical review of Rosetta Stone comes back to one thing:

“How am I supposed to know what they’re saying if I don’t know the grammar?”

Criticism is almost entirely due to impatience.

The point I’ve made repeatedly in the past is that the RS method is actually enormously effective IF you allow it to be. While I don’t believe you can mimic a true immersion experience with a piece of software, I still think RS does a pretty decent job of leading you through a quasi-natural process of exposure and intuition-based learning.

No explicit grammar instruction is a huge plus too (you don’t need to study grammar to learn to speak a foreign language).

Your comprehension builds over time but it takes actual work on your part to let that happen.

I mentioned in my review that the first time you encounter various scenarios in the software, you’ll be completely confused and not understand a thing. That’s intentional.

But through repetition and actually using your intuition as you would in real life, you start connecting the dots.

The problem is: we live in a Google culture where we expect immediate answers to all our questions.

This is where I think Duolingo earns more praise in the short-term from its users – you can rush through the entire course and never learn anything.

Duolingo wants you to feel gratified so you continue coming back for your streaks and giving them translation material to sell to third parties.

“I finished a Duolingo course. Now what do I do?”

You get to the end of your fill-in-the-blank progression and find that you’ve in fact learned very little and run out of direction.

One of the other chief complaints made about RS (and I talked about it at length in my review) is that it’s culturally inappropriate.

Some languages are worse than others in this regard.

What you’ll see throughout RS is that it takes images from an American context and applies them to a completely foreign scenario and language.

As I’ve said previously, this is not a major problem as it doesn’t necessarily change the meaning the conversation (two females are two females regardless of what context they’re in or their race).

However, in the case of the Korean edition for example, you also get situations where an old person is talking to a young person and using overly polite language that would never exist in the real world.

It’d be like an old man calling a teenager “sir”.

Duolingo doesn’t do this necessarily but its main problem (and something it’s routinely mocked for!) is that it uses absolutely bizarre sentence examples.

Just go on Google and search for: weird duolingo sentences

“Our cats are reading newspapers.”

“The dog and the cat converse in Korean.”

“She received a wish for each nut.”

These are the kinds of pointless absurdities that Duolingo will have you translate.

While it can still be said that you’re learning vocab and grammar by translating this, dialogues like this have zero practical usage in the real world.

If you’re looking for a one-stop solution to your language learning goals then you’re going to be very disappointed no what matter product you choose to use.

Language courses and books are only supplements.

The real classroom is outside where you interact with other human beings and learn through constant mistakes.

I’ve talked about how social risk-takers are always the best language learners – they learn languages better than anyone else because they’re out with people and not afraid to embarrass themselves.

Of course, you can’t always have these physical opportunities depending on where you live but platforms like italki have certainly made this easier.

The important point I want to highlight here is that whether you’re using Duolingo or Rosetta Stone or something else entirely, you should not be relying on the tool alone to get you to where you want to be.

I see this a lot on our Arabic site where people will often come and ask:

“What level will this get me to?”

It’s impossible to answer because it always depends on the learner’s own determination and practice with other people.

Duolingo and RS are not even remotely similar.

As I said above, I don’t know why people frequently ask for a comparison of the two other than prospective RS customers looking for a cheaper/free alternative in Duolingo.

On an ethical level, I can’t stand the thought of providing free translations to a company that will go on to sell them to a major corporation. I feel the same way about Re-CAPTCHA and hate having to use it to log in to a service online.

If I can’t be part of the transaction process, I’m just not comfortable with it at all (this coming from a guy who is paranoid about Internet privacy).

That aside, I also just find Duolingo’s childish gamification to be indicative of a massive downward trend in education quality. It’s not just the way companies are treating consumers – sadly it’s what consumers want.

RS, for all its faults and cost, still provides one of the only truly unique language methodologies on the market.

It’s also one of the few methodologies that correctly stays away from explicit grammar instruction in favor of a more intuition-based teaching style.

For a far more detailed explanation of Rosetta Stone (including criticisms of its method), see my review of it here.