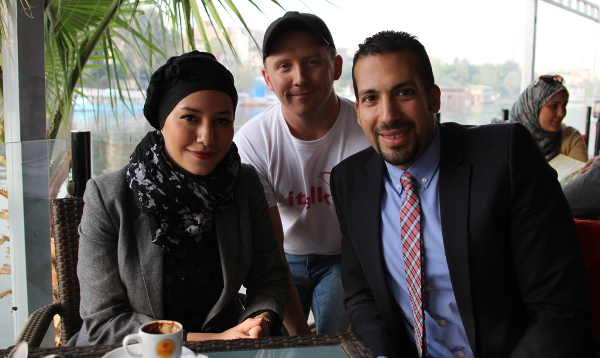 One criticism I often get from people is that my language learning results come down to my ability to travel so much.

My last post was about ‘why Russian isn’t that difficult‘ and as always, some of the responses I received were along the lines of:

“Yes, but we can’t all move to the country like you can.”

I have a few points to make regarding this.

You can live in the target language country for years – decades even – and not actually be immersed in the language ever.

It’s a daily choice that you have to make to put yourself in the right places and be actively using the language (most days it can feel like a total grind believe me). In a lot of places overseas this is an easy thing to avoid.

In many parts of the world that I’ve lived (e.g. Russia, Korea, Italy, the Middle East), I’ve had a normal job and other commitments while learning the language. Often these jobs have been even more time-consuming than a normal job back home (leaving me less time than I would normally have to actually study).

I’ve had to go out of my way to find time for language learning.

But I’ve still made the time for it and reaped the results.

Being in the country helps immensely no doubt in terms opportunity and availability but only if you make a daily effort on your part.

One hour of conversation is just not comparable to authentic immersion

It hit me last week that lately I’ve really not been devoting an equal (or even sufficient) amount of time to the languages I care most about.

There are 4 languages that I currently want to maintain at a consistently high level: Arabic, Russian, Korean and Irish.

But I’m actually stuck in the US for at least a few months until my green card gets approved (can’t travel till it’s granted! :().

So I thought to myself, “Ok, I need to work out a proper, weekly schedule for using these languages so that each one is getting enough speaking time.” At first, I had planned to take a one hour italki lesson each morning with a different language.

But after some consideration, I worked out that this would not be a wise or productive use of my time.

Here’s what I realized:

In every case, I succeeded with languages because I was using them for extended periods at a time (i.e. most of the day).

One hour of immersion is just not comparable (an hour is more like a warm-up period).

So what I’ve decided to do as a new experiment of sorts is to actually set aside entire days for each language and aim to converse online in the language for 5-6 hours each day.

That’s 5-6 hours of speaking – not studying.

This sounds heavy and stressful but let me explain what it means and why it’s important.

Between 8am and about 3pm, I’m setting the following schedule this next month per language:

These are face-to-face, challenging conversation sessions.

Not study, reading or watching foreign films – these are 5 hours of constant interaction, fumbling and making mistakes with other human beings in a foreign language (with short breaks in between).

The more mistakes the merrier.

During this daily block, I’m only allowed to communicate in the target language at home.

Phone gets turned off. No Facebook. No emails. No English interaction at home unless absolutely necessary.

The only thing in front of me is my laptop, a glossary of terms and expressions to practice and expand as the teacher shows me new things, a translate tool or dictionary for on-the-fly words when I get stuck and something to take notes on.

This is all done over Skype with various language tutors online (mostly through italki) and only one language for the entire day (i.e. 5-6 hours of Russian conversation only).

My aim here is to emulate as much as possible at home the amount of interaction I typically receive living overseas.

One hour a day is not enough to achieve the usual results I have when I move abroad.

What these Skype language sessions will consist of

Here’s where planning and being strategic is a must.

It’d be very easy to start running out of mental fuel by the second or third lesson with this approach (foreign language conversation can be very draining!) so I’m having to sit down and plan this out properly.

First of all, where possible I’m going to make sure to use a variety of teachers and conversation partners. This will both keep it interesting for me and ensure that I don’t spend 5 exhausting hours talking to the same person.

In one whole day, I’ll be improving my conversational skills on one topic only.

Yes – one discussion topic for the whole day.

This could be anything practically useful to me as long as it’s new (e.g. my work, politics, family, buying vegetables at the market, changing light bulbs etc.).

As long as it’s new content and challenging to my level.

Grammar will be learned implicitly (no explicit teaching or drills) – only in context as it relates to the topic of conversation.

I’ll test myself on previous lessons by attempting to use what I’ve learned with the next person I talk to (who will be unaware of what I’ve just covered with the previous teacher).

If you’ve been following me for a long time, you’ll know that part of my immersion approach is to focus on a single topic or feature of the language and spend solid bursts on it until I know it very well before moving on to the next.

This has always proven the best strategy for me.

For example, if I spend an entire day just focused on improving my conversation skills on the topic of dogs then by the end of the day I expect to be able to hold pretty detailed conversations on describing dogs and breeds, what they do, what they look like and so on.

Master a topic then move on to the next.

Doing this forces me to learn a whole lot of topic-specific vocabulary and expressions that I otherwise probably wouldn’t.

Most importantly: I’m able to clearly see my progression because I can see how well I converse on a particular topic that I previously could not.

No matter how many hours I devote to this experiment, it still won’t measure up completely to being in-country.

There’s just so much contextual opportunity and so many cultural cues that you can’t experience over Skype (read this post where I explained this).

But let’s face it – it’s still the closest possible thing to actually being there.

What I want to prove by doing this (to myself mainly) is that effective/sufficient time and intentionality can be (mostly) emulated at home over Skype.

But one hour a day (or worse per week) is just not sufficient.

Does that mean I’m implying that in order to learn a language successfully, you need 5-6 hours of constant foreign language interaction a day?

But extended time periods of daily interaction are one of the main things that make overseas immersion so much more rapid and effective.

I’m looking forward to sharing my experience and results with you over the coming weeks!

The site I use for finding online tutors, conversation partners and teachers is italki and they’ve been super generous to offer a FREE language lesson to all my readers.

All you have to do is click here and sign up, buy one lesson and then they’ll give you a second lesson for free.