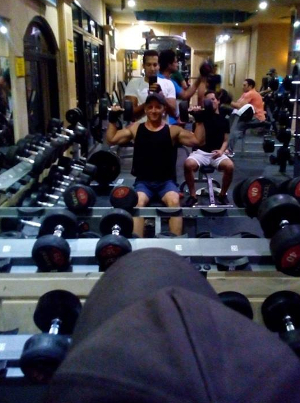 I find that the gym is one of the best places to meet new people and practice the language when I move to a new foreign country.

In all of these places joining the local gym has been one of the most rewarding things in making social connections and practicing my target languages.

When you’re in a small room full of people and you stand out as a foreigner, it’s only a matter of time before people start getting familiar with you and wanting to talk to you.

These last two years I’ve had a personal mission to drastically raise my health and fitness level and yesterday while I was training I thought about how the way I improved my training had a really positive effect on my language learning.

Here’s what’s made all the difference:

One thing I’ve really started to take seriously over the last year is focusing on strengthening minor and neglected muscles.

We tend to spend a lot of the time doing compound exercises for large muscle groups (e.g. presses, squats and so on) but there are smaller support muscles that get neglected over time and if not strengthened properly can lead to serious injuries later on.

For example I, like many other guys, avoided the adductors (inner thighs) like the plague (yes, a lot of blokes have it in their minds that it’s not for them :)) until I got an injury earlier this year while squatting. The same thing happened with my front delts (the front part of the shoulder) which I injured doing bench press.

Having minor support muscles that are weak is a recipe for disaster!

Since I started improving these support muscles, I’ve found that my overall strength and performance have gone up dramatically.

Basically things that aren’t really necessary for communication at all but when they all come together at the end they make me sound much much better when I speak.

They’re small features of the language that are super important for overall fluency.

Don’t underestimate the value of all those seemingly insignificant parts of the language.

2. Doing a session every day rather than just 3 days a week

I use to just train for 3 days a week (Monday, Wednesday and Friday).

It’s a fallacy that you need a rest day in between each training day.

Each of those 3 days focused on one or two muscle groups and I’d tack on a bit of ab work at the end of each day if I felt like it (usually half-arsed and tired at the end of a workout).

I saw no results doing this.

So I started to train 6 days a week instead (the seventh day being an active rest day) and muscles that were previously an afterthought (like abs) got their own day which means that once a week I spend 1-2 solid hours only training abs and nothing else.

The results have been astounding since I started doing this.

Lesson learned: You can’t improve much in a language by just having a lesson once or twice a week or studying occasionally.

You need to apply yourself diligently every day and just as you would focus on a different muscle every day in training, have plenty of variation in your learning approach throughout the week.

That way you’re covering as much as possible and not allowing yourself to get bored or too stuck in a mundane routine.

Language learning (like training) should be an every day thing.

As well as increasing the amount of days I put in, I increased the intensity of each session.

I made sure that every session was rigorous and exhausting.

So instead of having the mentality of ‘Well I’ve done my 3 sets on this exercise… now on to the next one…’, I’d push myself to the absolute limit on each exercise. This meant a combination of heavy and light weight workouts until the muscle I was focused on was completely fatigued and unable to go any further.

I didn’t allow myself to go home until I was completely finished.

Lesson learned: Make every learning session (no matter how short it is) as serious and thorough as possible.

Even if you only get 10 minutes to study or practice, treat it like it’s the most serious thing in the world at that time.

Block out all distractions and thoughts, and tell yourself that this is the most important next 10 minutes of your life.

Tell yourself that whatever happens in this brief study period or conversation, you’re going to come away speaking better than you did before.

4. Eating real food (and nothing else)

If it comes in a wrapper or packaging, I don’t consume it anymore.

Unless it’s just been pulled off a tree, plucked out of the ground or carved off a beast, then it’s not food.

Since I spend a lot of time sitting at a desk too, I don’t need much high energy food/sugar in my diet which only converts into fat when it’s not used.

So apart from the natural sugars I do eat before and immediately after I exercise, I’ve weened myself off it for the most part.

It’s amazing when you cut out sugars and crap from your diet how much more alive you feel and how much easier it is to stay in shape – even if you’re sitting down all day for work.

It’s true that in learning, poor quality input isn’t going to harm you like food will but it definitely won’t help you in the same way that good quality material will.

I make sure that I’m not wasting my time with resources that are poor quality or time consuming to make sense of.

5. Stopping the sluggish starts to the day

I use to workout in the evenings.

But I came to the realization that if you start your day off sluggish, your day will be sluggish too so I become a morning workout person instead.

By getting in a good, hard workout at the start of the day, I felt more energetic and pumped throughout the rest of the day.

There are so many physical and mental benefits to doing this.

Lesson learned: By starting the day off with some kind of language learning activity, you’ll be in the ‘zone’ for the rest of the day.

What I’m doing here in Egypt is having a conversation or a lesson at 9am most days (if not on the street then through italki).

I find that when I do this, it puts me in ‘Arabic mode’ for the rest of the day.

So when I’m not training (and not stuck behind a desk), I try to keep as active as possible.

Public transport’s widely accessible in Cairo but if I can walk there, I walk there.

I try to view ‘rest’ periods as ‘active rest periods’ rather than ‘Oh well I’m not exercising now so that means I can sit around and do nothing’.

For example, socializing is the most important thing you can possibly do as a language learner.

This is, after all, why most of us learning a language in the first place.

For me to go and hang out with my Egyptian friends for a couple of hours is crucial to my learning. I see it as both a fun, recreational thing to do and a necessary part of my study.

Of course the same could be said about chilling at home and watching a movie in your target language or listening to music.

When I train I practice ‘mind-muscle connection’.

That means that if I’m working on one muscle for the day, I’m mentally focused on that muscle while I’m training it.

Just having that mental focus there increases the effectiveness of the exercise big time.

Lesson learned: When I’m out and about practicing Arabic, I’m aware of and focused on the details I need to improve at all times.

I’m always paying close attention to the way native speakers use certain expressions, grammar, words and so on – especially if I happen to be learning them at the time.

It’s easy to miss these things if you don’t.

Before languages become an automated process we need to be very conscious about what we’re trying to achieve.

But I’ve found that the more you resist the excuses and win, the less tempting it becomes next time and eventually the very thought of being lazy is a huge turn off.

The same thing is true with food – weening off garbage is hard but once it’s done you’ll look at McDonalds with disgust rather than lust. 😉

Lesson learned: Make a routine, form learning habits and stick to them resolutely.

The more you win over temptations to give up or slack off, the easier it’ll be next time to resist them.