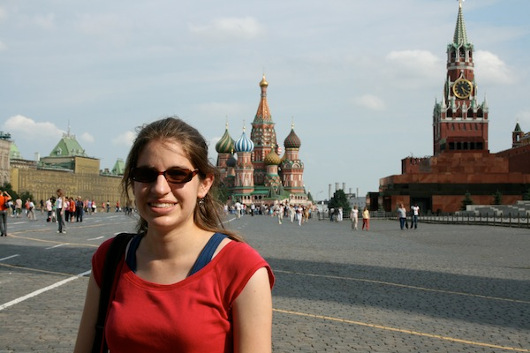 This guest post is from Natalie who runs a blog called Fluent Historian.

Natalie’s one of the most passionate bloggers I follow – she writes quite prolifically about Russian and Eastern European politics and literature, and is super well-informed about that part of the world.

Today she’s sharing a bit about her experience learning Russian which you might find interesting and helpful.

For one of the most comprehensive sites for learning spoken Russian, check this out as well.

Also if you like to use music to help you learn Russian then listen to this.

Whenever I tell people I speak fluent Russian, I usually get a lot of puzzled looks.

“Is your family Russian?” is the usual polite question I get. (My family is from all over, but we’re not Russian.)

I’ve even been asked “Are you a Communist?” (this is a definite no!) or the usual exasperated inquiry of “Why in the world would you study that?” (The answer to that latter question is more complicated than most people imagine.)

In short, it happened like this: I read historical fiction about the Romanovs, the last royal family of Russia when I was young and developed a fascination with Russian history and the language.

When I had the opportunity to study the Russian language after starting my studies at university I jumped on it. Even though Russian class was at nine in the morning every day (earlier than any of my friends’ classes), I loved it and got up every morning excited to go.

I stuck with it and have achieved fluency in the language.

If you are interested in learning the Russian language, the first thing to do to start learning the alphabet.

Russian uses the Cyrillic alphabet which is completely different than the Latin alphabet used in English and many other Indo-European languages.

Other languages that use the Cyrillic alphabet include Ukrainian, Belarusian, Bulgarian, Serbian, and more. (So if you learn Cyrillic, you’ll be able to read words written in these languages as well. Pretty cool, right?)

The Russian variant of the Cyrillic alphabet has thirty-three letters. There are many good resources for learning the alphabet.

I used Master Russian to teach myself during the summer before I started university. The best resources have recordings of what the letters are supposed to sound like. Having recordings by native speakers is very important as there are some sounds in Russian that do not occur in English.

I would recommend spending time working on the alphabet in the beginning.

A strong foundation will serve you well later in your studies. Even though it isn’t too hard to memorize the letters in order, actually being able to fluently read entire words and sentences with them takes some time.

Remember how hard it was learning to read in English (or your native language)? It’s just like that in Russian.

Once you have the alphabet down, it’s time to start learning some words.

I learned words in my class, but there are lists of common Russian words online. Master Russian has a decent list, as does Russian Pod.

Learning some grammar is also important.

Many people would disagree with me (including this blog’s owner who graciously invited me to post here!) but I firmly believe that the study of grammar is essential for learning any language, even one’s native language. (As an aside, I only became a good writer in English after I had two years of intensive English grammar starting when I was twelve.)

Of course, everyone learns in different ways, but Russian grammar is very complex and the sooner you start learning it and assimilating it, the better.

The good thing is, once you know Russian grammar, it will enable you to speak with a higher degree of accuracy when you encounter unfamiliar words. For example, all verbs in Russian have certain endings, and may follow a certain conjugation pattern, so knowing grammar will enable you to use new verbs correctly.

Focus on your weaknesses

We all have our strengths and weaknesses when it comes to language learning.

Some people speak with beautiful accents almost immediately but struggle with grammar, and others are the opposite.

In my case, I’m really good at grammar. I mastered most of the grammar of the Russian language by the end of first year. However, I had trouble remembering vocabulary and understanding the spoken language.

I set out to correct this.

For the first problem, I started using a spaced repetition system (SRS).

Spaced repetition is a learning technique in which flash cards are reviewed at increasingly large intervals.

The program I use is called Anki. Using Anki completely revolutionized the way I learn vocabulary.

I input sentences I find in native material and periodically review these.

Anki isn’t the only SRS program out there but it’s my personal favorite (and no, I haven’t been paid to say this—I just really love this program!). Anki works on Mac and Windows, but if you don’t like it, there are other programs out there.

To improve my listening comprehension, I started doing just that: listening.

I found radio stations with lots of talking and listened to those all the time. Even when I was doing my homework, I had the Russian radio on in the background.

I didn’t understand anything at first but I kept listening. About a year after I started my daily listening, I found that I understood almost everything.

Ultimately, you need to find what your weakness is and focus on practicing that.

If you can’t remember grammar to save your life, study it until you do. If reading is difficult, read the news in Russian every day. (I still do this because I find it enjoyable.)

Ultimately, learning Russian hasn’t just given me some cool language skills (and mad bragging rights for mastering something as complex as Russian grammar).

It has given me an entirely new culture to immerse myself in.

I have read fantastic literature, talked to people who grew up halfway around the world from me, and learned about an entirely different world view.

Sometimes, when people find out that I speak Russian and like foreign cultures and languages, they are puzzled when I say I am not a polyglot, nor do I wish to be one.

I’m fluent in Russian and English, and occasionally somewhat competent in Ukrainian and Belarusian, but I don’t consider myself fluent in the latter two.

The fact is, whenever I attempt to study another language, I always start to miss Russian.

I think of all the Russian words I don’t know right now and how much I enjoy immersing myself in the language.

I have fallen irrevocably in love with the Russian language.

Don’t get me wrong, I respect polyglots greatly.

But for me, Russian is the first and so far only language that I have truly loved.

I’m also considering writing a book for learners of the Russian language.

Interested in this idea? Let me know below in the comments below!

Natalie’s from the United States and she studied history and Russian as an undergraduate, before going to work in finance. In her spare time, she enjoys writing, reading, playing violin, and, of course, speaking Russian.

You can follow her at her blog Fluent Historian.

This was written by Natalie Keating.

Comments: If you’ve got something you’d like to add to this or some constructive criticism you can do that at the bottom of this page. Just please be respectful. Any abusive or nonsensical comments will be deleted.