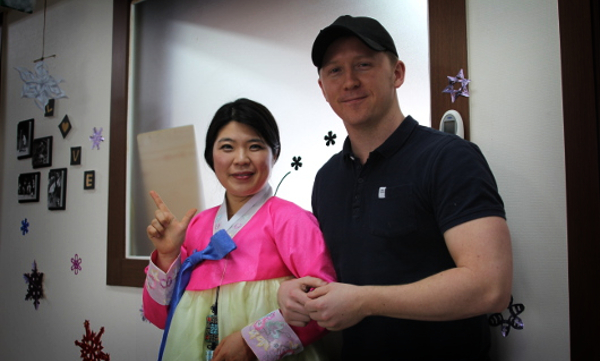 I’m so glad that this bloody Winter is almost over!

Even though it’s still only 5 degrees celcius here I actually braved it and wore a t-shirt outside today (being the Queenslander that I am I’ve been impatiently waiting for the warm weather to hurry up and get here). 🙂

The arrival of Spring means two things for me: it marks 5 months that I’ve been living in Korea on a challenge to become fluent in the language and it also means that I’ll be starting to venture out to explore the nooks and crannies of the country soon, sharing my experiences using Korean.

As I said before, my aim is to demonstrate that fluency in a language like Korean is not the difficult Goliath people make it out to be (it’s placed in the most difficult category for English speakers by the FSI alongside Arabic). With a language like this there are obviously major differences that take time to adjust to but like every language it has features that are simple compared to others too.

I’ve also had some success asking around about the possibility of meeting somebody from one of the most isolated nations on Earth – North Korea. If you ask enough people, eventually somebody knows somebody who knows somebody! I’m really looking forward to learning more about the dialect variations and hearing some stories from people who left NK.

My Korean is reaching new heights every week which has been great (hard work pays off!) but I’m realizing that I need to work on acquiring key vocab that’s been holding me back from going further in my conversations.

It’s true that when you’re a beginner everything in your target language is a bit of a road block but as you progress further it’s really the insufficient vocab that causes most communication breakdowns.

Today I thought I’d share some of my personal strategy for effective vocabulary acquisition – a few points that you might benefit from. In the last few weeks my vocabulary has improved a lot by sticking to this approach.

Words and sentences are acoustic patterns – not writing

Written words are only representations, symbols or images of an acoustic pattern which has a semantic value (meaning) attached to it.

The familiar sound patterns trigger an interpreter in our brain, making us picture or sense the corresponding object/concept/emotion, etc. When we hear the sound pattern of the word ‘dog’ for example, we don’t need to visualize or recall the written word (D O G) but rather we conjure up a picture or a sense of the animal itself as soon as we hear it.

Writing is only something that we invented to record and transmit symbols corresponding to the sounds which in turn represent meaning.

Sounds a bit technical I know but it’s pretty straightforward!

Think of it in this order:

Most people learn vocab in the reverse order.

Although I’m a visual learner and I benefit from seeing the transcripts of what I’m hearing, I believe that the idea of internalizing written vocabulary first is problematic (just as memorizing grammar rules is) because by doing so, you’re attempting to memorize a visual representation of a sound rather than the sound itself.

This is why written tests can be deceptive because they can convince you that you’ve learned a lot more than you actually have.

You may have noticed the difference between recognizing a written word that you’ve studied on paper and trying to catch the same word in a spoken conversation.

Use written texts as an aid to your audio material, not the other way round!

Because our goal should be to internalize acoustic patterns rather than written words, this means:

There’s so much vocabulary that can be elicited using simple language or gestures.

For example, I may not know the word for ‘baseball’ in Korean (they have a different word for it here) but it’s such an easy thing to elicit using body language. If I ever needed to, I could simply say “I play” + pretend to swing a baseball bat and that will be enough for me to elicit that word from a native speaker.

When I lived in Egypt and I wanted to learn fruit and vegetable names, I went to the market to each stall and asked vendors what the name of the fruit was (I remember one street vendor holding up an orange and telling me its name was Ahmad :)). I could of sat at home playing with flashcards as an alternative but why miss out on fun opportunities to speak?

There are so many verbs, nouns and adjectives where body language is enough to elicit the term from someone. For many things, core vocabulary can be used to describe and elicit the words as well (e.g. “The place we go to eat.” – “Oh, you mean a ‘restaurant’?”).

When doing vocabulary study, try to focus on core, essential words and abstract terms that can’t be described or demonstrated but for everything else, aim to learn most of it through conversation.

I recently started using a little Sony IC Recorder that was given to me as a Christmas gift for recording new words on the fly. I was relying on pen and paper before but now having a slim gadget that records straight to MP3 has meant that I’ve been able to capture the way it’s pronounced by native speakers (good for capturing whole conversations too so they can be played back and analysed later).

I’m a big fan of assisted readers such as LWT and LingQ (I personally use LWT on my laptop).

I often use LWT as a translation practise tool for Arabic, for reading the occasional Irish article on Beo.ie and following along with the Iyagi episodes on Talk To Me In Korean.

However, it’s important to again remember that these are written words and unless you have an audio file accompanying the text, it’s not the most effective way to learn spoken words.

My advice for those of you using assisted readers as a way to acquire conversation vocabulary is to make sure you have an audio or video file and shadow it (audibly read along with).

The other downside to reading as a way of acquiring vocab is that you can’t always guarantee the frequency of words.

You may encounter a new word only once in a single article so it’s important to put that word to use immediately otherwise you’re less likely to remember it.

I’ve always concentrated on using memory hooks to help me initially recall vocab during a conversation.

For example, the word for joke in Korean is nong-dam (농담) and in Aussie English a nong is an ‘idiot’ while dam in Arabic means ‘blood’. So I think of a joke about an idiot who falls over and starts bleeding.

The online tool Memrise basically works the same way in organizing these ‘hooks’ and turning it into a bit of a game, spacing study sessions by getting you to come back later and ‘water/harvest’ plants in a virtual garden.

It also does a good job reminding you when you should come back and go back over the words you’ve covered, using a mixture of multiple choice and typing exercises (typing as an output activity makes a big difference).

I must reiterate however: small amounts and use what you learn immediately (if you’re not in country, use italki).

It’s easy to get distracted by the game and its competitiveness by spending an addictive hour or more going over lessons on Memrise. Just like flashcards, it can become a distraction that fools you into thinking you’re making lots of progress when in reality you’re procrastinating.

Try to find lessons on Memrise that focus on targeted, relevant vocabulary and use it as a way to prepare yourself immediately prior to conversations.

Ultimately, we all tackle things like vocabulary study differently and some people have better results than others.

Do you have a method that’s worked well for you when it comes to studying and remembering vocab? Share it below. 🙂