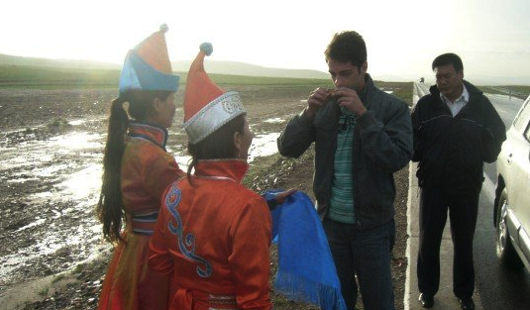 Aaron’s a Canadian expert in Mandarin Chinese with over 14 years of experience and occasionally share insightful information on language learning and other language-related issues.

Personal stories are always the best motivators so I asked Aaron to share a little about his own experience learning Mandarin.

I’ve been involved with Chinese for a long time, though I use this word involved because it kind of feels like a relationship.

Any interest will eventually end up like this if you let it, and although there have been many challenging points, I can’t really imagine my life without this language in it.

The learning process hasn’t always been easy, and there were many times throughout the years that I’ve felt frustrated, wanted to quit, stopped for a while, and then felt more frustrated at the fact that I quit.

I was always happy again though once I started to get back into it.

However, from all of these ups and downs over the years, I’ve discovered several things that work well for learning a language and I want to share them with you here.

It all started back in September 1998

I had just entered Grade 7 and for some reason I thought it would be a great idea to learn Mandarin, so I got my parents to me enrol in Chinese classes once a week after school on Wednesday evenings. I thought this was great at the time, although when I look back on it now I realize that I wasn’t learning as fast as I might have because there really was no immersion aspect to the classes.

That said, it was a good introduction for basic vocabulary, pinyin, and Chinese characters, and I even taught myself how to write Zhuyin.

Two years later, I finished the highest level that a student could reach in this program (don’t read too much into this though; there were only four levels) and I wondered what I was going to do next if I wanted to continue with my language study.

Seeing my predicament as well, my Chinese teacher at the time suggested that I leave the Wednesday class for the Friday class.

This was a big deal! The Friday class was like an actual school. It wasn’t just a few hours a week of learning fun songs and vocabulary with a few other students.

The Friday class was made up of more than 300 pupils occupying about 25 classrooms.

Oh, and everyone was Chinese. It was the equivalent of how a native English speaker might go to an English class, not to learn how to speak English, but to learn about English.

Being the only non-Chinese person in the whole school, and by no means an even remotely competent speaker, you might guess that I had my hands full.

But I learned a lot there.

I learned about Chinese poetry and complex sentence structures and different Chinese festivals, and since the administration was run by a group of Taiwanese ladies, my ability to write traditional Chinese characters skyrocketed.

At one point, I was even asked to give a speech in front of the whole student body basically explaining why I chose to learn Mandarin.

Sometimes it was funny because the parents’ of the students in my class would scold their children for not doing as well as I did on the tests. But let’s be honest here.

I was far behind anybody else in terms of writing or speaking ability.

The only difference was that I was interested and driven to learn while they were being forced to attend.

And so this is my first rule when learning a foreign language.

Be interested! And if you’re not interested, at least be driven to succeed because of some other reason like a job or a spouse. But being purposely involved in what you’re learning is a big plus, and you will surely get farther, and more quickly, if you like the topics you’re learning about.

In my Chinese school, I was able to study Chinese poems and Chinese culture, two things that especially interested me at the time.

This made the experience fun and I never considered it work.

As a language learner, you need to find materials and topics that are good for you personally.

Don’t be afraid to read a children’s book if that level is perfect for you at this moment in time, but also make sure the topic is interesting.

Maybe you’ll like reading about Chinese history and philosophy, or maybe you’ll like to discover how the grammar of the language works. Perhaps you’re even highly intrigued by how to write all of those crazy Chinese characters you keep hearing so much about.

It can be anything, but whatever it is, make sure you have as much fun with the learning process as you can and if you can’t find something that excites you, don’t give up right away; sometimes it just takes a few tries.

I realized one day last year that I couldn’t find any good materials teaching Chinese characters in a useful, interesting, and systematic way, so I figured that I would just write one myself with the goal of it being fun for people to use and something that would be able to give them a leg up on the whole process.

Most of the other books I remember using in the past were all the same – they just told you that there was a thing called Chinese writing and that it was pretty damn complicated.

I hope to change people’s minds about this.

Fast forward to my college years

The Chinese courses that I took for my degree in Asian Area Studies were less interesting than those that I had previously taken at my old Chinese school.

However, this wasn’t because I wasn’t learning anything new, it was simply because this was serious business now.

I was being graded!

One day, I came to the conclusion that my Chinese wasn’t at the level I thought it should have been by that time and I started to panic. I was going to graduate soon and all these other students were speaking it so well.

A friend of mine had even made a documentary about motor-biking across China for God’s sake:

How was I going to find a job in Asia if my Chinese wasn’t good enough?

Just to be clear, this is the kind of pressure you don’t want to put on yourself, and looking back, it may have only been a perceived inadequacy, though it didn’t seem like it at the time.

This extra stress on myself made any further real and involved learning of Chinese too overwhelming.

I never thought I’d be good enough, I lost confidence in myself, and I stopped.

Instead, I went on to other things, found a job in another field, and tried my hand at learning other languages (though this in itself actually proved useful later on).

I only realized the mistakes I made later on.

Getting frustrated with slow progress, not having interesting resources on hand, and ultimately putting the language up on a pedestal are sure ways to never see success.

So early in 2012 I decided to take Chinese up seriously again (there’s always room for improvement).

I found that I hadn’t forgotten too much of what I had previously learned and I attribute much of this to still hanging around with Chinese friends during this formal “off-time” from Mandarin study.

For example, I like listening to Chinese bands, reading books, and I’ve found that I also really enjoy watching Taiwanese dramas, all excellent ways to enrich your current stock of vocabulary.

Rule #2: Use the small chunks of time throughout your day to get your practice time for these activities in

It’s rare that you’ll have long periods of time every day for which to study, so pull out your phrasebook while you’re waiting in line for a coffee or go over a list of new vocabulary words while the commercials are on TV.

You’ll find that you’ll not only see a lot of progress in a relatively short amount of time (as compared with trying to study for hours on end only once or twice a week), but you’ll also stop wasting a lot of time in general because you’ll become very aware of those free minutes here and there in your schedule.

One final suggestion that I have to help you along, and especially if you’re just starting out with learning Chinese (or any language for that matter), is to find people to talk with early on (italki is perfect for this).

I’ve joined several really good language exchanges, and these have been immensely helpful in terms of introducing me to countless native speakers who I can converse with and learn from.

I’ve found this face-to-face interaction really important because language is a social activity and it needs to be shared.

And don’t be afraid to make mistakes!

People will be floored that you’re even interested in learning their language, let alone the fact that you might even be able to say a few words already. Whatever you do, just have fun and use your time wisely.

Don’t worry too much if you can’t conjugate the past-tense of a verb right away or if you can’t get the hang of how to write a new script.

Take a moment to think about how you can make the learning process interesting for yourself and then do that thing as often as you can.