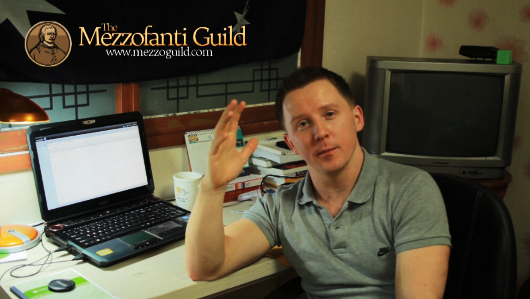 This week marks three months that I’ve been living and working in South Korea determined to become fluent in the Korean language.

As I’m now one quarter of the way through my time here, it’s time for an update.

I arrived in this country having no prior knowledge of Korean apart from ‘hello’ and ‘thank you’, and I admit that before I came here I knew absolutely nothing about Korean culture, cuisine or geography.

It was a part of Asia that I was totally ignorant of.

Never in my life did I consider coming here to learn this language but I have to say that I’m really glad I did.

It’s been a very steep learning curve but one that I’ve really enjoyed up to this point.

Today I’m going to share a short summary with you on some of the things I’ve learned so far (positive and negative), as well as a short video update for those of you who are interested in tracking my progress.

You’ll see that I’m still painfully slow and have a long way to go but compared to my progress 2 months ago (see this video) you can see a noticeable improvement.

How I’ve tackled Korean over the last 3 months

I’m working in South Korea as an English teacher which comes with its own serious advantages and disadvantages for me as a language learner.

It’s not the best job situation for me as I definitely don’t regard it as a long term career path but it’s really the best option for anyone wanting to spend an extended period of time in Korea.

Obviously being in a job where you’re required to only speak English is not the most ideal situation to be in.

The good thing about it however is that it puts me in a position where I’m always surrounded by native speakers at work – both teachers and students who are almost always speaking Korean to each other (outside of class that is).

There’s an atmosphere of Korean which means that there’s always the possibility of passive acquisition and an important stream of repetitive input.

Throughout the day I’m able to ask my co-workers and students how to say certain things, and seek clarification on meaning and pronunciation. Even though each English lesson I teach is 50 minutes and any use of Korean is not allowed during class time, there’s always a spare minute or two where I can let the kids teach me a new word or expression in Korean.

I walk away from nearly every lesson learning something new in Korean – even if it’s just a single word.

My ear is constantly tuned in to listening to the exchanges between my students.

They’ve been my best source of banmal (반말) – casual/informal speech – which is great as most of my study material tends to focus on the more formal ways of saying things.

Now, I’m sure that experienced learners of Korean will be quick to highlight all the grammatical mistakes that I’ve made in the video below.

As I’ve said before, you don’t need to study grammar to learn to speak a foreign language and these rough, early stages where the language is painfully slow and full of mistakes will gradually begin to even themselves out over the next few months.

If I had spent the last 3 months with my head stuck in a grammar book, I would have ended up with little more than a mechanical knowledge of Korean.

In many areas I’ve already noticed myself naturally correcting mistakes through plenty of exposure to native dialogues and also having my production being error-corrected by native speaker friends.

Once I reach a comfortable level of basic fluency (which I hope to reach by the 6 month mark) I will indeed go over some grammar, particularly to help my literacy skills improve but for now I’m avoiding it and focusing on acquiring language chunks from natural dialogue.

An excellent Korean resource I had a lot of help from that only focuses on natural dialogues is Rocket Korean. It’s very light on grammar but has the most comprehensive course content for Korean I’ve seen anywhere.

I now do 3 lessons a week – one in person with a friend and two through italki.

My in-person lessons on Friday mornings are with a friend and we usually just spend an hour chatting about what we did on the weekend, plans, gossip, our love lives and so on. 🙂

She’s been an awesome help to my Korean.

I decided that it wasn’t going to be enough though and wanted some extra one-on-one attention so I jumped on italki and found another conversation partner who I chat with twice a week.

As you can imagine, this alone takes up a lot of my free time but you have to be prepared to make time (and sometimes financial) sacrifices if you want the results! 🙂

FYI my lessons through italki are not expensive. They work out to be about $9 an hour which I mentioned here.

A few good and bad points

It’s true that the more languages you learn (especially if they belong to different language families) the easier it gets learning new ones.

From what I’ve seen of Korean so far especially with regard to pronunciation, word order and politeness levels, I can understand why it would be quite challenging for someone who’s never learned a foreign language before to pick it up.

I’ve learned Georgian myself and I also studied Turkish for a while so agglutinative languages with S-O-V word order like Korean are familiar to me.

A lot of the vocabulary I remember from Mandarin Chinese has also been a big bonus as the Korean language is heavily influenced by it – a significant part of its vocabulary and number system are derived from Chinese.

Korean verbs in my opinion are simple in comparison to many other languages.

Most of the time it seems you don’t need to use subject pronouns to stipulate who is doing an action. So for example, bwa-yo (see) can mean I see, you see, he sees, etc. The subject is simply implied by politeness levels, intonation and context.

What I have found challenging and interesting at the same time is the response from Korean people to even slightly incorrect pronunciation – particularly with vowels.

If you don’t get your vowel pronunciation spot-on, people tend to be really confused.

Even though Korean is not a tonal language like Mandarin, I’ve found that there’s a lot less leeway here for inaccurate vowel pronunciation than many other languages (e.g. I was saying “I do” as ha-yo instead of hae-yo for a while which sounded pretty much the same to my ears but people just did not understand me at all).

I have heard similar remarks from other people too so I know I’m not the only one who’s experienced this.

What it means for new Korean learners is that pronunciation is a really big deal and you should work hard on it early (you should be working hard on pronunciation in every language anyway).

So what’s ahead for Korean?

The bulk of my time so far has been focused on input.

Think of the words and expressions you accumulate as a water well in your mind that you draw from – if your well is dry and empty then you have nothing to say.

This is why spending a majority of the time speaking from the start is not an effective strategy.

You need lots and lots of input so you actually have something to say AND understand what other people are telling you.

However as I approach the 4 month mark I intend to gradually spend less time focusing on input and more time implementing/using what I already know.

All the acquired vocab and expressions will sit there as passive, useless knowledge in your mind until you get out there and activate it.

This is what I’ll be turning my attention to in the coming months.

I also have the following Korean-related goals for the rest of my time here:

Some of this will of course have to wait a few more months till I’m at a much stronger level in my Korean.

Here’s where my Korean was at 9 weeks ago if you haven’t seen it.