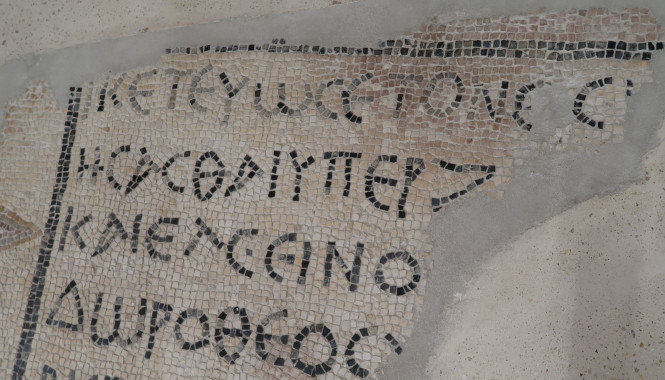 Koine Greek is the most rewarding language I’ve ever studied.

Even out of all the spoken languages I’ve learned and traveled with (including fluent Arabic), nothing has been as deeply soul-satisfying as learning the language of the New Testament.

I’ve been reflecting a lot lately on my time in college studying the language.

Looking back now, I can honestly say that my theological studies wouldn’t have been anywhere near as substantive had I of not invested in Greek the way I did.

It opened my eyes to so much and brought historical documents to life.

But not every student appreciates the value of biblical languages.

In fact, I’ve always found it odd when I meet seminary/Bible college students who choose not to take up Greek and Hebrew (or at the very least one of the two).

Even more odd is when seminaries don’t require Greek and Hebrew as prerequisites.

When I started Greek, it was actually the second year into my degree and at the time was considered an “elective” subject (meaning non-compulsory).

Many students naturally opted out.

I kept thinking to myself:

How on earth can you study something that you lack the ability to read?

You’re going to be forever relying on someone else’s flawed interpretation.

And while this applies to both the Old and New Testaments, it is especially true of Greek.

While Hebrew and to a much lesser extent Aramaic are vital to OT study, it should be absolutely paramount that every theology student learns Greek.

Anyone who teaches from a pulpit should have at minimum a few years of Koine Greek under their belt in my opinion.

So today I’ll share with you why I think Greek competency is paramount.

1. Koine Greek is the language of the founding document/s of your faith

That should end the argument right there.

Why do I believe Greek is more important than Hebrew or Aramaic?

Simple: The words of Christ and the apostles are recorded in this language.

First of all, let’s consider that other major religious movements venerate the importance of learning the original language of their founding documents or holy books.

Hebrew in Judaism, Arabic in Islam, Sanskrit in Hinduism, and even the Gurmukhi script in Sikhism for example.

And while it may not be obligatory for adherents of all these religions to learn to read the original text of their holy books, it can’t be denied that it’s extremely important to them.

But what about Christianity?

Well… first of all, we have to continually emphasize the difference between ‘word’ and ‘the Word’ in orthodox Christian theology.

At least they shouldn’t.

Sidenote: Most evangelicals today forget that the NT is a collection of inspired writings by men pointing their readers to the only Word – a person, namely Christ. Inspired ≠ divine.

So I would never suggest that Koine Greek or Hebrew should be treated as ‘sacred languages’.

However, Christians (especially those who teach) should still afford their own founding documents a certain level of ‘linguistic veneration’ or respect.

Learning the original language is a way of stating:

These texts are so important to me that I care about what they actually say.

If you’d happily take the time to learn some Spanish on a trip to Mexico or French on a trip to Paris, then doesn’t the document you live by deserve some attention?

2. You can never truly empathize with the writers through a translation

I say this as someone who has worked in the field.

No matter how good the translator is, there is always something lost in translation.

Oftentimes it isn’t the words or meaning that get lost but something much deeper and more profound. These are cultural nuances that can only be understood or felt on an abstract level.

Think of your favorite novel in English.

Take a look at the way that the writer expresses him or herself through their articulation – it might not necessarily be the words themselves but the way those words are used.

Example 1: It may be a deliberate choice of one of several synonyms

Think of the conjunction ‘but’ in Koine Greek (one of the first you’ll encounter in any Greek course).

Most commonly: δέ and ἀλλά.

Both words convey the same general meaning in translation but the nuanced difference in their force and intention changes everything about the way they’re meant to be read.

Example 2: It may be the way they’re arranged in a sentence with intentionality

A good example of this is the placement of conditional clauses (protasis and apodosis) in Koine Greek.

Koine’s fairly predictable when it comes to conditionals – usually an “if” is placed before whatever the “then” is.

But occasionally you’ll come across a protasis (if) being intentionally inserted later in the sentence:

…and if children, heirs also, heirs of God and fellow heirs with Christ, if indeed we suffer with Him so that we may also be glorified with Him.

There are also different degrees of probability depending on the construction of the conditional.

This all matters to what the original writer was trying to convey and simply translating “if” doesn’t always cut it.

Example 3: It may be their deliberate proximity to other words

“Whoever loves his life will lose it, while anyone who hates their life in this world will keep it for eternal life.”

‘Life’ x3 in one sentence in English.

The first two instances use the word ψυχή (which can refer to physical being or breath), while the third, ζωή, is immaterial life (eternal life).

So there’s a deliberately intentional contrast here between two very different concepts or states of life – one eternal and non-physical, and the other a fleshly, physical one.

You just don’t see that clearly in an English translation.

3. There are patterns and constructions that are missed or unclear in translations

As you progress with Greek and the language becomes more natural to you, you’ll start to appreciate the very different writing styles used by each author.

And not just styles but linguistic cues, markers and patterns.

These patterns and constructions are missed or easy to miss without the original text.

An example of this is the chiasmus that you see throughout the Scriptures.

This is a poetic or literary style that’s been used for thousands of years (of Hebrew origin?) that uses a terraced sequence to build up to a climax from an introductory point and then return to the original point to tie it up.

Even if you don’t know any Greek, you can spot a pattern here.

You can get a sense for it in the English too but it’s far clearer when you read the Greek.

While the Gospel (and letters) of John are the clearest examples, patterns similar to this are used all throughout the NT.

They are incredibly important because they highlight the focal points that the author is drawing your attention to.

4. You can’t make sense of history without it

A knowledge of Greek is essential to having a proper understanding of Church and more generally, European history.

There are a few major historical events that come to my mind as good examples.

Many of the divergent (or heretical) Christologies and their subsequent council responses could (in a sense) be all boiled down to translation.

Arianism‘s dent on history was enormous.

Side note: I once had an amazing debate with a Jehovah’s Witness (similar to Arianism) over the missing definite article in John 1:1. If I didn’t know Greek, there’s not a chance I could have argued my position.

This Christological heresy was based on Christ being ομοιούσιος (similar substance/essence) to the Father (in other words, a separate, created being).

In response, the First Council of Nicaea decreed that Christ is ομοούσιος (same substance/essence) as the Father (I should note that this concept was also part of an earlier anti-Trinitarian heresy called Sabellianism to say Father, Son and Holy Spirit are modal rather than distinct).

The only thing different about these two terms at a cursory glance is a single letter!

But the ramifications of that seemingly insignificant difference were massive.

Important: These later Greek terms were not biblical – they were employed over the centuries to wrestle with and make sense of Trinitarian and Christological mysteries.

As historians and theologians, we just can’t properly comprehend these arguments without Greek.

The other world-changing historical event that comes to mind is the schism between the Eastern and Western churches.

Most people wouldn’t be able to tell you how we ended up with Roman and Orthodox branches of the Church.

There were several reasons (including disagreement over the Pope).

But one of the main reasons why they separated came down to a translation.

The Westerners (now Roman Catholics), took the Nicene Creed (originally written in Greek in response to the heresies mentioned above), translated it to Latin and inserted a Latin word into the creed (filioque) meaning ‘and the Son’ (the Holy Spirit… who proceeds from the Father and the Son).

The issue with this (other than the fact that the Easterners did not like having a foundational document altered) was that the original Greek creed took the verb directly from John 15:26 (ἐκπορεύεται) — “to depart or come out of (the Father)” whereas the connotation of the Latin verb is where we get “proceed” from in English and stated “from the Father and the Son”.

At cursory glance it seems an incredibly small nuance but it was big enough that it broke the Church in half.

5. How do you grasp and respond to textual criticism?

Methods and philosophies that were once confined to the humanist social sciences have permeated throughout seminaries as well.

I’m referring to things like textual criticism and deconstruction.

Literally everything is picked apart and held under the microscope.

There are good and bad aspects to this.

On the one hand, critical analysis is healthy and leads to greater understanding.

Then on the other hand, faith requires eventually letting go and just believing what can’t be visibly verified.

Textual criticism of the NT had me questioning my own beliefs for years – if the earliest piece of Greek manuscript we have is 2nd century, then how can anything be trusted?

e.g. Who believes that the last chapter of Mark is authentic?

To put this into perspective:

It would be like me handwriting a copy of an original account in 2019 of something that happened back in the 1800’s and then someone picking that up in the year 4000 and believing every word of it!

This is essentially where we’re at.

But this is where Greek study is so important.

There are literally thousands of these Greek manuscripts from various geographical locations over a large period of time.

Imagine if that same handwritten copy of an account of mine, written in 2019, had 6000 copies all over the world written by different authors with insignificant variations.

Those 6000 independent copies that are almost identical would confirm and validate an original.

Knowing Greek is what gives you the ability to wade through and respond confidently to textual criticisms like these.


I usually keep my content specifically language-related but I thought this would be a fun topic to talk about today.

Did I get any information wrong or miss an important point?

Let me know in the comments below.