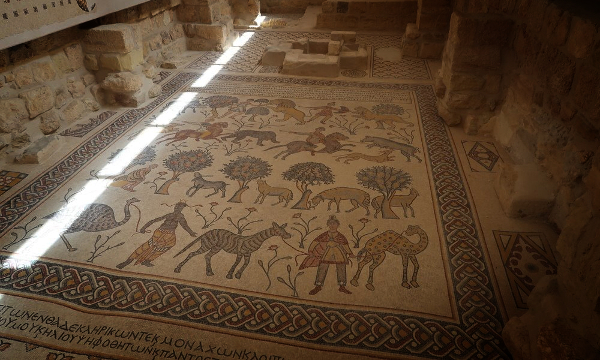 I jumped back into serious Greek study about two weeks ago.

As I mentioned in my last post, I’ve committed myself to learning Modern Greek to conversational fluency this year while also reviving and mastering Koine Greek.

Koine Greek is an ancient (approx. 300 BC to 300 AD) ancestor to today’s Greek and a language that I spent 4 years on in college but never quite completed.

This past two weeks has really been an eye-opener for me as to how much I truly remember.

And how much I’ve forgotten.

As I’ve said before, if you learn a language properly the first time then you never forget it. This is why I believe that if you learned a language in school but can’t remember it, it means you never really learned it in the first place.

I can already see those aspects of Koine Greek that are etched into my memory forever.

And other parts that I must have not learned properly as I’ve completely forgotten them.

Today I’ve been reflecting on my initial struggles with Greek way back in college and also the common points of confusion that my peers had when starting the language.

I’m going to share some of that with you.

One of my main goals with this project is to identify the points where Koine Greek is a major struggle, look at how it’s commonly taught and see if I can find a way to radically improve it.

The problem with the way Koine Greek is taught

I’ve been reflecting on this for a long time:

What’s wrong with the way most colleges (and resources) teach Koine Greek?

I was poring over highly respected Greek textbooks like The Elements of New Testament Greek by Duff and Wenham, and Basics of Biblical Greek by William Mounce which go into great detail on all the fundamental aspects of Koine grammar and I kept asking myself:

How could this be better taught?

Just hearing terms like optative mood, second Aorist middle and periphrastic tenses is enough to make a student drop out of Greek and give up altogether.

But the reality is that learning these things is unavoidable and necessary.

This is especially true with Koine where an incorrect verb tense can have enormous theological ramifications.

If you think of the difference in English between “I have stolen money” and “I stole money” – it’s not just a small grammatical difference. Saying “I stole money” sounds a lot more serious and recent – like a confession of something you’ve just done. “I have stolen money” on the other hand could have happened years ago and you’re just recalling it as a past experience.

So when translating Koine Greek, we can’t escape the fact that the grammar is truly important to learn.

The question in my mind is when and how.

It’s at this point that I want to present a challenge to every NT Greek student (and teacher):

I think the way that Koine is traditionally taught is backward and a lot more tedious than it needs to be.

With modern languages, we don’t start off by learning how to become a translator like we do with ancient languages like Koine.

Imagine walking into your first French lesson and being handed a curriculum for advanced French translation on day one:

“By Week 12 of this term, we’ll be translating the philosophy of Jacque Derrida.”

That’s essentially what we do with NT Greek courses.

We expect students to go from zero knowledge of a language to translating deep, abstract theological concepts in the New Testament within a few short months of study.

The more I think about it, the more I realize just how completely unrealistic this is.

You certainly wouldn’t see this in any modern language course.

As I’ve said before, in order to become a translator you need to first know a language.

It doesn’t happen the other way round.

NT Greek classes today don’t teach the language as a once living, natural language – instead classes are more like code-breaking sessions where you learn the appropriate rules and then proceed to crack the text.

It’s almost expected that you’ll forever rely on a lexicon, grammar tables and commentaries in order to use Greek.

In other words: never actually learn the language.

You learn the alphabet, some core vocabulary and enough familiarity to navigate a lexicon.

But imagine being able to pick up a Greek New Testament, read a Pauline letter fluently and actually hear the human who wrote this – hear and get a feel for the human creativity behind all the little nuances, words and expressions the author used.

But can you treat a dead language like it’s still alive?

So the big question is:

How does someone learn a dead language as if it’s still alive?

How do we avoid treating Koine Greek like a code-breaking exercise?

If you’ve followed me for a long enough time then you’re probably already familiar with how I approach modern languages.

Over the past few years of running this blog, I’ve been able to achieve conversational fluency in languages like Russian, Korean and Irish with virtually no grammar study.

Languages with a reputation for “hard” grammar.

I achieved this through a method I call chunking which I developed on the back of Michael Lewis’ Lexical Approach (an ESL methodology).

I stand by my belief that you do not need to study grammar in order to learn to speak a foreign language. I’m living, walking proof that this is accurate.

To sum up how this works very briefly, languages are not just a system of rules to be memorized.

Languages work as a stack of building blocks.

We take words, collocations, phrases and sentences that we’ve heard countless times throughout our lives and we piece them together like blocks – almost everything we say in our first language is completely unoriginal.

You may think the sentences you’re speaking are original but in fact all you’re doing is borrowing from what you’ve already heard (or read).

You’ve encountered it all before.

When you speak, you’re piecing together chunks of language that you’ve heard thousands of times throughout your life. Those chunks become so totally familiar to us that we speak them without even thinking about it.

It becomes a habit.

As native speakers, we’ve learned to plug the right pieces into the right places according to what we’ve heard countless times, whereas a non-native speaker attempts to put pieces where they don’t fit based on assumptions (because they haven’t had the same length of exposure that we have).

Or, like most Koine Greek students, they try to align everything with the grammatical rules they’ve learned – rules that are often broken in natural speech.

Chunking is about letting go.

Letting go of the “need” to know how everything works at once and instead just letting exposure and repetition do the work for us.

I’m attempting to apply this to Koine Greek.

Looking for the patterns in Greek

As I said above, knowing Koine Greek grammar well is unavoidable and something you’ll gradually have to learn if you take theology seriously.

Small nuances of meaning can have a major impact on what people believe.

So I’m not suggesting we abandon grammar or even suggesting that it’s possible in the case of a language that’s no longer spoken.

The goal with what I’m doing is to work on acquiring proficiency through frequent exposure to high-frequency chunks (whether they be particular word forms, collocations or phrases). 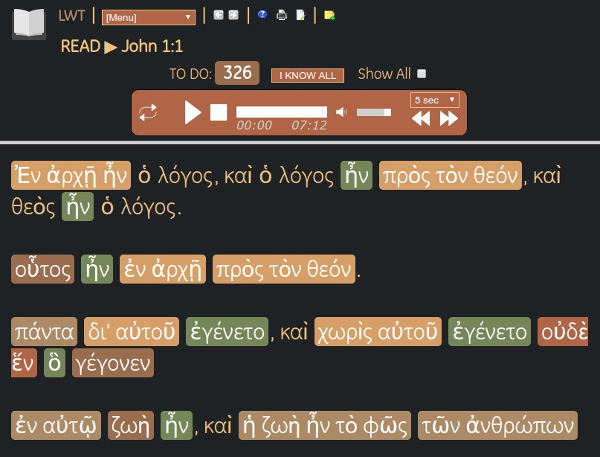 Just looking at this first passage of John (a simple example to begin with), you see that I’ve begun to highlight (using LWT) what I call “chunks”.

These are the kind of high-frequency patterns I’m focused on:

Ἐν ἀρχῇ – in the beginning

δι’ αὐτοῦ – through him

χωρὶς αὐτοῦ – apart from him

But it goes much further than that.

Pay attention to frequent patterns of placement of words like ἦν and ἐγένετο. There’s a predictable flow and pattern to the way everything’s spoken/written (same reason we say “knives and forks” and not “forks and knives” in English – it all has to do with natural, phonetic flow).

As I’ve said before in posts where I’ve talked about chunking, you may think that you’re only learning a few lines of text.

Isn’t it a waste of time memorizing half a dozen lines of a passage?

These few simple lines will enable you to recognize patterns in a multitude of other instances (I explained this here) – especially when it’s the same author.

I’ve listened to this native (Modern Greek) audio of these few lines literally hundreds of times in the last few days (probably driving my wife crazy playing on repeat!).

I’ll continue to listen to this another thousand times until it rolls off my tongue like English does.

Even though the pronunciation difference between Koine and Modern Greek is undoubtedly very different, I’m using these native recordings daily for repetitive listening (it also helps me practise my Modern Greek pronunciation).

Note: If you asked me what verb tense or declension so-and-so is, I probably couldn’t name it for you at this stage – but I couldn’t do it in English either to be honest.

I look at a word or construction and say:

“I don’t need to know why that is what it is yet. The rules behind that construction don’t matter right now.”

Treating the language as a living language (although dead) and hearing the author’s voice as I read.

FYI: I’m using the Modern Greek reading of the Koine text that I found on Vivlos. For clarifying terms and inputing them into LWT, I refer to GreekBible.com.

Curious about effective grammar study methods for Koine Greek? I’ll cover that in an upcoming post.