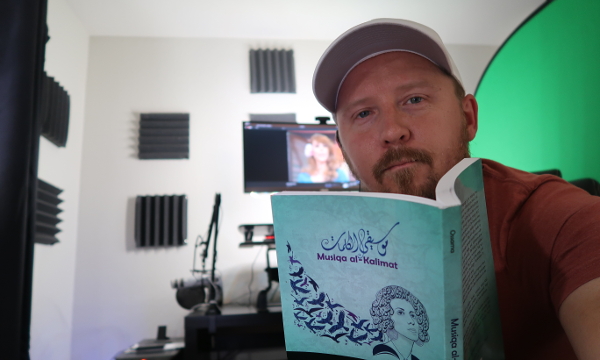 A while back I was sent a review copy of the book Musiqa al-Kalimat by Bahaa Ed-Din Ossama from the American University in Cairo.

The book’s aimed at Intermediate -> Advanced learners and follows on the heels of Kilma Hilwa which was released by the same author a couple of years prior specifically for Egyptian Arabic.

While I can’t comment on the quality of Kilma Hilwa (I’ve honestly never actually used it), Musiqa al-Kalimat does a great job at exploring 20 classic songs from the Arab world (sung in Standard Arabic) from the 1940’s up until recently.

I don’t know about you but I love some of the older Arabic songs (esp. Fairouz and Umm Kulthum) so I found this one really fun to explore.

These songs are beautiful to listen to. 🙂

Musiqa al-Kalimat has been sitting on my desk for quite some time now (I feel terrible for taking so long to look at it) so I’m just now getting a chance to spend some time with it. I wish I had sooner.

Here’s what I found.

There are 20 songs presented in ascending order of difficulty (supposedly – see below).

Some of the songs are only a few lines long making them easy to digest for you as a learner (side note: here’s a good primer for newbies on Arabic numbers).

The song lyrics are presented at the start of each chapter but in order to get the English translation or the YouTube link, you need to skip to the back of the book.

While I think it’s great that they’ve included links to the songs, the problem with including non-official YouTube channel links means that the songs could be removed at any time. So if you find that a song link is dead, you’ll have to search for another uploaded version (admittedly not very hard to locate these classic songs online anyway so it shouldn’t be a problem).

After the lyrics, the key vocabulary along with English translations are presented (I have one criticism about this below) as a list.

But it is interesting to read some of the background of the songs and great reading practise.

This is all done in MSA (I’m not 100% sure but I think Kilma Hilwa presents the exact same kind of commentary in Egyptian Arabic).

The chapters are then ended with some pretty detailed exercises – comprehension questions, fill-in-the-blanks, find-the-opposites, correct the mistakes, etc.

I found the exercises quite challenging.

The usefulness of music in Arabic (or general language) learning

I don’t think I need to convince too many people that music is incredibly useful as a learning tool.

Of course it does depend on the learner as to what extent its useful – some people aren’t as ‘into’ music as others.

But generally speaking we all enjoy listening to music and enjoyment is one of the key determiners for success in language learning.

Both in terms of motivation (if we enjoy something, we’re more likely to keep at it), but I’ve also stated in the past that people who enjoy the process of language learning are better learners than those who treat it as a means to an end.

So since music is enjoyable for most people, its benefits can’t be overstated.

This is also one of the reasons why I’ve often promoted Earworms Arabic, which as far as I’m aware is the only audio product that exploits ‘stuck song syndrome’ to help you remember Arabic phrases.

I’ve said many times in the past that the most successful language learners are those who assimilate into the target culture.

And you cannot assimilate into a culture if you dislike the culture – nor can you truly absorb the language (I’ve raised this issue in the past when dealing with circus polyglots who express a desire to learn Arabic and yet dislike Arab culture! :|).

To assimilate well, you need to understand and desire to be part of the culture you’re assimilating into.

Traditional music (especially as far as Arabic is concerned) is paramount.

I know from experience living in Egypt that traditional music plays a huge part in daily discourse for many Egyptians.

Musiqa al-Kalimat offers tremendous insight into traditional Arabic song including many powerful, poetic expressions that the artists use.

Just a few minor criticisms of the book

So just a few small issues I want to point out.

The selection of key vocabulary is quite random and not really level-specific at all.

Some of the most difficult songs (later chapters) have incredibly beginner-level words in their key vocab section which doesn’t make much sense to me.

For example, I’m pretty sure that advanced students already know basic terms like love, water and but. There are loads of absolute beginner terms like these thrown into the advanced lesson lists that really don’t need to be there assuming the reader is at a very high level already.

Parts of some of the exercises do the same thing. It doesn’t really hurt but it’s just not necessary.

The other point I wanted to highlight is that the lessons are supposedly in ascending order of difficulty.

But it seems to me that it’s more to do with song length than actual difficulty. The earlier songs in the book are very short but they tend to get longer toward the end.

Again, it’s not that big of a deal but length does not necessarily equate to higher difficulty.

Finally, the book includes links to YouTube (which as I mentioned above may end up becoming dead links over time) but it would have been better to include MP3 downloads of the songs.

I’m not sure if this legally possible in Egypt but it would mean that you wouldn’t need to go and type in a long YouTube link by hand (and hope it isn’t a dead link).

Overall, this is an excellent (and super interesting) little resource for serious Modern Standard Arabic learners.

Used these books before? What are your thoughts?