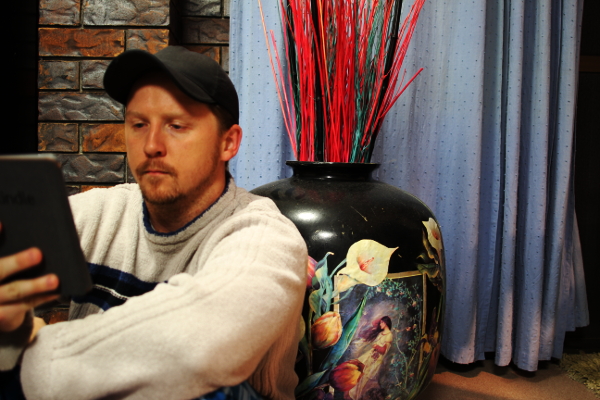 You’re learning (or would like to learn) to speak a foreign language.

If you’re learning a foreign language because you’re interested in foreign literature or just want to read then it isn’t quite as applicable.

Likewise if you’re taking a course that requires you to focus on literacy skills then you don’t really have a choice.

There are lots of good products out there for language learning which are really focused on literacy-based foreign language learning. These are products such as LWT (view my post here), Duolingo, ReadLang and LingQ to name a few.

And then of course there are a plethora of foreign language books and bilingual readers for many languages.

But to what extent does literacy benefit speaking?

Can reading produce spoken fluency in a foreign language?

Let me clear a few things up.

There’s no such thing as a written language

There’s no place on Earth where people communicate by writing as a primary form of communication.

None that I’m aware of anyway.

Writing is something we invented many thousands of years after humans were already verbally communicating as a means of recording information and corresponding with people far away.

In fact reading and writing was something that only the very elite members of society were even able to do until recently in human history (and there are still many parts of the world where people don’t even have an alphabet).

Language is 100% spoken (or signed in the case of deaf people).

What we read and write on paper is a representation of those sounds and signs.

But that’s all it is – a representation.

This means that reading and writing are essentially an unnatural form of communication.

Now if you think back to your own experience as a young child learning to read – did you learn to read before or after you were speaking fluently?

The answer is you were yapping and singing away before you could even read A, B and C.

Unfortunately nearly all language courses and programs miss how important this is and teach language backwards. They start with literacy skills and assume that reading fluency will lead to speaking fluency.

Reading will not make you a fluent speaker.

Not only is starting with literacy a backward way to learn but it can be detrimental to your conversational skills as well if you’re just starting out.

Focus on what you hear, not what you see

We’re assuming we’re talking about spoken rather than signed languages here of course.

The reason why I constantly advocate a ‘chunking method’ (it’s an awful word I know) is that it’s all about taking real bites of audio, listening to it repeatedly and putting it straight to use even if you don’t fully understand the grammar.

I’m confident that everybody would have a lot more success (and less stress) becoming fluent speakers if they put down the books and programs like Duolingo (which are all literacy-based), and just get back to the basics of listen and repeat.

There’s no need to break everything down and ask 100 questions about how everything works.

You’ll be amazed at how something as simple and natural as this can be so effective. This is pretty much my approach to language learning summed up in three words.

Languages are a series of sounds.

Although a written word can help us remember what we’re hearing, it can also interfere with our direct association of sound with meaning.

You hear a sound and you immediately associate that sound with its corresponding semantic meaning.

But when you’re using written text, the association works more like this:

In this last scenario here, you associate the written word ‘house’ with its meaning (a picture of a house) but then the actual sound of the word is the final association.

This means that if you’re in a conversation, the sound association has taken a backseat and you’ll struggle to immediately associate it with its meaning when somebody says it to you or you’ll struggle to recall it and use it in speech.

This is why people who have done a lot of book study end up stumbling and forgetting everything in conversations.

The ideal that we’re all aiming for (assuming we want to be fluent speakers) is of course the first sequence:

The immediate association of sound with meaning and vice versa.

This is where whatever it is I’m hearing has an immediate semantic meaning attached to it without a written representation.

In other words, if I say the word ‘dog’ to you, you instantly register that sound with mental imagery of a dog – you don’t think back to a written word and then draw a connection from that.

Am I making sense here? 🙂

So when is reading actually beneficial?

Like I said, you learn to read your native language after you speak it fluently.

In terms of the actual benefits this gives us as native speakers with our first language, reading helps us not only communicate and record information but also to expand our native vocabulary and learn more articulate ways of expressing ourselves.

Some of the words and expressions I’ve used here in this post for example have probably come from things I’ve read over the years rather than heard.

After I was already a fluent speaker.

It’s also important to remember that we don’t always write the same way we speak.

Depending on what kind of material we’re reading, we might be reading expressions that are highly unusual in ordinary conversations. This would be the case for things like newspapers and academic papers.

Even some types of fiction are written in language that just isn’t natural when spoken between two people.

So if you are reading as a way to improve your speaking skills then it makes sense to ensure that whatever it is that you’re reading is written as if it were spoken.

As I’m writing this, I’m speaking it to myself so in a sense what you’re reading here is my own voice. I blog the same way I talk (minus all the umms and aahs).

Of course when I write a college essay or a formal letter it’s a whole different story.

Be very selective about what you read.

Read what interests you and if it requires you to use a dictionary to look up every second word then it’s too difficult and unsuitable as a learning resource. It should be material that’s at the same or just a slightly higher level than yours (low enough that you can read it without a dictionary but high enough that you’re being challenged).

You should be able to deduce meaning of a new word from its context without a dictionary in most cases.

Remember: you’re reading to build on and improve what you already know so it’s ineffective if you’re still at a very low level.

As I’ve demonstrated above with basic sound/semantic association, you’re much better off using pure audio (and video) to learn the basics of conversational language and most importantly, frequent conversation with people.

Negotiation in conversation is one of the most important and not-talked-about-enough things you can do (click here where I explain what this means and how it can help you in detail).

So think of reading as an advanced learning activity as a new learner and avoid anything with a strong focus on literacy skills.