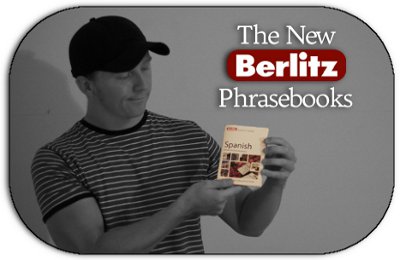 RECOMMENDED: Combine a phrasebook with affordable lessons on italki (as low as $6 an hour). Chat directly with native speakers and wherever you are in the world.

Have you ever read a phrasebook and been frustrated by the absence of up-to-date, relevant phrases or expressions?

A while back, Berlitz ran a competition with the Daily Mail asking readers to offer suggestions as to what they think should be included in the next edition of their very popular phrasebooks and the result was released: the newest edition which was revamped to include reader suggestions and a slick new design making it easier than ever to find what you’re looking for.

The people over at Berlitz were kind enough to send me a sample of their newest Spanish edition so I thought I’d share my impression with you.

Requesting input from readers as to the kind of language content that’s been lacking in their product was a good move by Berlitz.

To use technology as a prime example, it’s evolving rapidly and this is having a direct impact on the language we use (e.g. “to Google something”, “to tag a friend” or “to tweet”) so it makes sense for commercial language learning companies to start to incorporate these kinds of expressions into their content.

Here are a handful of up-to-date expressions you’ll find in the communications category of the Spanish version (there are plenty of other updated phrases and vocabulary throughout the book but this section impressed me the most) :

I’ll tag you in the pictures.

This is the language of today’s youth (no matter where you are in the world really), so if you’re planning to travel it pays to know it.

Even if you’re learning at home, having a handy little resource for expressions like this is very useful considering the fact that a lot of the interaction in your target language will likely be through online social networking.

Some other excellent features of the Berlitz phrasebooks

Berlitz has always been my personal preference for phrasebooks. Here are some other great pros (some of which exists in previous editions):

There are also occasional cultural notes throughout the phrasebook which I don’t find overly useful or necessary (although other people might). I do however find the few notes about when and how to use certain greetings and expressions interesting and I personally hope to see more of this in future editions.

My shoddy camera work (new camera – couldn’t help myself :)) should give you an idea of the phrasebook’s design:

Berlitz phrasebooks are perfect for chunking

I’ve briefly talked before about my own approach to language learning which is to avoid grammar almost entirely in the early stages and focus solely on the acquisition of meaningful chunks, which is also the approach I apply to my own classroom teaching.

I intend to go more into detail about why I believe it’s the most superior and natural way to learn a foreign language over time but if you’re interested in reading up on the subject then a good suggestion is to start with Michael Lewis’ Lexical Approach here.

Phrasebooks like those from Berlitz are perfect chunk sources.

They contain minimal focus on grammar and hundreds of highly relevant, authentic phrases which are all nicely categorized so it’s easy to find the ones you need.

One of the most handy features is that for many of these phrases the structure is provided along with multiple variables that can be inserted into that structure.

Here’s an example from an older Turkish edition that I own:

The chunk at the top there (“… alabilir miyim?”) can be used repeatedly in a multitude of scenarios by merely substituting a single variable.

No need to overwhelm yourself with questions about grammar in the early stages as long as you have a resource like this full of meaningful bites of language (I’ll talk more about this in future posts).

A Berlitz phrasebook for the pocket change cost of about 9 bucks is potentially a more powerful learning tool than an expensive introductory course product.

Combine this with $8 an hour lessons on italki and you have everything you need to get started on a new language.

I’m not learning Spanish at the moment but I’m so impressed with the sample that Berlitz sent me that I’ve ordered the French and Greek editions for myself.

It’s available in the following languages: