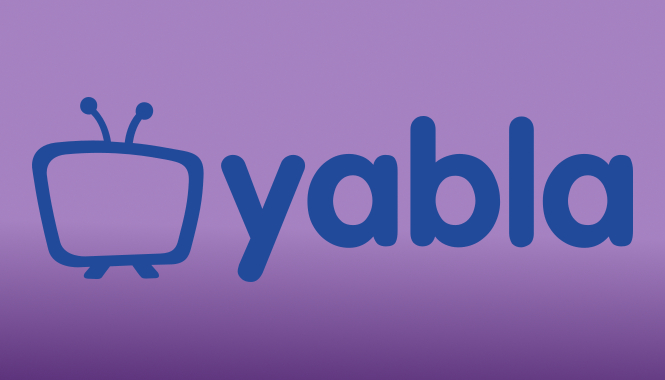 Yabla‘s one of the longest-running multimedia platforms online for language learning (if not the oldest).

In fact, according to its website, it’s been in operation since 2001!

This is an incredibly impressive streak of continual operation for a language learning platform (especially with all the more recent competitors).

I remember when I first started out as a language learning influencer with this blog almost a decade ago, Yabla was talked about then as the one of the best video resources for learning.

Now, it’s estimated that over 80% of consumed Internet content is video (I talked about it here).

Before you read on, here’s my video review:

I’ve decided today to revisit the site and write up a Yabla review.

Is it a different product or has it stayed the same? (I hadn’t personally used it for a long time)


Has it improved much?

As someone who runs a video content provider for Arabic (TalkInArabic.com), I’m very familiar with the rapidly changing availability of video content for language learners.

10 years ago, Yabla would have been a gold mine for content you couldn’t find anywhere else.

Rather than expanding their offerings to include more languages, they’ve remained consistent over the years and focused on improving what they have.

This is a great move in my opinion.

By doing so, they’ve been able to focus on improving and expanding in the market they’ve cornered. These languages also happen to be the most popular and highest-demand languages overall so it makes sense.

Their pricing has also remained amazingly low and competitive (about $10 a month).

I should state from the outset that I’ve had no contact with Yabla for many years.

I wasn’t asked to write this review.

There’s a small affiliate commission on sales I send their way but it’s a negligible referral fee and doesn’t add to the cost if you use a link through my site.

Continue reading for the full review of Yabla and my other alternatives.

Have you used Yabla before?

Comment below and let me know what you think of it.

It provides a mixture of authentic, original videos as well as outsourced videos from YouTube.

But the service that Yabla provides (very similar to what FluentU does) is advanced and interactive video controls.

Yabla is essentially a “video wrapper” – it provides video manipulation that allow you to alter speed, select timestamps and words, and look up definitions of those words.

This is basically the crux of what Yabla is.

I’ve always been curious how sites like Yabla and FluentU are able to sell and market a product that literally makes use of other people’s copyright video content.

How does licensing work?

No idea. But they obviously can and do!

So the Yabla video wrapper takes subtitles off the video itself and puts it on the page, makes them able to be toggled on and off, and allows you to select the words.

There are now games and exercises also built in that interact with the videos too.

Impressively, there are literally thousands of videos available for each language.

So how does Yabla help you learn languages?

As I described, Yabla takes ordinary video and makes it interactive.

The idea is that you’re able to closely listen to and analyze short video segments, highlighting the words in the subtitles to study.

You’ll find buttons to slow the playback of the video (I believe it’s about 0.75x speed), loop playback (basically just keeps looping the segment so you can listen over and over, and skip.

You can enable and disable the target language or the English subtitles (one or both).

But the really useful part is being able to interact directly with the subtitle text, get definitions and save words.

You click on a word in the subtitles and the video will jump to that particular timestamp. At the same time, on the right side of the screen you’ll find various definitions and grammatical information.

I was curious about how they did this for thousands of videos (imagine having to manually input all this info!).

But it seems as though they’re automatically pulling these translations and definitions from external sources (Google, Babylon, dict, etc.).

On each word, you’ll get multiple translations pulled in from different sources.

There’s also a Yabla dictionary which appears to be its own internal dictionary database (I’m assuming in case the machine translations are wrong or missing).

Oftentimes, language products will incorporate what I call ‘fluff features’ to boost their apparent value.

This was a criticism I had of Rocket Languages for quite some time where they had some added games that were just a total waste of time. These features were added into the sales page to boost overall value.

I drew attention to this and Rocket ended up removing them altogether to focus on their core product (smart move!).

I wouldn’t necessarily call them games however — they’re more like interactive exercises.

What I find impressive about the games (fill-in-the-bank and multiple choice primarily) is that they make use of the same player controls and subtitles but simply raise the level of difficulty.

For example, it’ll show the video and subtitles but subtract one word from the text. 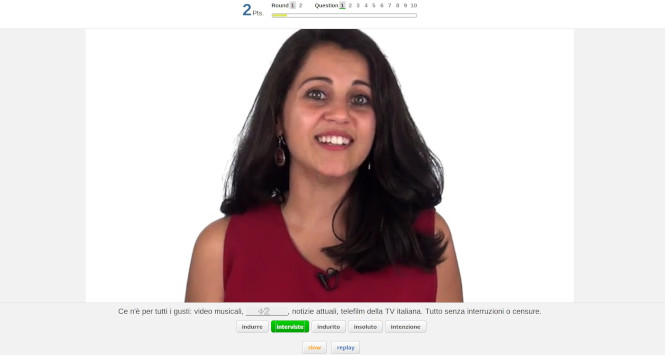 You have to then listen carefully and input the correct missing word.

I say it’s impressive because Yabla is able to leverage the existing interface and technology to push the learner beyond simply ‘watching a video’.

It probably makes the job of inputting exercises for thousands of videos easier for them too.

This runs on a timer and gives the learner a chance to hear the word and select the correct answer.

While it’s nothing flash in terms of design, it’s an effective little tool.

Yabla offers tonnes of content for each language with some variation in the precise amount each offers.

At the time of this writing, you’ll find the following quantity of material available for each language:

As you can see, some languages are more stocked with content than others.

But in my opinion, anything over a few dozen or hundred videos is kind of superfluous anyway – you’ll never use even a fraction of that amount of content as far as I’m concerned.

The content is structured well and easy to navigate. 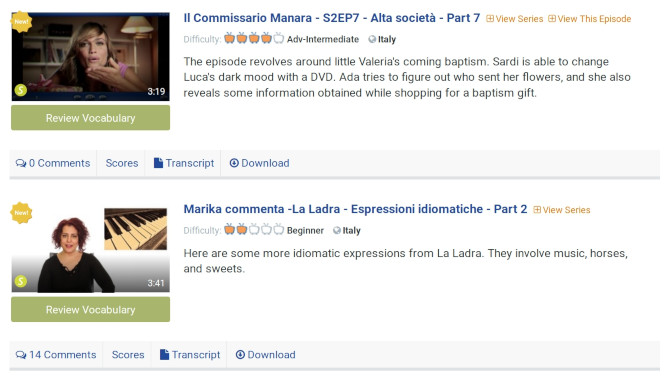 You basically select a level (Beginner, Intermediate or Advanced) and filter the videos by topic category.

There are loads of categories that seem to align closely with the YouTube categorization of videos and movie genres.

On the small video thumbnail, you’ll see an ‘S’ icon for most videos.

This icon indicates that they are available to subscribers only.

One of the more superficial criticisms I see a lot is that Yabla is outdated.

It’s a fact that Yabla is built on an older web framework and has an older UI design. 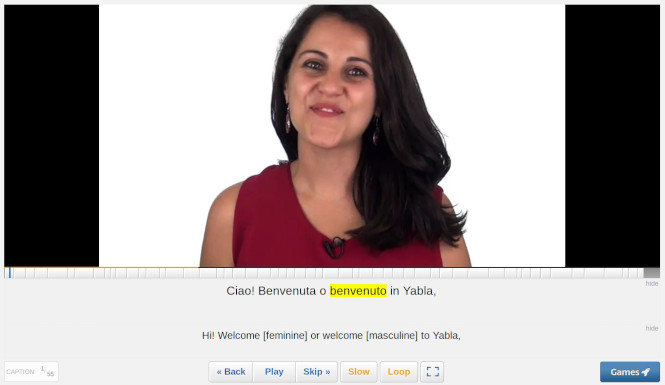 Aspects of the site are visually reminiscent of some older educational platforms a decade or so ago (e.g. button design, colors and so on).

But as I said, this is superficial.

While it would be nice to have a Material UI or something sleek and trending, the design itself does not subtract from what it does.

I’ve yet to run into any actual issues using Yabla where the design caused errors or made the site difficult to use.

The tool works and that’s all that really matters at the end of the day.

I actually wrote an article a while back about the ‘dumbing down’ of language app interfaces and how new sites are being designed as though we’re all children (e.g. Duolingo).

Yabla does a good job at proving that a site can remain thoroughly useful without the eye candy.

What makes Yabla stand out after all this time?

Honestly, I’d say the sheer amount of content that they have.

As I’ve alluded to above, each language on Yabla offers literally thousands of videos at all levels.

They’re short (which is perfect) and the size of the library of content ensures that you’d probably never run out of content to watch and learn from.

Yabla’s interface is incredibly easy to use and navigate as well.

Having so many videos in your library presents the added challenge of making navigation work well.

Yabla has done a great job at making it all accessible.

Pricing and other video platform alternatives

Yabla is still very competitive in terms of pricing.

You can get full access to your target language video content for around $10 per month which is peanuts.

NOTE: You only get access to your chosen target language — not all 6 languages which would require a separate subscription for each.

There’s a slight discount for semi-annual or annual payments up-front ($55 for a half year or $100 for a year).

This all includes a 2 week cooling off period if you’re unhappy (but no trial option).

I say this pricing is competitive because most SaaS language subscriptions (e.g. Glossika, FluentU) tend to go as high as $30 per month for what they offer.

In terms of exact alternatives to Yabla (products that basically do the same thing), there is really only one available at this time: FluentU.

I believe FluentU was inspired by Yabla originally but it’s been around for quite some time.

There are two possible advantages to choosing FluentU over Yabla in my opinion:

So if you’re learning Russian, Japanese or Korean, then it’s an obvious choice.

Yabla is restricted to the 6 languages they have.

If the older design of Yabla is an issue (it shouldn’t be), then FluentU might be more appealing to use as well.

The other point worth mentioning is that Yabla seems to have a good mix of YouTube-sourced content and their own content whereas FluentU is 100% reliant on YouTube.

At the end of the day, Yabla is significantly cheaper.

In terms of great video content that does not work exactly the same way Yabla and FluentU do, I would highly recommend the Innovative series.

You can select a language here to learn more about them:

The videos vary in quality and type but overall it’s an excellent resource for most languages.

Conclusion: Yabla has retained its usefulness and value after all these years

As I said at the start of this review, Yabla has been around for almost two decades.

That makes it one of the longest running multimedia platforms for learning languages and the first of its kind (that I’m aware of).

Despite a clunky and fairly dated design, Yabla’s functionally excellent.

The content for all languages is varied and topically relevant, and the interactive player is excellent.

While there are some great alternatives (see here) around, Yabla is still the most competitively priced for all that it offers.

Like all great resources, I would recommend Yabla as a supplemental resource but using it alone will not be adequate.

Select a language to sign up for a Yabla trial here: