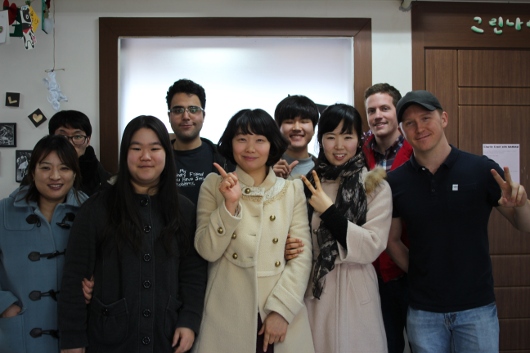 Update: Before I go any further, one site I relied on heavily when I started Korean was this one.

It’s one of the most comprehensive audio-rich tools I’ve seen anywhere for studying Korean.

If you’re just starting out with Korean or planning to move to Korea then this post today will help you.

I’m going to share a handful of fundamentals and things I’ve observed here that I believe everyone should be aware of when tackling the Korean language (some of it’s more cultural rather than language related).

I’ve been here in Gyeongsangbuk-do, South Korea learning the language now for an average of 4-6 hours a day, almost every day for the last 5 months (determined to be very fluent by the end of my 12 month teaching contract).

As I’ve said often before, my approach consists of roughly 15-30 minutes a day of actual study, focusing primarily on repeating natural dialogues and the rest of my time speaking with native speakers as much as possible.

Even though I’ve been heavily devoted to learning Korean, I write this as a new, fairly inexperienced Korean learner – by no means an expert.

If you’re experienced with the Korean language and culture feel free to add your own input in the comment section below. 🙂

The absolute best and most comprehensive course I’ve seen so far anywhere for natural Korean dialogue is one called Rocket Korean.

And the best part is it’s significantly cheaper than other household-name language courses.

The reason why I say it’s the best I’ve seen is that it focuses on teaching you very natural Korean conversation and covers a tonne of relevant topics.

Here’s what the authors say about it:

“It consists of tons of audio lessons, with each track averaging over 25 minutes in length, that are designed to train your ear to Korean and prompt you to speak and respond to your tutors, Sujung and Taewoo.”

The way people talk in the audio is extremely easy to follow and detailed, and it’s there’s an app version on iOS and Android.

I wish I’d known about Rocket Korean when I was just starting out with Korean myself.

I mentioned a little while back that I had an incident where I tried to ask a middle-aged woman here for her name (just trying to introduce myself) and she wasn’t too happy about it.

Since then, I’ve learned a lot more about why this happened.

Even though at first glance Korea is very heavily influenced by Western ideas, there are so many layers of complexity in the way that Korean people interact with one another based on numerous social factors and this is reflected thoroughly in their language.

For me as an Australian this has been a huge learning curve.

In a country as egalitarian as my own, I could hypothetically meet a millionaire CEO for the first time who is twice my age and we’d still call each other ‘mate’, introduce ourselves by name and sit down for a few beers to chat about our personal lives. There’d be nothing unusual about it.

For most Koreans this would be absolutely inconceivable.

I’ve observed even in my own workplace here a real, deliberate distance kept between the 원장님 (director/boss) of the school and the employees. I have a great boss who is lovely but because of the difference in status there’s an almost tangible feeling of reverence and separation between her and the staff.

Foreign teachers don’t always understand this and will often talk to their directors as equals which I personally believe contributes to many workplace problems and terminated contracts here in Korea.

As far as the language is concerned, most Korean course material will focus on using the polite -요 ending which is simple enough to get your head around.

The tricky part however is understanding the way Koreans use honorific infixes when talking ‘about’ someone of a higher status. You could be using casual speech when talking to your friend but if you start talking about your mother for example, the base of the verb changes as a way of showing her respect even though she isn’t physically there.

There’s even honorific vocabulary where completely different words will be used to show higher respect.

I’m only just now starting to implement some of this in my own conversations but it helps to be aware of how important it is as you’ll hear it a lot.

I still innocently use casual speech (반말) every day even when I’m talking to old people and they’re usually just happy to see me making an effort so don’t stress too much about it.

As a general tip, remember that you’re a foreigner and people don’t expect you to know it all.

Be aware of honorific forms so that when you hear them you’re not as confused but my advice is to worry about them after you’re comfortably using the language.

As a follow-on from that point, get into the habit of referring to people by titles rather than names and avoid personal pronouns.

This relates not only to your workplace but in just about every setting.

I mentioned the title of director above (원장님), and you’d refer to your teaching colleagues as 선생님 or 샘 (which I think is a Gyeongsangbuk-do dialect shortening).

In fact, you can refer to people generally as 선생님 as one way of showing them respect (even the fellas at my gym who speak quite casually with each other address each other with this title).

I’ve seen a few instances here in Korea where foreign teachers innocently address their boss using their first name in Korean and the reaction they get for it. I don’t recommend you do this!

Even though they may be used to foreigner ignorance it’s best not to risk souring your professional relationship over it.

Use their English names or address them as 원장님.

There are plenty of other titles for other positions (as well as age-related titles that every course book explains) but these two are the most relevant for ESL teachers.

A quick word on adjectives in Korean.

Adjectives (e.g. describing words like big, pretty, yellow, crazy) are not really the same as we understand them in English.

With Korean you need to think of an adjective as an ‘active state of being’ – a verb.

If you keep this in mind, sentences will make a lot more sense from the outset.

The way girls and boys talk in Korea

In every society there are significant gender-specific differences in the way people speak.

It may be a contentious issue for some people but the fact remains, girls and guys do tend to speak differently pretty much everywhere – even in English-speaking countries.

Some people would argue that it comes down to societal expectations (e.g. a man who uses feminine expressions or a woman who uses too much profanity are perceived negatively in many places).

Where I come from in Australia for example, to hear a woman use vulgar profanity like the word ‘c**t’ or speaking with a strong, broad accent is generally not well perceived at all, whereas this kind of language is pretty much part of the everyday vernacular of working class blokes (still a bad word though).

In the same way, certain terms are more likely to be avoided by men (especially where I’m from).

Whatever your opinion on the matter, the fact is it’s a feature of every language and culture.

For this reason, when learning a foreign language it’s something you should take into consideration when trying to learn how native speakers communicate.

So I started lessons with an excellent new teacher that I found through italki recently and the first comment she made about my Korean was, “You spend a lot of time with Korean girls, don’t you?”

I said, “Yea, my co-workers and most of my friends are female. How’d you know?”

She said it was obvious by my choice of certain words, politeness forms and my intonation that most of my language input had come from women.

I’m told for example that Korean men use the honorific forms more often in conversations and that as a male I should make sure to use them from time to time (I’m sure there’s an explanation for why this is the case).

There are several ways to say “very much” or “really” in Korean as well and according to my Korean teachers, men tend to say 진짜 less than girls and kids (정말 is preferred).

If an experienced learner can share some input on this or more examples it’d be much appreciated. 🙂

One thing you’ll hear a lot in Korea is this ‘cute’ whine that women often do (cuteness seems to be a generally desirable trait here in Korea for girls especially).

Here’s a good demonstration of it:

Take a look at this simple example:

It’s a common enough conditional statement in English that we’d normally use 3 words for but 가시면 is a single word in Korean: go + honorific infix + conditional suffix (the subject is implied by context and use of the honorific).

Put very simply, a common feature of agglutinative languages is that many expressions are single words that have several affixes – units of meaning (morphemes) that represent what we would use as isolated words in English – prepositions, method, number, conditionals and so on.

The example above is basic but in some agglutinative languages there can be many affixes that create really complex expressions (in some languages a one single word can translate to a long sentence in English).

We do have some similar features in English as well – the ‘s’ in ‘friends’ is a suffix making it plural. We don’t really use infixes in English except when we say made up terms like ‘abso-fucking-lutely’.

Having learned Georgian two years ago I had a bit of a head start but I can see how someone learning Korean as their first foreign language would find it confusing if they didn’t know anything about it.

Starting off with a general awareness of how these languages work will help you make sense of Korean a lot faster.

Definitely a rewarding language to learn

The more time I spend with Koreans while learning this language, the more I’m falling in love with the place and not wanting to move on to my next destination.

It’s been such a rewarding experience and I’m glad I’ve put in all the time I have so far. Be encouraged to stick with it!

If you can add to what I’ve said here then please share it in the comment section below. 🙂

Visit my Essential Language Learning Tools page for other great Korean resources to help you.