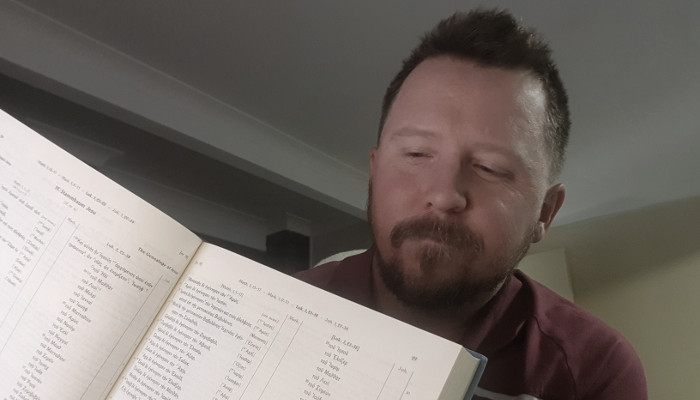 A few people have asked me what are the best books for learning Koine Greek.

Or at least what resources I use and recommend.

So today I’ll share the ones I personally prefer with you in case you’re starting out with Koine Greek or unhappy with your college’s choice of textbook.

There are some fantastic books out there, some mediocre and some that I wouldn’t waste money on.

In addition to quality books, I’ve mentioned before that I also use a free, open source tool called Learning With Texts + native Greek audio that I found online to ‘assist’ my reading of the New Testament text.

But for now, here are the 5 resources/books that I recommend you own as a Koine Greek student.

For a comprehensive, linear textbook on Greek, it doesn’t get much better than this.

This was actually my first Koine Greek textbook back in college and to this day, I still have not come across anything comparable.

It does a great job of being concise yet comprehensive in each chapter.

However, the 3rd edition has a separate listening component that is well worth it.

That’s Synopsis of the Four Gospels in Latin.

This book should be on every theology student’s desk.

For people starting out with Greek, it may be a little unclear as to the book’s intended purpose but once you understand what it’s designed for, you can’t imagine not having it in your toolkit.

It basically does a side-by-side comparison of each of the four Gospel texts – in Greek – so you can analyse the fine differences between them.

In many cases, a column may be empty if a particular story or passage doesn’t exist in all Gospel accounts.

Often, a story may exist in all Gospels but be written completely different in Greek. Or there may be clear linguistic indicators that two texts are borrowed from each other.

But here’s where this book is even more amazing:

So you’re able to compare Apocryphal and post-Acts versions as well.

I can’t recommend this book enough.

Even if you’re a brand new Greek student, this is one you should grab as you’ll probably be referencing it for the rest of your life.

Dobson’s book was actually recommended to me by a reader of this site a while back and I’m really glad I took the time to use it.

It’s a very different teaching style that gets away from memorizing endless rules to translate.

Instead you jump right into the text and start looking at patterns (he also covers chiasmus early on).

Dobson is probably the closest thing to the approach I take in my foreign language learning – learning languages through lexical chunks rather than dry grammar memorization.

Some people may not like the approach in which case I say use the Learn New Testament Greek alongside another textbook.

It also comes with audio.

Mounce is not as good as Wenham, in my opinion.

But some people find Wenham’s text overwhelming or overly ‘dry’.

Basics of Biblical Greek Grammar is a great textbook choice for students looking for clear explanations of grammatical topics in Koine Greek.

It’s definitely more of a primer for new students, however.

You’d want to move on to something a little more in-depth after covering Mounce.

Dobson + Mounce is a good combination. I’d also recommend getting the grammar cheat sheet in addition to the textbook if you can (there’s a Koine Greek combo pack that includes audio and the sheet for reference).

I’ve found it super helpful as a reference.

5. A Greek-English Lexicon of the New Testament and Other Early Christian Literature – Walter Bauer

This is a brick of a book but there is absolutely no comparison for NT Greek lexicons.

If you’re serious about Koine Greek, it’s imperative that Bauer’s lexicon be on your bookshelf.

There’s another mammoth lexicon by Liddell and Scott but I’d only recommend it to students studying other ancient Greek texts in addition to Koine.

I’ve been using Walter Bauer’s lexicon for decades now and it’s been an absolute gem.

Like the Synopsis Quattor Evangeliorum, this is one of those tools that you’ll use and reference repeatedly for many years post-study.

Okay, so I decided to add one more here which I think is fantastic.

Just as in learning to speak a foreign language we look for wide variety of listening material to get exposure to, it’s important to do the same with NT Greek reading material.

The problem with pretty much all textbooks for Koine is that all you’re doing is constantly translating NT texts.

This Koine Greek Reader gives you the opportunity to add flavor to the material you learn from.

Instead of just translating passages, you can learn by reading a variety of other texts including the Septuagint and early Church fathers.

I admit I haven’t had the chance to sample every single Koine Greek book on the market (not enough time!).

But I’ve seen a good majority of them.

Obviously, it should go without saying that you need a Greek New Testament on hand before anything else.

There are some newer textbooks that (in my opinion) look nice but don’t bring anything new to the table in terms of the approach they take in teaching Koine.

Ultimately, the resources you use and even the teacher are secondary to your own determination and daily exposure to the text.

Have I missed an excellent Koine Greek resource?

Tell me about it in the comment section below.