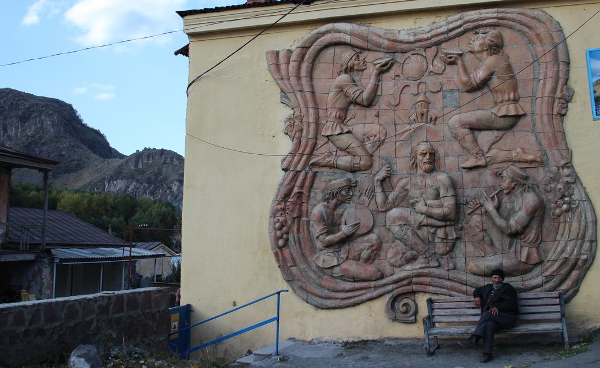 Today we have a guest post (and different perspective!) from Pat Goodridge who hails from Philadelphia, USA.

Pat’s a senior at the University of Pennsylvania, where he studies linguistics and works in his spare time for a new Russian language-learning site, 3ears.com (a tool that I’m really hoping succeeds as I think it’s excellent!).

He loves to study languages and run his Facebook page for linguistics majors, The Linguist Lattice. A native speaker of English, he’s also fluent in German and Russian, has studied Turkish extensively, and has a basic understanding of Spanish, Hungarian, and two of the Central Asian languages (Kazakh and Uzbek).

Over to you, Pat!

I arrived home from my first semester of college in late December of 2012 having been through the freshman ringer.

My grades were lackluster and spelled little hope for the tougher courses to come. My old dorm situation was history; I had moved out after the first semester to flee rambunctious roommates and learning-devoid social conditions.

I had played the fraternity game, party-hopped, and focused more on chasing girls than chasing A’s.

But as a sensitive, thoughtful liberal arts man at heart, I found it increasingly difficult to find some semblance of belonging at an elite engineering school. I was tired, lost, and ready for some change to find its way to me.

It did, in the most unlikely of places.

While scouring YouTube for videos about the Cold War, a topic in history I’d always found intriguing, I stumbled upon a 90’s Dallas School District video course on Russian. It was entitled “Russian World”, and dazzled me with the VCR-style cinematography I loved to see in old documentaries.

The gentle and soft-spoken Vera Polyakova-Norwood was its host.

Vera hailed proudly from St. Petersburg, but her years as a Texan had given her accent an accent with a distinctly melodious Slavic-Southern feel.

Even with all the newer Russian learning content on Youtube and elsewhere, what drew me to Russian World was the astounding robustness of the course; three years worth of lessons, totaling almost 100 hours!

Interestingly, it was the combination of my solitude and time spent alone with that course that shaped my early experience of learning the Russian language and culture, not any interaction with a native Russian speaker.

This would mark what was for me not only an introduction to the Russian language, but to the wider, endless resources for language learning found online.

Studying Russian that winter was the most productive, the most challenging, and the most rewarding process I have ever experienced.

It was the most rewarding because it taught me the most important lesson about language learning: To understand a language deeply, one must focus more on study done with oneself than on speech done with others.

Language learning as a social process

The process of learning a new language is often thought of as a social one.

Like many social processes, such as approaching an attractive person in a bar or expressing concerns to superiors at work, language learning invokes traditional notions of leaving one’s “comfort zone”.

Namely, it involves immersing in a new foreign culture and speaking to people from a different background using inferior language skills that will be flawed for some time (often to embarrassing effect!). To reach even an intermediate level in an unfamiliar tongue not only asks that one expose themselves to the uncertainty of a social exchange, whether among peers in the classroom or with locals on the streets of a foreign metropolis, but demands it.

It demands it many times over, in fact.

These steps to expand one’s breadth of knowledge and understanding no doubt involve a certain level of discomfort, one that is fundamental to anything so removed from most people’s everyday life as is exercising skills in a new language.

Though expressing oneself in another language is exciting, uncertainty and self-doubt can make it feel like a leap of faith for some.

I remember last year when some friends and I sat down at a Turkish restaurant during a visit to Princeton, New Jersey.

I adored Turkish cuisine and couldn’t wait to order my favorite dish, manti (Turkish dumplings). My friends, however, were more skeptical, overwhelmed by the unusual blend of meat and vegetables on plates of akçaabat meatballs and döner kebab.

They stared hopefully out the window at the Chinese restaurant across the street, longing for a foreign cuisine to which they were more accustomed.

I was outvoted by my two friends and we decided to leave before ordering.

Though I hadn’t studied Turkish in months, I felt the need to redeem myself by speaking some Turkish to the staff.

I turned to the waitress to thank her and feverishly uttered “Merhaba!”, then watched her smile awkwardly in response. I walked away proud of my cultural empathy, but made only a few steps before a wave of embarrassment wafted over me.

Slapping my forehead, I realized I had just said “Hello” instead of “Thank you”.

I couldn’t help but feeling as if just thirty more seconds of studying basic greetings and manners may have made that a moment of connection instead one of confusion.

Languages are a marathon, not a sprint

This view of language learning, the social one, overlooks what in my language-learning career has been an even more critical element – the study side.

It is on this study side that the key element is not discomfort as on the social, expressive, risky side, but comfort.

This description contradicts everything Americans believe about language learning: that it is boring, tedious, and difficult.

But I believe that when embraced, the value of comfort, of a sustained feeling of harmony and pleasure throughout the learning process, can propel learners to unprecedented levels of success in their target language—just not right away.

This delay of gratification, and of immediate results, is becoming less fashionable in our culture.

It is what repels so many away from the mere thought of making word lists, seeking out a penpal, or listening to hours of incomprehensible foreign speech to try to decipher patterns (“Brain soaking”, as Australian psychologist Chris Lonsdale calls it).

While teaching programs that promise the process to take anywhere from six months, to two months, to ten days would have us believe that the race to learn a language is a sprint, it is far more analogous to an ultra-marathon.

He paces himself, learns to love the process, and, above all, does it all on his own.

Famous language learners such as Julien Gaudfroy, who devoted five years to becoming native-like in Mandarin Chinese, can attest to language mastery being a long-term undertaking, but one the language learner must nonetheless learn to love. Gaudfroy was a concert cellist in Paris, adept at using focused practice to become world-class.

When he sustained a career-ending injury at age 20, he decided to devote his auditory talents to mastering Chinese pronunciation.

This has led him on a decade-long rise to media fame in China.

If one is to spend years doing anything, whether it be learning a language or learning to draw, finding comfort in the task is increasingly essential with increasingly longer time commitments.

The importance of long-term comfort and a relaxing environment will come as no surprise to the seasoned scholar.

Any exemplary student of any discipline knows that one of the upsides of studying is the freedom to customize the process to make it most pleasurable, productive, and consequently comfortable.

This creates a sort of zone for the language learner, not unlike what psychologists call a “flow state”.

It does so by allowing for the three most important components of language learning: longevity, mental stamina, and enjoyment.

So to become a truly great speaker of any language, beyond levels of mere everyday use, one must master this second type of learning, studying. The greatest gains made by this type of learner will not be in cafes, conversation with a significant other, or even classrooms.

Rather, they will come during solitary, focused study.

They will be during the gradual undertaking of reading, recitation, and revising that constitute real, deep language study. While this may seem counterintuitive in the face of passive language acquisition in childhood, a wholly social process, it is in fact a massive advantage to second-language learners to be able to engage in active study.

This is an issue that’s examined elsewhere in the language-learning community.

Whether your preferred study method is flashcards, the Goldlist Method, or just casual reading, establishing comfort, in both body and mind, is key to not just excellent language skills, but to deep understanding.

So I’d encourage you: slow down, soak in, and get back in your comfort zone.