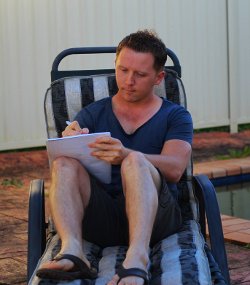 Almost exactly six months ago I announced my plans to learn Gaeilge on my own using online resources with no prior knowledge of the language at all.

This is the first minority language that I’ve ever attempted to learn and despite my initial frustration with finding resources I can now say that there is actually more than enough available for Gaeilge in comparison with many other minority and endangered languages (I reviewed one such resource here).

Online conversational materials for indigenous Australian languages are virtually non-existent for example (something I’d like to help change in future).

My original plan with Irish was to only use completely free websites to teach myself but I broke this rule and went ahead and bought a few books which helped immensely.

Three months after my announcement I uploaded this video and recieved some really great feedback and tips from native speakers. I haven’t received any discouraging comments which is great.

I’ll put together a 6 month progress video this week (time permitting) and post it to the Facebook.

I know there are some people out there who have an input-only period of months or years in the beginner stage and won’t speak until they’re confident enough but in my opinion that’s excessively long.

It’s fine if you just want to be literate or translate documents but if you want to eventually speak the language then you really should find opportunities to practise early on.

In saying that, I like to keep an input/output ratio of 80:20 early on.

It’s good to be spending most of your time listening (and reading) for comprehensible input but at the same time ensuring sufficient amounts of actual practice.

The reason why I put so much weight on input is because this is how you build up your mental ‘database’ of lexical chunks and vocabulary so that when you do actually speak you’ve got something to say.

There’s no possibility of having a creative, meaningful or opinionated chat about anything if you don’t have a lexical well to draw from so to speak.

Refine your speaking ability over time

So let’s say you take my advice and spend 80% of the time focused on input while ensuring sufficient speaking practise.

You understand a lot of what’s being said (the hardest language skill to master) but when you speak you’re a bit slow and your speaking skills aren’t really an accurate indicator of how much you do comprehend.

Even though you’ve got the vocabulary there to talk about most topics it takes a little while for you to actually say what you want, but regardless of how slow it is initially you can and do produce it eventually.

Your conversational ability is far more likely to rapidly improve than a person who has had plenty of practise with basic introductory phrases and topics but has a severely limited lexical database to work with.

I was like this on my first trip to Egypt.

I could introduce myself, talk about my family and so on with ease, and people would hear me and say “You speak Arabic really well!” Then they’d go on and start to talk about other topics of which I just couldn’t participate in. They quickly saw that I knew how to say a few things really well but beyond that I knew hardly anything.

I didn’t have sufficient language to join in any further.

Now, had I of applied this 80:20 listening/speaking ratio in the 6-12 months leading up to this I would have had a lot more to say even if it was slow and broken – the language would have been there in my mind for me to retrieve and use.

You can’t retrieve words and phrases from your memory if they aren’t there to start with.

Speed/fluidity in speech is something that comes over time but it’s even better if you’ve actually got lexical content to drawn on.

The wonderful feeling you get when you notice progress

Since the very first day I started on this challenge to learn Irish I’ve been religiously watching a soapy called Ros Na Rún on the TG4 website.

I’m almost ashamed to say it but I’m addicted to this show now! 🙂

You normally couldn’t pay me to watch shows like this in English but I’m now checking the site frequently for new episodes.

Anyway I had this moment two weeks ago while I was listening and taking notes where I suddenly realized that my level in Irish had reached a new and very exciting level. I noticed that I was following parts of these and other series without resorting to the subtitles and things were just feeling more natural to me.

So I decided to test myself by trying to talk about a few random topics and I noticed that although I was still slow and choppy I was able to recall much of what I’ve learned even though I’ve not yet had a chance to use it.

It just confirmed for me what I already believed to be the case which is that input more than anything else determines progress.

I know that when I arrive in the Gaeltacht (the Irish-speaking regions of Ireland), even if my speech is a bit sloppy and unrefined, I’ll have a wealth of language to work with already.

Finally, I thought I’d post this insightful video that Steve Kaufmann put up in reference to his own progress with Czech where he used a clever snowball analogy:

Eventually we have to speak and when we speak, we struggle. But the bigger your snowball, the more words you have, the more you understand, the more comfortable you are with different aspects of the language – the better you’re going to do when you start to speak.