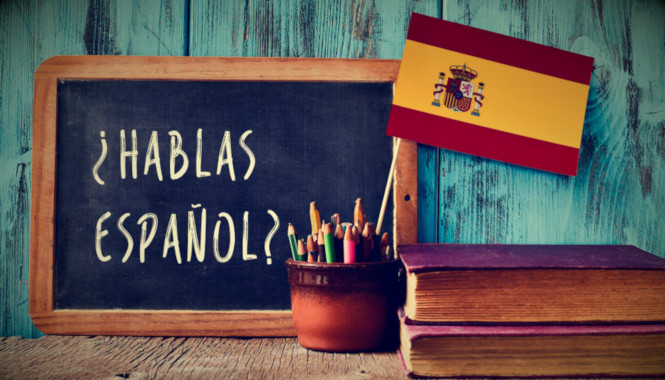 
Do you want to learn how to count in Spanish? Today I’ll teach you all the numbers in Spanish from 1 to a million (and more).

Okay, maybe not every number. 🙂

But I’ll show you how to calculate the bigger numbers easily as well as count from 1 – 100 in Spanish.

As an added extra, I’ll also show you tips on memorizing Spanish numbers and some awesome resources.

In a hurry? You can jump to the different sections here:

Are you here just looking for a quick reference of some basic Spanish numbers? No problem.

Here you’ll find a quick list of the numbers zero through twenty.

If you’d like the higher numbers or to learn more info, keep reading! 🙂

These are the Spanish numbers 0 to 20 for the impatient:


The origin of Spanish numbers (and closely-related Romance languages)

Here’s a small Spanish word history (etymology) lesson for you.

Spanish belongs to a family of languages called Romance languages.

These are languages like French, Italian, Portuguese and Romanian which are all descended directly from Latin. Obviously, this goes back to the time when the Roman Empire was spread out all over Europe.

Here are the original Latin numbers (1 – 10) that they all derive from:

Portuguese (being geographically so close) is probably the closest with a few slight differences.

French may sound less similar because the pronunciation is so different but when you see it written on paper, you can immediately spot the connection.

Take a look at these popular Romance language comparisons of numbers 1 – 10:

How does etymology help you learn Spanish?

If you’ve already learned or been exposed to these linguistic cousins then you basically already know Spanish numbers (kind of!).

You could almost say that it’s just a matter of learning new pronunciation and spelling for the most part.

And if you decide to learn Italian or French after Spanish, you’re already most of the way there! 🙂

But even for monolingual English speakers who have never learned a foreign language – you’ve already encountered all of these Latin-derivatives in some form or another. For example:

The Spanish numbers 21 – 29 appear a little different to the higher ones (31 onward).

I’ll explain the other ones in a moment but just know this:

So instead of writing it out like this: veinti y uno, it’s just veintiuno.

This makes sense when you consider that it would basically sound identical in natural speech anyway.

So in terms of what you actually hear, there’s no difference really.

The tens in Spanish numbers

These are the tens units leading up to 100 in Spanish.

From 30 onward, adding ones to these tens is really easy and straightforward. So, we’ll list them below but they’re quite repetitive as you can see.

NOTE: The rules change for numbers over 100. I’ll explain in a minute if you keep reading.

You’ll be counting to one hundred in Spanish in no time at all. 🙂

Before I go on, I’m going to take a moment to introduce Spanish ordinal numbers.

The numbers I’ve shown you already are what’s called cardinal (aka normal) numbers. For example: one, two, three and so on.

Like the cardinal ones, they’re very easy to learn BUT there are some grammatical considerations to keep in mind which I’ll run through.

Just like in English, there are clear suffix patterns you can follow (and exceptions you just have to learn regardless).

It’s often confusing for learners of English to remember -st, -nd, -rd, -th and put them on the appropriate numbers.

The first two in Spanish: primero and segundo (1st and 2nd) are easy to remember.

Primero is related to primary and segundo actually sounds very close to second.

Tercero is a bit different since the letters switch around (but so does third in English!).

The others up until 11 are fairly straightforward to memorize but you’ll notice that 11 and 12 are different to 13 onward. 11 is literally one + ten and 12 is literally two + ten.

This changes at 13 however, which is literally ten + third and so on.

But again, if you compare this to English it’s not that far off. In English, eleven and twelve are very different to the other teens (e.g. we don’t say oneteen or twoteen!). 🙂

With ordinal numbers, just keep in mind that your numbers need to agree with the gender of the object you’re counting.

Just like any adjective – the gender must agree (although, you can probably see that unlike other adjectives, ordinals come before the noun they’re describing).

From here on it just gets easier and easier! 🙂

100 is simple – just think cent+ury (take off the –ury). Just note that the -to ending is only used when counting.

700 and 900 have insignificant spelling variations too.

Don’t get hung up on spelling for exceptions like this. Just remember that it’s simply because quinientos is much easier and more natural to say than quincientos — it rolls off the tongue easier.

So, there’s an easily distinguishable pattern for the multiples of a hundred.

Going beyond this, you can then easily create other numbers by combining these multiples of a hundred with the numbers I taught you above.

IMPORTANT: Unlike English, you don’t need another and (y) between the hundreds and tens. Same goes for thousands.

Is that super easy or what? 🙂

Spanish numbers: 1000 right up to the millions

From here on, it really is just a matter of combining everything you’ve learned so far.

Once you get the general patterns down, you’ll just have to practice saying long numbers until it becomes totally natural to you.

It’s pretty much the same logic as the hundreds but it’s actually even easier because the words don’t join together.

You just simply put the number before mil.

Follow or begin that with whatever combination of numbers you want (which I’ve shown you) but no alterations or exceptional spelling needs to be learned (yay!).

So the only other word I need to teach you is un millón -> can you guess what that means?

It works in pretty much the exact same way as mil except multiple millions are millones and ‘one million’ requires the article. So let’s take a big number a break it down:

Tips for memorizing these and other vocabulary

Here’s some general advice that will help you retain Spanish vocabulary, including numbers.

The temptation is always to try and memorize them as lists.

This is intimidating to most people and frankly a terrible way to learn anything.

In fact, just looking at all these tables of numbers is probably making you think:

“How the heck am I going to remember all this?”

There are two things I want to advise you to do:

1. Familiarize yourself with patterns.

I’ve already pointed out several of them throughout this article.

Pay attention to suffixes and the flow of words that connect together. A good example is the one I mentioned above for combining tens and ones:

Once the pattern becomes familiar to you, all other numbers that follow the same pattern will instantly make sense.

2. Focus less on the literacy aspect (reading and writing) and more on the sound flow

Spelling can be a real hindrance for new learners.

If you spend more time on the actual sounds themselves, you’ll pick these numbers up a lot faster than you will if you try to write them all out.

The written form of that number is intimidating, right? It looks hard.

But just listen to it for a moment.

It actually sounds just like the number that it is: twenty-six.

Spend less time trying to read and write and more time listening and ‘getting a feel for’ the numbers.

There are so many great resources out there for learning Spanish.

You’ll find a pretty detailed list in on the Spanish resource page but in case you’re in a hurry, here are a couple of great ones:

SpanishPod101: If you like learning with podcasts, this is excellent.

It’s arguably one of the most popular platforms for learning Spanish these days and has a massive library of expanding content for Spanish learners. Best of all, it’s very affordable.

Rocket Spanish: This is one of the most comprehensive online courses for Spanish.

This is different to SpanishPod101 in that it offers a very structured, linear format taking you through each lesson from start to finish. For someone brand new to Spanish and an inexperienced language learner, it’s ideal.

italki: Not for Spanish specifically but this is hands down the most useful tool available for finding conversation practice, tutors or teachers online.

Can’t travel to Spain or Latin America? No problem. Book an inexpensive session through italki (many are less than $10 per hour).

Glossika Spanish: This is a very unique platform that teaches Spanish fluency through spaced-repetition of sentences.

One of the most popular and innovative courses available today.

It’s available in both European Spanish and Latin American Spanish.

Did you find this article helpful?