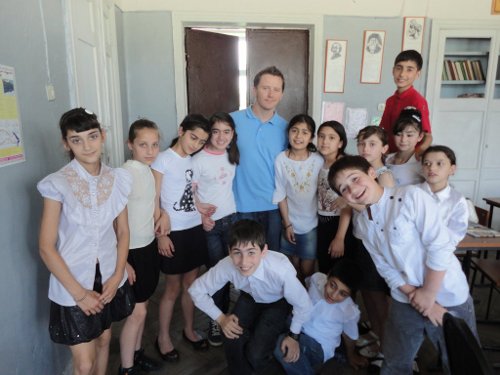 This is slightly off the topic of language learning but it’s in response to a few questions that have been thrown at me now and again regarding ESL teaching as a means to fund immersion stays abroad.

It’s also been on my mind a lot lately as I’m currently in the process of organizing my transition over to South Korea to work as a teacher.

Many people are eager to live overseas in an immersion context (whether it be for the purpose of learning a language, employment or humanitarian work) and in my opinion ESL teaching is a far better option for native English speakers than translation work or freelance writing/blogging.

One of the reasons why I say this is that in order to be successful in either translation or freelance writing you need to spend a lot of time (too much time) in isolation, working in front of a computer screen rather than spending it with people.

It’s a lonely and at times financially unpredictable way to live (UPDATE: I recently put together a list of great job alternatives for travel and languages here).

With ESL teaching on the other hand your job requires you to interact with students and colleagues on a daily basis, and despite the fact that teaching is done through the medium of English you still have plenty of time in between classes to chat with people in your target language as well as increased opportunities to build friendships that extend outside of the workplace.

It’s financially consistent (as long as you don’t work for a bad employer – see below), very sociable and you get to maintain routine.

This is not to say that the things I’ve listed here are the only three options for anyone wanting to travel and earn a living at the same time.

In my travels I’ve met doctors, engineers, and other professionals working abroad but these are the more common and easily achievable avenues for globetrotters.

NOTE: I highly recommend starting a blog and earning from that if you plan to travel. Even if you’re teaching in a place like Turkey where wages are relatively low, the extra income made through your blog will help a LOT.

I explain how to do this here.

I worked for three employers last year as an ESL teacher: the Ministry of Education and Science and the Ministry of Internal Affairs of Georgia (the country not the state), and a private language school in Eastern Turkey.

Despite the tolerable, mild incompetence of the TLG program in Georgia they were actually very good to us foreign teachers (even the scumbag teachers who deserved to be sacked were treated well) and consistently paid on time. For a country still healing from fresh wounds of poverty and war they’re doing a fantastic job for which I’m really thankful for.

My experience in Turkey was a bit different.

I already briefly mentioned in a previous post what happened there toward the end of last year. We’d finished up in Georgia, spent a nice relaxing holiday catching up with friends in Italy and driving up the coast of Portugal, and then headed over to Malatya, Turkey to start work at a privately owned school where we were initially quite satisfied with the working conditions.

I started learning Turkish, made friends through work and began to settle in.

Shortly after we’d started working at the school however I got a sudden phone call from my family in Australia saying that my grandmother had been diagnosed with a very aggressive cancer and I had about 8 weeks to get home and say goodbye to her. It was one of the hardest emotional challenges I’ve ever had to go through.

I told my new Turkish employer the story, told him how sorry I was for my need to leave quickly and that I’d try to return soon after, left my girlfriend there and went home.

Without going into too much more detail there were a series of major issues that made it impossible for me to go back to Turkey so I had the dilemma of telling my Turkish employer that I wasn’t coming back and then trying to get my Canadian girlfriend over to Australia.

It was at this stage that my ESL employer turned nasty

Well actually it was always known how much of a douche this guy is but now it was on full display.

Our employer claimed that he’d spent money on a recruiter to hire me (including paying for the residency visa) which he was unable to get back after my departure. Since I wasn’t there he started threatening my girlfriend to reimburse him.

He gave her an ultimatum to either work for him for free (be a slave basically to pay off what he considered to be a debt) or he’d get law enforcement involved, and as he’d previously boasted about his connections in the police headquarters this worried me a lot because I didn’t know what he was capable of.

Keep in mind too that here’s a young female living in one of the most conservative areas of the country only a couple of hours north of a Syrian civil war and I was on the other side of the planet unable to do anything.

I had some piece of mind in that there was another expat from the UK (a good friend of ours who was mistreated and screwed over as well) working at the school so she wasn’t completely alone but it was still a hard thing to do leaving her.

The only thing I was capable of doing was booking her a flight out of the country and back to neighbouring Georgia.

After increasing hostility at work from the employer we decided it was safest for her to pack all her belongings over night and get the first flight out of the country the following morning being careful not to be seen on the way to the airport.

It all sounds very dramatic I know but as far as I’m concerned it’s better not to take chances especially in parts of the world where corruption, abuse and neglect of fundamental human rights are more prevalent.

After spending a few weeks back in Georgia waiting for her Australian visa approval she headed over here.

We’ve recently been in contact with our English friend who left in the same manner after the employer reneged on conditions laid out in his contract including his flight home.

I’ve decided to be a little bit vindictive and name this school publicly because I’ve noticed that TEFL.com is still advertising positions there and by mentioning the name here it’s guaranteed to show up on the first page of any Google search query in future by people considering working there.

Bil Çağ Course Center advertises itself as Oxford Language School but hear me when I say that this school has absolutely nothing to do with Oxford University.

They use Oxford textbooks and think that this justifies hijacking that name for their advertising.

It’s not just foreign staff who are abused either. Some of the lovely Turkish people we befriended there are subjected to despicable mistreatment as well.

UPDATE: I later had an even worse experience in Russia teaching English. Read about that here.

Firstly be aware that what happened to us isn’t overly remarkable in terms of bad schools mistreating ESL teachers.

I’ve heard some nightmare stories from friends and others that make my story sound like a fun holiday.

However, this is not intended to frighten anybody away from ESL work as a means to support immersion living and I still believe that teaching is the best option for any native English speakers wanting to travel to learn languages.

1. Make sure to scour the major ESL forums and Google for any teacher feedback on the school

Before you even bother firing off an email to a school or recruiter about an ESL job make sure you check forums like those on Dave’s ESL Cafe and TEFL.net, along with simple Google searches to see what people have said about the employer.

Sometimes you won’t find anything on a particular school but if it’s a chain you might get an idea by reading reviews on other cities (how they treat their staff, pay, etc.).

In our case there was absolutely nothing written anywhere about our school or the city so we took an idiotic gamble.

2. If the school accepts you hastily without putting you through a proper interview process then forget it

I had to go through a very thorough process to get accepted onto the TLG program in Georgia but my Turkish employer was different.

I was never interviewed by phone or Skype.

If an employer anywhere is desperate enough to hire you without seeing your face or hearing your voice it speaks volumes about their quality (I should have thought about this before accepting the job).

3. Try as much as possible to avoid small private schools and stick with government schools and universities

It’s tempting even now for me to apply to small, privately owned places because they’re generally easier to get into.

However this time around I’ll be applying for university work or at the very least entry into the public school system. Perks are usually better and you have no worries about getting paid on time or not receiving severance, flights home, and so on.

4. If there’s anything dodgy or unacceptable in the contract ask to have it changed

We made a stupid mistake accepting our contract in the first place as we were advised not to agree to the amount of hours they wanted us to work but we were in a hurry at the time to finalize our arrangements.

If an employer puts unreasonable requests in a contract or is a bit vague on certain points then refuse to sign it until it’s fixed or forget about it.

5. If a recruiter found you the job, try to keep in regular contact with him/her and form a professional relationship

I’ve learned this from talking to a few friends and especially our friend from the UK who was also teaching at our school in Malatya.

Remember that recruiters have a business themselves and in many places there’s a probation period for new teachers so that a recruiter gets paid after the few months of a new teacher’s employment. This isn’t always the case but in any event it matters to the recruiter how well or badly the new employee is being treated by the school, so call them and give them feedback if things are shit.

My friend did this and the recruiter assisted him in finding another position elsewhere.

UPDATE: After a horror experience of mine in Russia teaching a billionaire family’s kids, I kept in touch with my agent and was offered other jobs.

Hope you found this useful! If so, please share it! 🙂